Wendy Davis faces an uphill battle in Texas, while Drake aims for a slam dunk in Toronto 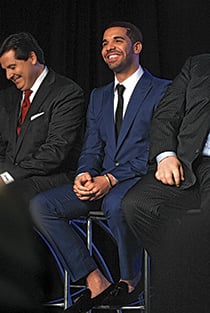 A stunt by Greenpeace to draw attention to Russian oil drilling in the Arctic seems to have worked a little too well. A day after two activists were apprehended while trying to climb an oil platform, the Russian Coast Guard boarded the group’s ship and arrested all 30 crew. Now all the environmental protesters, including two Canadians, Paul Ruzycki and Alexandre Paul, have been jailed after authorities charged them with piracy. President Vladimir Putin has said he doesn’t think the charge fits, but the courts aren’t so sure and have ordered the group to be detained for two months. If they end up being convicted, they will all be there a lot longer. The maximum punishment for that crime in Russia is 15 years in jail.

What would Siri do?

Martha Stewart may know how to fold perfect corners on a bed sheet while whipping up a homemade pumpkin pie, but the domestic diva proved to be at a loss over how to fix her broken iPad. In a series of tweets last week, Stewart complained that she had dropped her iPad on the ground, smashing its screen. “What to do? Does one call Apple to come and pick it up or do I take it?” she wrote, igniting a wave of online incredulity. When an Apple technician failed to show up at her house, Stewart tweeted that she was “still waiting for an Apple rep to come pick up my iPad” because “Steve Jobs gave it to me.” She later told the Today show the tweets were meant as a joke and she was aware that Apple didn’t make house calls. “Of course I know that. I’ve been in Apple stores.”

Canadian filmmakers, typically, are great at telling homegrown stories. So how did our entertainment industry let a golden opportunity like the Quebec maple syrup heist of 2012 slip through its sticky fingers? The caper—which caught worldwide attention last year when Quebec police discovered 10 million pounds of syrup was missing from a St-Louis-de-Blandford warehouse—has all the elements of a big-screen heist film. Yet Hollywood beat our producers to the punch, as Sony Pictures announced last week that Jason Segel (How I Met Your Mother) would star in a movie based on the case. No word yet on whether the Seth Gordon-helmed comedy would film—or even take place—in Quebec.

Change he can believe in

Honesty used to be its own reward. But that was before the Internet. Glen James, the homeless Boston man who found a backpack containing $2,400 in cash and $40,000 in traveller’s cheques and turned it over to police, has become a global celebrity. Now, one of his new admirers has started an online fundraising campaign to help get James under a roof. In just 10 days, the site has collected more than $150,000 in donations from almost 6,000 individuals. One hopes some of the generosity will spill over to other homeless people. There are 7,000 of them in Boston alone.

She already has the shoes

This past summer, Wendy Davis went from an anonymous state senator to feminist icon following her 13-hour filibuster against Texas’s tough new restrictions on abortions. The talkathon only succeeded in delaying the changes, but it gave the 50-year-old Democrat instant cachet. (Sales of the pink Mizuno jogging shoes she wore on the floor of the legislature skyrocketed.) Now comes word that she is running for governor. Rick Perry, the Republican incumbent who championed the new law, has decided not to seek a fourth term. Davis will face an uphill battle, however. The last time her party won the office was in 1995.

As the Art Gallery of Ontario’s chief business officer, Heather Conway improved the museum’s attendance by 20 per cent in an era of extreme budget cuts. Now she’ll have to perform the same cultural alchemy on a much larger playing field as head of CBC’s English language services. While her predecessor, Kirstine Stewart, had the cash to create such made-in-Canada success stories as Arctic Air and Being Erica, Conway will have $115 million less to play with due to budget cuts—not to mention the future of Hockey Night in Canada hanging over her head, thanks to upcoming contract negotiations with the NHL. “We need great fiction, and there are great Canadian stories that should be told on CBC,” she told the Globe and Mail. “But we also have to have some fun.”

The commissioner of Major League Baseball, Bud Selig, has announced his intention to step down after the 2014 season. The 79-year-old, who also owns the Milwaukee Brewers, has been in the job since 1992, when baseball’s proprietors banded together to get rid of their last independent overseer, Fay Vincent. The game has grown under Selig’s tenure; revenue is up more than 400 per cent, and baseball’s new national TV deals bring in $1.5 billion a year. But he also presided over the sport’s continuing problems with performance-enhancing drugs and the labour dispute that cancelled the 1994 World Series. Fans shouldn’t pop the champagne cork just yet, however. Selig previously announced plans to retire in 2009 and 2012.

Cheerleaders to city: Bring it on

Proving themselves to have a significant lack of team spirit, police in London, Ont., slapped cheerleaders with a $140 ticket during homecoming celebrations at the University of Western Ontario. After the Western Mustangs cheerleaders belted out a few impromptu numbers en route to the university’s football game, three male squad members tossed a female teammate into the air, earning themselves a “nuisance” fine. “This is just stupidity on the part of whomever issued the ticket,” said coach David-Lee Tracey. “It’s homecoming. Are we not supposed to generate spirit? We’re the cheerleading team, for goodness sake.” A police official said the department is investigating the matter.

Stephanie Smith enraged feminists the world over last week when she unveiled that she was the author behind the blog 300 Sandwiches, which chronicles her attempts to make her boyfriend enough snacks to score an engagement ring. Hundreds of angry readers decried the blog as a sexist throwback, while others admitted they were entranced by Smith’s gourmet sandwich pictorials, even if they were offended by lines such as: “How would I finish 300 sandwiches in time for us to get engaged, married and have babies before I exited my childbearing years?” A reporter for the New York Post’s gossip pages, Smith insisted she started the project last June as a joke after boyfriend Eric Schulte told her she was “299 sandwiches away” from a proposal. “I thought at least one person would find the humour in the idea of sandwiches for an engagement ring,” she wrote. So far, Smith is on sandwich No. 177. No ring so far.

A little knowledge can be a dangerous thing. At least when it comes to followers of the “Freemen on the Land” philosophy, who believe they can unilaterally opt out of Canada’s laws, taxes and regulations. Andreas Pirelli took over a Calgary home that he was renting, placing a $26,000 lien on the property and declaring it an “embassy.” But it turns out the police don’t recognize imaginary diplomats. Last week, Calgary cops arrested Pirelli, who also goes by the name of Mario Antonacci, on outstanding warrants issued in Montreal. They date back to 2007, when he tried the same stunt with a landlord in Quebec.

Taking a cue from his hip-hop mentor Jay Z’s partnership with the Brooklyn Nets, Canadian rapper Drake is also lending his star power to the NBA, acting as the “global ambassador” for the Toronto Raptors. Tim Leiweke, president and CEO of Maple Leaf Sports and Entertainment, called the partnership “a new age” for the struggling basketball team, which averaged a mere 84.8 per cent attendance while on the road last year, a near-league low. Yet the 26-year-old Drake, better-known to Degrassi fans as Aubrey Graham, says he will do “everything in my power to increase the brand . . . I want us to be one of the biggest teams in the league.”

Every dog has its day

After Bella the Snorkie got attacked by an aggressive German shepherd in Ottawa last week, the mini Schnauzer-Yorkshire terrier mix knew exactly where to go. Instead of retreating back to her concerned owner, Bruce Simpson, the 17-month-old pet ran all the way to the emergency department at the Ottawa Hospital’s Civic campus, about a kilometre away. “The dog came running up and kind of looked like it was in distress,” Keith Buchanan, the superintendent of operations for the paramedic service, told the Ottawa Citizen. “She was terrified.” Suffering several bites and a strip of torn skin, Bella underwent three hours of surgery and was released to Simpson late the next day.

British tabloids are in a lather about the possibility that Prince Andrew and his former wife, Sarah Ferguson, duchess of York, are getting back together. Ferguson added to the speculation at this weekend’s Children’s Bath Literature Festival, saying “the story has a happy ending all the time.”