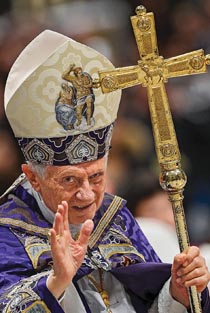 On the side of Angels

Ontario Judge Maureen Forestell may be the Hells Angels’ only friend on the bench. The Ontario judge ruled that a 2007 police raid had no right to seize their gold, diamonds, belt buckles and leather goods just because they had the Angels’ “death head” logo emblazoned on them. Forestell said the bling wasn’t directly related to any crime sprees or attempts to intimidate people. In fact, she added, the club has a rule requiring its members to remove their merchandise “when committing offences,” and she ordered the swag returned to the bikers.

Too random an act of kindness?

New York City cop Larry DePrimo became a seasonal hero last week when a photo of him giving a pair of boots and socks to a barefoot man on a frigid Manhattan night went viral. While the 25-year-old police officer was instantly beloved—and earned an invite to the Today show—it took New York’s media a few days to track down the man with the new boots. When they did, the story grew a lot more complicated. Jeffrey Hillman isn’t homeless, as he appeared to be. The deeply troubled Army vet has an apartment paid for by a benefit for homeless veterans. It also turns out Hillman is still barefoot. He told reporters that although he appreciated the cop’s gesture, “I could lose my life” for wearing the $100 Skechers boots on the street.

Your ticket to Mars

This year, Internet billionaire Elon Musk’s SpaceX, a private firm that builds spaceships, docked its Dragon spacecraft twice with the International Space Station—a first for a private company. Musk has bigger ambitions: he wants to put a human colony on Mars. Speaking at the Royal Aeronautical Society in London last week, the co-founder of PayPal and Tesla Motors said he’d build a colony of 80,000 people willing to shell out $500,000 for a ticket, the price of a middle-class home in Toronto. No word yet on a timeline, but the 41-year-old has said he’d like to retire on Mars, so he can’t put it off too long.

Canada’s world junior team could end up benefiting from a little star power if the NHL lockout persists over Christmas. Headlining this year’s selection camp roster is Ryan Nugent-Hopkins, the Edmonton Oilers star who tallied 18 goals and 34 assists in the NHL last season. The 19-year-old would surely help Canada in its quest to win a gold for the first time since 2009 and add to a tournament that will be like manna from heaven for the game’s hockey-starved fans. But even in their time of need, the devotion of Canadian fans will be tested—Team Canada’s first three games are due to be broadcast live from Russia at 4:30 a.m. EST.

Who was the first giggling schoolgirl to get a message with the acronym “OMG”? Winston Churchill, it emerged this week. Its first known use was not in a text message or an email, but in a 1917 letter from the British admiral Lord Fisher to Churchill. Taking time out from the war, Fisher mentioned a rumour of a possible knighthood, adding “O.M.G. (Oh! My God!).”

Few among us are able to land fantastic, high-profile jobs no matter how badly the last one went. The exception being Jeff Zucker. Last week, the former NBC president—famous for taking the network from first to fourth place, and for disastrous ideas like giving Jay Leno a prime-time show—was named the new head of CNN Worldwide, the struggling news channel. Zucker, a former producer of the Today show, isn’t promising a turnaround: ratings are “not what defines the health of this business,” he said last week after accepting the job. He should know.

On Monday, Pope Benedict XVI joined Twitter. By day’s end, he’d racked up almost a quarter of a million followers—without having issued a single tweet. “The Pope is not the type of person who is checking his iPad or BlackBerry at meetings, so the tweets aren’t going to be spontaneous like those from most other Twitter users,” said the Holy See’s media advisor, Greg Burke. @Pontifex, who is expected to send his first tweet next week, will be dispensing “pearls of wisdom” in eight languages, he added.

More exits in Quebec Montreal’s political landscape is undergoing a seismic change as politicians depart, one after the other. Since the high-profile resignations of Gérald Tremblay and Gilles Vaillancourt, the mayors of Montreal and Laval, two more mayors have announced their resignations. Richard Marcotte, the mayor of Mascouche, a suburb just north of Montreal, resigned this week, seven months after his arrest on charges of fraud, corruption and conspiracy. Marcotte, who denies the charges, is alleged to have received “benefits” in return for municipal contracts. Meanwhile Claude Trudel, the 70-year-old mayor of the Montreal borough of Verdun and a staunch Tremblay supporter, stepped down this week. Calling himself “shaken” by the departure of Montreal’s long-time mayor, who resigned amid a corruption scandal, Trudel rejected playing a role in the coalition formed by Montreal’s interim mayor, Michael Applebaum.

Who will stand up for dogs’ rights? New Toronto Blue Jays pitcher Mark Buehrle, that’s who. The former Marlin—and long-time pit bull owner—clashed with Miami’s ban on the dogs, but had the option to live in another county. Since the dogs are banned throughout Ontario, Buehrle is considering moving his family to New York state and making a daily two-hour commute to the Rogers Centre. Buehrle, who describes his pit bull as “so loving and so awesome,” complains the law is “discriminatory,” based on nothing but “the way a dog looks.”

Trading one jail for another

A B.C. woman involved in what American authorities call the “largest eco-terrorism case in United States history” turned herself in last week after more than a decade on the run. Rebecca Rubin, 39, is facing charges in three states, including arson, conspiracy and use of a destructive device, relating to firebombing wild horse corrals in Oregon and California and a fire at a Colorado ski resort. Rubin “was tired of life passing her by,” said her lawyer, Ian Donaldson. “She had been living in a prison without walls.”

Last spring, the bodies of 54 sled dogs were pulled from a mass grave near Whistler, B.C. Robert Fawcett, a former part-owner of Howling Dog Tours, pleaded guilty in connection with the deaths of nine, saying the cull was necessary after a post-Olympics slump in sales. But his actions haunt him to this day, he revealed in a statement delivered at his sentencing hearing last week. Fawcett, who received death threats after news of the killings broke, suffered a nervous breakdown and was sent to a mental-health facility. The judge stopped short of giving him jail time, handing him three years’ probation, 200 hours of community service and a $1,500 fine. Fawcett still has nightmares about killing the dogs. “I will never stop feeling guilty for the suffering that those dogs endured that day,” he said through his lawyer. “I feel like a part of me died with those dogs.”

Guy Fieri, the Food Network star with famously frosted tips, was spotted in Toronto filming Diners, Drive-Ins and Dives this week. Rumours put him at local greasy spoon landmarks like the Lakeview, Caplansky’s Deli and Hey Meatball. Fieri’s tour was capped off by a cooking session with Toronto rapper Drake. The bombastic chef seems to have recovered from a deliciously nasty review of his restaurant, Guy’s American Kitchen & Bar, in which New York Times critic Pete Wells wrote: “When you hung that sign by the entrance that says, WELCOME TO FLAVOR TOWN!, were you just messing with our heads?”

What was that about ‘filth’?

Angus T. Jones is no Charlie Sheen. But the Two and a Half Men co-star seemed to be next in line to get fired when a video of him denouncing his popular sitcom as “filth” and urging viewers to tune out went viral last week. But fans paid him no attention, and Jones backed down, quickly issuing an abashed public apology. Unlike Sheen, who soon got another show, Jones is totally expendable: he wasn’t even scheduled to appear in the two episodes following the outburst, and rumours have it that producers are considering replacing him with popular guest star Miley Cyrus.

I’ll text it to you—what’s your number?