Nobody should believe Canadian politicians who promise to fight climate change

Paul Wells: Most governments routinely blow their emissions reduction targets, punting solutions down the road. Why should anyone expect that to change? 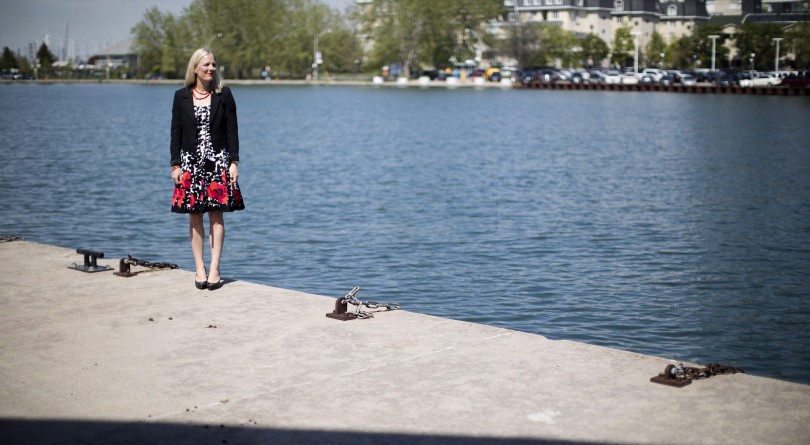 Environment Minister Catherine McKenna is pictured after delivering a policy announcement in Toronto , on Wednesday May 31 , 2017. McKenna says the Canadian government remains committed to the Paris Accord amid concerns that the U.S. will walk away from the landmark global climate agreement. (Chris Young/CP)

Anyone wondering why Canadians sometimes lose faith in government’s ability to get anything done should read a report that the country’s auditors general released at the end of March.

The report, Perspectives on Climate Change Action in Canada, is an extraordinary piece of work. Canada’s federal auditor general, Michael Ferguson, worked with his counterparts in nearly every provincial government. (Quebec didn’t participate. The province often declines to join big federal-provincial projects.) It’s “the first time that nearly all legislative audit offices in Canada have coordinated their work in this way,” the report says.

What the nation’s government bean-counters found was a mess, and on a file most governments like to claim is a top priority. “Overall, we found that actions taken by governments to date to address climate change across the country have fallen short of the governments’ commitments,” the auditors general write.

This matters because Canada has already spent nearly three decades burnishing a nasty reputation as a place that doesn’t live up to its climate change commitments. The country missed its carbon emission targets in 1992 and 2005. It’s going to miss its 2020 target by a lot, perhaps 20 per cent. And while the next target, for 2030, has long seemed comfortably distant, that target is now looking perilously hard to hit. “Meeting Canada’s 2030 target will require substantial effort and actions beyond those currently planned or in place,” the auditors write.

In a round of interviews after the auditors’ report was released, federal Environment Minister Catherine McKenna argued in effect that the report is out of date. The Conservative government of Stephen Harper was in place through most of the period the auditors had examined, she explained. It’s not a persuasive answer for a couple of reasons.

READ MORE: How climate change is costing you in the vegetable aisle

First, the report also tracks action at the provincial level, and several provinces that had marketed themselves as beacons of virtue in contrast to Harper—Ontario, British Columbia and Manitoba under its former NDP government—turn out to have underperformed, too.

This is where the auditors’ report turns into a guided tour of governments that promise more than they deliver—not only when the final deadline to hit a target comes, but repeatedly along the way. Governments that are serious about meeting targets do certain highly characteristic things, the auditors write. They draw up “long-term, detailed action plans.” They “actively involve partners and stakeholders” outside government, so there’s broad support across society for what needs to be done. The plans reach across the whole government, not just an isolated environment ministry. And governments that really want to deliver results regularly monitor and report on progress, in ways any interested citizen can find and read.

Repeatedly, the auditors found these best practices have often been breached, in jurisdictions right across the country.

In Manitoba, for instance: “In 2008, the government issued a plan with a legislated target: to reduce greenhouse gas emissions to six per cent below the 1990 level by 2012,” the auditors write. “The 2012 target was not met.”

RELATED: Are ‘green’ cities a big part of our problem with climate change?

Maybe the failure to meet the target came as a huge surprise? No, it really didn’t. “The government was aware by the fall of 2009 that [the target] would not be met, but it did not update the 2008 plan or the 2012 target until December 2015.” But surely the 2015 plan was prepared with greater seriousness than its failed predecessor? Wrong again. “The 2015 plan had only high-level strategies. The strategies lacked accompanying details, as well as estimates of expected emission reductions and costs.”

The report is studded with depressing passages like that. In British Columbia, “reporting done in 2016 provided less detail than reporting in 2012 and 2014.”

In 2011, Ontario drew up an “action plan”—the label turns out to be ironic—for government-wide adaptation to climate change that was already under way. The plan was designed to last three years, until 2014. In 2016, two years after the plan was supposed to have been implemented, “only 30 per cent of the action plan items had been completed.”

As a general rule, auditors general are a courteous bunch, so their report makes room for an official response to their critiques from the country’s federal and provincial deputy ministers of the environment. The response amounts to a promise to finish homework that’s been ignored until now. Canada’s December report to the United Nations on climate progress “shows that Canada is making strong progress toward its 2030 climate target,” the deputy ministers write cheerfully. This will depend very much on what you call strong progress. What the report to the UN actually says is that Canada will miss its 2030 target by 66 megatonnes of carbon, which is about 22 per cent of needed reductions.

That figure—the amount by which Canada expects to miss its fourth international emissions commitment in a row—has grown by half since Ottawa’s last report to the UN only 18 months earlier.

That’s the other problem with McKenna’s claim that the problems with Canada’s climate strategy are all a relic of the dark Harper years. Since 2015, when the Liberals were elected and McKenna became the federal environment minister, Canada has actually been moving further away from its 2030 target.

The report from the auditors general is useful background for what’s supposed to be a crucial year. In December 2016, Trudeau and every provincial premier except Saskatchewan’s Brad Wall signed a national climate plan. The plan says that “all jurisdictions will have carbon pricing by 2018.” A year later, at the end of 2017, McKenna clarified that provinces have until the end of the year to introduce carbon-pricing schemes, whether they be carbon taxes or cap-and-trade regimes.

It’s hardly clear how the goal of pricing carbon coast-to-coast can be met by the end of this year. Saskatchewan’s new premier, Scott Moe, is as deeply opposed to a carbon tax as his predecessor was. Ontario Conservative Leader Doug Ford and his Alberta counterpart Jason Kenney both oppose carbon taxes. Both seem likely to win the next provincial elections, in June in Ontario and next spring in Alberta. Together, Saskatchewan, Ontario and Alberta have more than half the country’s population. That’s serious opposition to McKenna’s plans, and it’s hard to imagine an outcome to her dispute with some provincial politicians that won’t involve a lengthy court battle.

But the evidence of the auditors’ report suggests open opposition to the federal climate plan won’t be the only problem. Foot-dragging and empty promises from governments that claim to take climate change seriously are deeply entrenched habits across Canada. There’s no reason to expect that won’t continue.