Obama and Harper: United by indifference 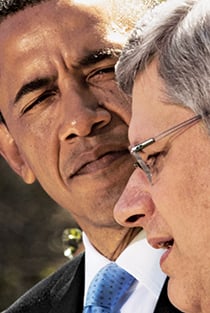 It always comes as a relief when a doomed relationship finally sours into real animosity. Enough of frosty grins and forced bonhomie. Let the hostilities commence. Take Stephen Harper and Barack Obama. You may have to, since apparently neither can take much of the other.

On Sept. 26 in a New York City hotel ballroom, the Prime Minister sat onstage in front of a business audience and took questions from CNBC TV anchor Maria Bartiromo. When the questions turned, inevitably, to the possibility that the U.S. President might reject the Keystone XL pipeline from Alberta into the U.S., Harper’s answer amounted to an assertion that Obama has no say in the matter.

“My view is, you don’t take no for an answer,” he said. Which is odd, because the decision to approve Keystone lies, ultimately, with Obama. That’s precisely why the U.S. opponents of oil-sands development have pressured him to reject the project: because it’s one of the few decisions in the messy U.S. system that is the President’s alone. So “no” does indeed seem to be one of two possible answers on Keystone.

What if Obama says no? “We haven’t had that,” Harper said, “but if we were to get that, that won’t be final. This won’t be final until it’s approved and we will keep pushing forward.”

It was an astonishing statement, and I’m sorry Bartiromo didn’t come back to push Harper to explain his answer. It was oddly familiar, and it took me a while to place the precedent. In 1997, when Lucien Bouchard was the premier of Quebec and Stéphane Dion was the Chrétien Liberals’ lead anti-separatism enforcer, Bouchard finally decided he had had enough of Dion’s impertinence. “I am not listening to Mr. Dion,” Bouchard said. “As far as I’m concerned, he doesn’t exist.”

It has the virtue of novelty, this strategy of publicly proclaiming that a presidential no doesn’t mean no. Harper’s words were echoed, indeed amplified, by Chris Alexander, his new minister of immigration. “There’s a logic to our energy policy that is more powerful than any political leader,” Alexander told CTV’s Question Period.

There may indeed be a logic to the government’s energy policy, but it’s not easy to discern. Or rather, once discerned, it tends to mutate. At the end of August, Harper’s staff said he had written a letter to Obama offering to tailor emissions regulations for the Canadian oil sands to suit U.S. preferences. It’s not the sort of letter one normally sends to someone whose answers don’t matter.

And not that long ago, at the end of 2011, Harper’s line was not that Keystone would proceed no matter what; it was that it didn’t matter whether Keystone went ahead or not, because the real action was elsewhere. Harper told CTV anchor Lisa LaFlamme he was going to ship oil-sands oil to clients who were grateful for a change. “I ran into several senior Americans, who all said, ‘Don’t worry, we’ll get Keystone done. You can sell all of your oil to us,’ ” Harper said then. “I said, ‘Yeah, we’d love to, but the problem is now we’re on a different track.’ ”

A few things are going on here. First, the “different track” that so strongly appealed to Harper at the end of 2011 was China, and that turned out to be harder than it seemed. Sustaining the attention of China’s leadership would have required frequent visits and reciprocal access to the Canadian market. But nobody on Earth gets frequent visits from Harper. And the reciprocal access provoked a major political backlash when state-owned Chinese companies started buying into the Alberta oil patch.

So Canada is stuck, one way or another, with the United States. He would prefer that didn’t mean he was stuck with Obama, and indeed for most cross-border trade he isn’t. Only on Keystone does he need Obama’s personal attention.

And there are many competing claims on Obama’s attention. These include a frontal Republican assault against health-care reform that has shut the U.S. government down; mass murder by the Syrian regime, compounded by Obama’s rash claims that he would do something to stop it; and the endless fun hours he must spend deciding whether the new regime in Iran can be trusted to reform. It’s an imposing list. It’s hard to imagine how far down that list any Canadian file must fall.

Two other leaders might have a personal relationship to fall back on, but Harper and Obama have this much in common: Neither is big on personal relationships. Neither is wired to think, in any consistent fashion, about foreign affairs. Their relationship had been characterized by growing mutual indifference and incomprehension. But even that was too good to last. Fox News tells Harper Obama is a clown, or worse. Obama hardly ever hears about Keystone except in the context of the polarized battle for control that has defined his relationship with Congress, and the messages he gets from Harper are indistinguishable from the messages he gets from his Republican tormentors. No wonder each has come to wish the other wasn’t there.

On the web: For more Paul Wells, visit his blog at macleans.ca/inklesswells