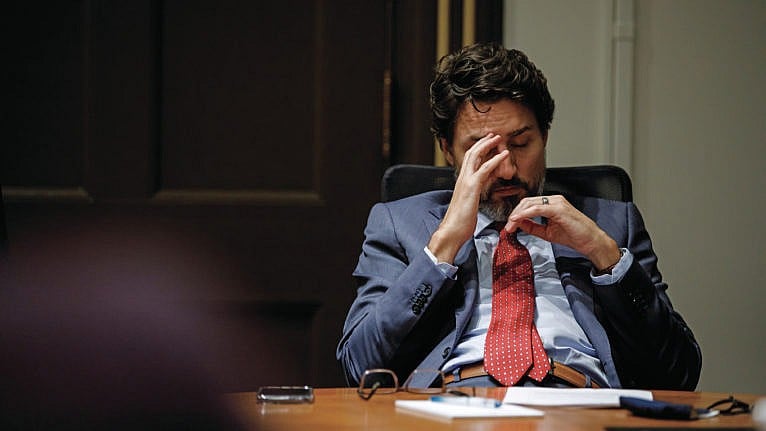 After Donald Trump had been defeated by president-elect Joe Biden, but before Trump had emotionally processed that fact, Justin Trudeau gave a press conference. The Prime Minister was asked whether he had spoken “too soon” in offering his congratulations to Biden and what he could do about Trump’s refusal to concede. He was pleased to congratulate the incoming president and had full confidence in the American electoral system, Trudeau said, and his government would work with the current administration until the end of January, at which point they would work with the new one.

“President Biden, once he’s sworn into office, will be my third American president,” Trudeau said. “We’ve demonstrated an ability to stand up and defend Canadian interests throughout, which we will do as we move forward.”

There was something novel—jarring, even—in hearing this Prime Minister point out that he had seen three Oval Office occupants come and go during his time, like some wizened old sea captain squinting dispassionately at one more sunset with no surprises to offer.

Contrast that with the end of 2013, when Trudeau was the new Liberal leader and then-prime minister Stephen Harper began placing his people in the Tory firmament for an election that would take place 18 months into the future. Far from being chagrined at the idea of running against a man who had won three elections in a row, Trudeau was delighted to be facing off against Harper, because his team planned to frame the election around a clear contrast; as he put it at the time: “I need old.”

It’s a reasonable bet that a federal election will take place in 2021. And whether Trudeau calls, forces or allows one at what he believes to be an opportune moment, he will do so as a grizzled veteran, and not some impetuous wunderkind. On Christmas Day 2020, Trudeau will enter his 50th year, making him the oldest of his competitors, if only by 13 months over Conservative Leader Erin O’Toole. That was true during the 2019 campaign, too, but this time around, Trudeau will be an experienced hand in a field of fresh faces, with O’Toole and Green Party Leader Annamie Paul each leading their parties through their first campaigns, while NDP Leader Jagmeet Singh is at the helm of his second, but retains a freshman quality.

Whenever the election occurs, it will be Old Man Trudeau and a pack of newbies on the trail.

And the shift goes well beyond shallow branding; many of the promises and policies that were most pointedly associated with the fresh approach of the Trudeau government have evaporated or curdled.

Electoral reform is dead in the water. Trudeau’s call for government to be “open by default” has become an access to information system so backlogged and recalcitrant that it won’t comply with the information commissioner’s own ruling on a complaint, compelling Caroline Maynard to go public with her unmet pleas for “strong leadership” and more funding to keep her system functioning. Before the end of the year, the Liberal government was set to unveil the climate legislation that aims to get Canada to net-zero greenhouse gas emissions by 2050, but the bill would reportedly contain “mandatory targets” with no enforcement mechanism. Canada failing to meet its climate targets is a perpetual problem that long predates the Trudeau Liberals, but it would be a uniquely bad showing for a government that has made action on climate change and adherence to scientific advice so central to its mission.

In the game of minority parliamentary chicken that saw the Conservatives demand a dump truck full of documents and carte blanche to call witnesses related to the WE Charity scandal in October, Trudeau’s response, which successfully called their bluff, was a flinty-eyed veteran move.

“Facing down an opposition threat without giving ground is not the work of a political ingenue,” says John Duffy, a long-time Liberal adviser and founder of StrategyCorp.

READ: On climate, at last, Justin Trudeau is all in

To Duffy, the best-before date on a politician is determined in large part by a sort of dance between the vision of the country that a leader offers and where citizens are or want their country to be. Trudeau has long embodied a Canada with features like legalized cannabis, unambiguous support for LGBTQ+ people and gender equity, democratic reform and serious action on climate change, he says, and many voters felt like the country was already there and Stephen Harper’s government was very much not. “2015 was magical,” Duffy says. “Part of the reason it was magical is that Trudeau was able to embody and project and promise a version of Canada that I think a lot of people thought was overdue.”

What happens to most governments that are good at retaining power, he says, is that relationship eventually flips and the government seems past its prime, becoming a throwback people are ready to move on from.

“I don’t see any party having an offering that eclipses Trudeau’s fundamental characteristic, which is that he’s contemporary,” says Duffy.

That’s likely true as far as it goes, but there is more than one direction you can travel to end up seeming out of step with the country.

And O’Toole’s strategy for the campaign, whenever it begins, makes it clear that his camp is betting on a very different sort of mismatch between leadership and the national mood.

There are two key contrasts with Trudeau that O’Toole’s team plans to spotlight. The first is that he’s a pure suburbanite—he grew up in the ’burbs, lives there now, represents suburbanites—which is a proxy for being middle class and understanding the problems of normal people who did not grow up with a millionaire prime minister father. The second defining trait O’Toole will emphasize to voters is his military service in the Royal Canadian Air Force, which is intended to demonstrate patriotism, duty and leadership, but also the ability to prove yourself based solely on your loyalty and job performance. The first contrast is what previous Conservative leader Andrew Scheer tried strenuously to leverage in 2019, but the second takes a page from the Stephen Harper playbook of seeking out elements of Canadian patriotism that can belong to Conservatives when the Liberals try to wrap themselves in the flag.

But, more to the point, both of these facets of O’Toole speak to an attempt to offer a very mature, grounded, old-school sort of leadership, in keeping with the Tory strategy to expand their voter base by drawing in working-class people who don’t normally turn out at the polls.

In mid-November, Angus Reid found that Trudeau’s personal approval rating had rebounded to 49 per cent, from a dip into the mid-40s over the summer while the WE controversy roiled. Two-thirds of Canadians think the Liberal government has done a good job handling COVID-19, and that opinion has remained steady since the spring.

One-quarter of Canadians, meanwhile, said they had no opinion of O’Toole one way or the other, but that was down from 39 per cent right after he won the leadership two months earlier. His favourability rating increased by six points over that time, to 36 per cent, but his unfavourability climbed by nine points as well, to 40 per cent. Singh is viewed favourably by 49 per cent of Canadians, compared to 41 per cent who don’t like him, while 50 per cent say they have no opinion of Paul.

But if polling paints an image of a Prime Minister who would be running against a field of walking question marks if the campaign started tomorrow, O’Toole’s camp says that is both expected and not a concern.

Tory research shows that while Trudeau’s personal brand remains quite strong, his vulnerabilities lie in “the old Liberal problem of entitlement”—with SNC-Lavalin looming larger than WE Charity in focus groups—along with untrustworthiness and disappointment, a Tory strategist who spoke on background says. “I’m convinced you won’t succeed—I’ve been convinced ever since he became leader in 2013—in making people dislike Trudeau, apart from people who identify as Conservatives. And you won’t make people believe that he’s in politics for the wrong reasons or he’s driven by the wrong things,” they say. “But he is vulnerable in those three areas.”

The big political X factor, as it has been in life in general for the past year, is the pandemic. “It’s not just a top-of-mind concern, it’s the lens through which they view everything else,” the Conservative strategist says.

Which is why the battle plans for a probable 2021 election are not being drawn in anticipation of a fight over being modern or likable or even empathetic or competent in the midst of a still-unfolding crisis; this is simply about asking voters to choose a steady hand on the wheel in still-stormy seas.

This article appears in print in the January 2021 issue of Maclean’s magazine with the headline, “Old man Trudeau.” Subscribe to the monthly print magazine here.