Niall Ferguson on the hot seat

... on robbing the young and what he really meant by that crack about Keynes 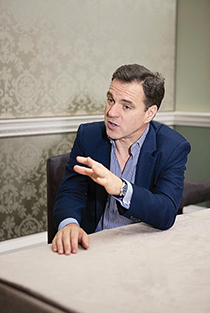 The often controversial Niall Ferguson, 49, is one of the world’s most prominent historians. A specialist in international and economic history, a professor at Harvard and a senior research fellow at Oxford, Ferguson is the author of The Ascent of Money and Civilization: The West and the Rest, among other works. Married to feminist and atheist activist Ayaan Hirsi Ali, the British-American scholar is also a vocal critic of U.S. President Barack Obama. Ferguson’s latest book, The Great Degeneration, which originated in 2012 as the BBC’s prestigious Reith Lectures, condemns what he sees as an era of decline in the West, pinning the blame on our deteriorating institutions.

Q: You have a reputation, rightly or wrongly, as a Western triumphalist, and now you’re writing about Western decline. Is this an about-turn?

A: I’m not sure there’s anything triumphalist about the writing I’ve done. In both Empire and Colossus I argued that it was highly unlikely that the United States could replicate British-style empire. Colossus is a pessimistic book— its subtitle was actually The Rise and Fall of the American Empire. That was 2004. Civilization similarly was a book about the end of Western ascendancy. So I think this book is a fairly natural sequel. There are people who like to pretend that I am a neo-conservative triumphalist, which I never was. They just never bothered to read my books because it’s much easier just to make these things up.

Q: In Civilization you wrote how the spread of the West’s “killer apps”—essentially its good institutions and practices—ended its hegemony, but now your focus is not on everyone else catching up but real decline in the West.

A: There are two unrelated processes at work, one of which was essentially benign, and that is the rest of the world getting better at economic and political organization. That’s fine. The second process is insidious: Western societies are getting less good at being the West. That’s the central theme of The Great Degeneration—the institutions that used to be particularly strong in North America and in Western Europe are not as good as they were. The book is an attempt to say, “Look, here are some perhaps not so obvious institutional pathologies we should try to cure.” Some of them are U.S.-specific, and I think it’s worth saying that in many respects Canada is in a better place institutionally on actually most of these issues: the public finances are better, you don’t have quite the same hypertrophic financial regulation and so on. Some of the problems are specifically European and indeed, you know, if one’s talking about really bad Western institutional degeneration, look no further than Italy. But it’s possible to see variations on this theme in most places in the developed world, including Canada, and it makes sense to talk about them as a general Western phenomenon.

Q: Your definition of institutions is broad, and you divide your degenerations over democracy, law, financial regulation and the decline of civil society. Why do you stress law and regulation over democracy?

A: The story of institutional history is best thought of in terms of laws and the different legal systems that evolved. That’s under-emphasized in what we tell ourselves about Western history. In the cartoon version we attach more importance to democracy, but democracy can’t really explain that much about Western success because it’s a relatively late phenomenon—Western ascendancy after 1500 is clearly based on an institutional secret sauce other than universal suffrage, which essentially comes in the 20th century. The critical issue is that the executive is subordinate to the law, and that’s what makes the 1688 Glorious Revolution important in the case of England. And it’s clear that the most important issue in China is not should they have elections, which seems a long way off, but should the [Communist] party be subject to an independent judiciary, which it currently isn’t. That’s the big question that remains to be resolved there, and it will be resolved pretty soon. We should recognize what are the really important institutional changes and not kid ourselves that if you hold elections in, say, Egypt, everything’s going to be fine.

Q: The worst of the democratic deterioration, as you describe it, lies in contemporary politics’ selfishness, the way it’s broken what Edmund Burke called the intergenerational pact.

A: Under democracy, the young and unborn are always disenfranchised and it doesn’t really matter whether there are lots of them or relatively few of them. What we’ve seen post-1945 is that they are potential victims of a consistent policy that postpones payment, championed by politicians who desperately want the costs of whatever they do to be borne by future generations. It boils down to intergenerational inequity. We should just start accounting honestly for public finances instead of using these dodgy conventions that any company could be convicted of fraud for using. Start looking at governments in the way that we look at companies and ask, “Where’s the balance sheet? What are the liabilities? What are the assets? What is the time horizon beyond 10 years?” It’s a scandal the U.S. government and the Congressional Budget Office only rarely look beyond that time frame. We need to start a long overdue overhaul of the conventions of public accounting. Now, Canada is in a much better place, partly because of fiscal reform, partly because of demographics, partly because of resource endowment, but that’s not an argument for not doing things. In fact, a country like Canada would benefit, would look better, if we had honest public accounting, because we would then see that the Canadian balance sheet is way better than the U.S. balance sheet

Q: You were talking about this issue when you made your ill-considered joke about economist John Maynard Keynes not caring about the future since, as a gay man, he had no children.

A: What I should have said—instead of that unfortunate aside which then took on vast significance, greater than every single book I’ve ever written—is that Keynes was reacting to what he saw as excessive Victorian concern about later generations. He actually did say, “Those walk most truly in the paths of virtue and sane wisdom who take least thought for the morrow.” That’s Keynes. So I think the point that he was inclined to discount the future is a valid one; my mistake was to link that to his sexual orientation.

Q: You write that institutions weaken the power of clans. Do they have to do so in order to be effective?

A: Yes, that’s enormously important. Long ago Scotland was notoriously a clan society, but now, as a Ferguson, I don’t feel any great kinship with Sir Alex Ferguson, Sarah Ferguson or any other Ferguson. It’s extremely difficult to run a law-based society when the claims of clan transcend the claims of law, and this is a major problem in large parts of the underdeveloped world to this day. In places like China you have something slightly looser, guanxi, the idea of connections, which don’t necessarily correlate to kinship, especially post-Cultural Revolution, post-one-child policy when the kinship structures have kind of fallen apart. But there’s still a sense that you do things for connections and not because of or by the rules, and that’s a really difficult transition to make, but Scotland made it. When I’m trying to cheer myself up about the prospects of, say, Afghanistan, I remind myself that Scotland was the Afghanistan of 17th-century Europe, warring mountain tribesmen and religious zealots in the lowlands, and 100 years later you have the Scottish Enlightenment.

Q: Among the many enemies of the rule of law, you single out bad law. Why?

A: I argue that we have fallen into the trap of believing that very, very complex laws addressing every conceivable contingency are good but, in fact, common-law systems in England and in North America were once highly conducive to economic innovation because they adapted, they were evolutionary, rather than prescriptive. We have slipped into what I call codification mania, a very dangerous road to go down, leading to the rule of law being replaced by rule by lawyers because the rules are no longer transparent or simple, nor is access to justice relatively easy.

Q: Another problem with our politics and our regulation is that they have become penalty-free. There are no exemplary hangings of bankers such as Voltaire said the English used to inflict on their admirals—pour encourager les autres. Why is there no longer a penalty for reckless mistakes and negligence?

A: This is a puzzling thing, and I think it’s one of the unintended consequences of the regulatory pathology. If you create these enormous edifices of regulation, as well as choking growth, you make it so all people have to do to stay out of jail is be compliant. They don’t have to necessarily do the right thing, they just have to be able to say, “We complied with the regulations,” and then if there’s any further issue there’s a civil suit and you pay your $100-million fine and carry on, which was the case in more than a few instances during the financial crisis. There’s no discretion for a supervisory authority to say, “This is a bad guy, we’re going to revoke his licence,” or even send him to jail.