One in four Canadians hate their political opponents

Polarized voters are ‘fearful and frustrated,’ and more likely to think the world is getting worse over time 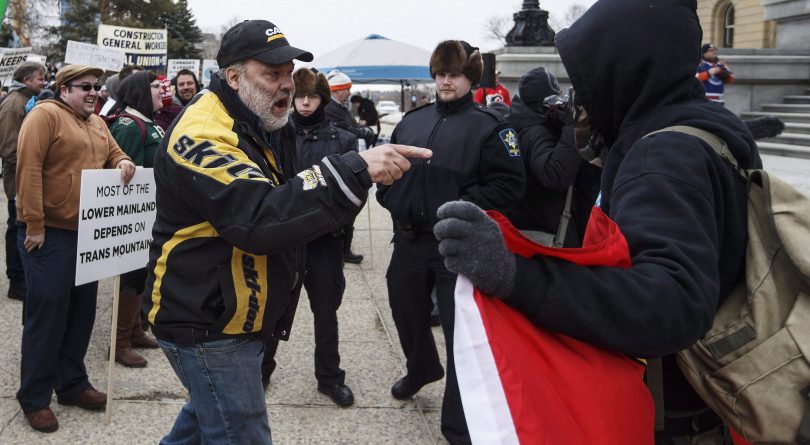 A pipeline supporter confronts an anti-pipeline protestor, during a rally in Edmonton, Alta., on April 12, 2018. (Jason Franson/CP)

If the 2019 federal election seems destined to be a battle of furious wedge issues and ideological purity tests—and so far, it does—then new polling data reveals interesting contours to where the electorate sits on the most freighted public opinion and policy issues.

Abacus Data recently asked a broad range of questions designed to examine how polarized Canadian voters are and where exactly the fault lines can be found, and provided the results to Maclean’s. The pollster defined polarized Canadians as those who say they “hate” either Liberals or Conservatives and who dislike compromise or think of people who don’t vote like them as their enemies. Using those criteria, Abacus found that 26 per cent of the population are deeply entrenched in their political views, while 74 per cent are more open-minded.

The polarized group is nearly evenly split between the right and left sides of the Canadian political spectrum; 47 per cent are Conservative supporters, 21 per cent Liberals, 16 per cent NDP, eight per cent Green, four per cent Bloc Québécois, and four per cent support some other party. Andrew Scheer fares somewhat better than his opponent in the opinions of polarized voters, with 40 per cent having some degree of positive impression of him, compared to 37 per cent who think positively of Justin Trudeau.

Abacus found that nearly half (45 per cent) of Canadians feel “fearful and frustrated” about their own future prospects; that sentiment is much more common among polarized people, at 63 per cent. But even if there is some burn-it-all-down populist frustration bubbling in Canada, Donald Trump is profoundly unpopular across the board. Asked whether the U.S. president is doing “grave damage to America and the world,” 80 per cent of Canadians agree, including a sizable majority (76 per cent) of polarized voters.

Abortion is perceived as a deeply fraught policy area, but the vast majority of Canadians appear to consider it a settled issue; 85 per cent agree with the statement “Abortion is a choice that women must be able to make,” including 80 per cent of polarized voters and 87 per cent of non-polarized voters.

While 45 per cent of polarized voters agree that “Canada would be better off if it was more white,” that is not an unheard-of sentiment in the general population either: nearly one in four (22 per cent) overall agree. Similarly, a slight majority (52 per cent) of polarized voters believe that Canada would be better off if there were no Muslims in the country, along with 25 per cent of the population in general. Polarized voters are more likely to say the world is getting worse over time, that Indigenous people “have it easy and have too much power,” that climate change “is blown out of proportion by radicals” and that they are fed up with the promotion of women’s interests.

Abacus conducted the survey Dec. 13-18 online with 2,000 Canadian adults, weighted to match the population for age, gender, education and region.