One takeaway from the first debate: Canada's foreign policy is an unholy mess

The leaders' responses on China, Israel and Canada's role in NATO lurched from platitudinous to downright bizarre 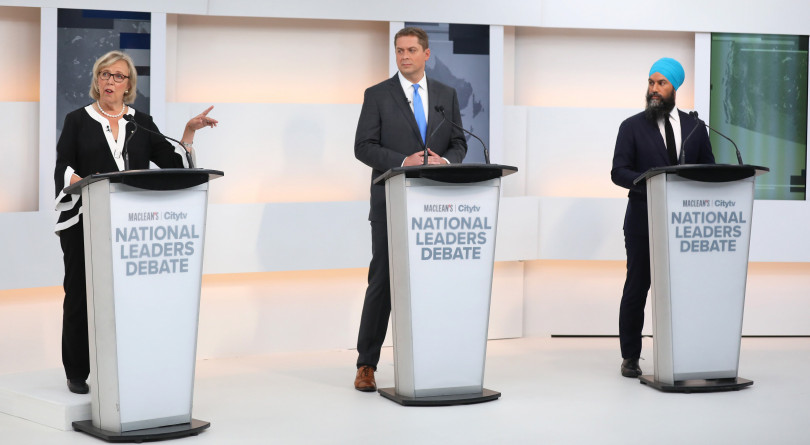 When Elizabeth May, Andrew Scheer and Jagmeet Singh got going on foreign policy, the results weren't pretty (Photograph by Cole Burston)

The great thing about Green Party leader Elizabeth May is that when she’s dealing with an issue she’s actually knows something about, she’s a wonder to behold. In Thursday evening’s Maclean’s—Citytv federal leaders’ debate, May proved herself to be a fierce and formidably well-informed champion of the cause of meeting Canada’s commitments to the greenhouse-gas emissions targets in the 2016 Paris Accord. Neither Conservative Party leader Andrew Scheer nor the New Democrats’ Jagmeet Singh could lay a glove on her. She cleaned their clocks.

But when the evening turned to the foreign policy portion of the debate, May went sideways. She wasn’t alone.

Scheer delivered a spotty and oddly mediocre presentation of his party’s otherwise easily defensible foreign policy platform, but he made little effort to contest what Singh and May had to say for themselves. After all, it’s not like the Conservatives are hoping to bleed away the leftish and eco-political blocs Singh and May are fighting over, so Scheer tended to look straight into the camera, delivering as many mini-speeches as he could get away with.

For his part, Singh persisted in the theme that ran through almost everything he had to say Thursday evening—the harm Liberal and Conservative policies inflict on working people—by criticizing conventional approaches to free trade that fail to address environmental standards and workers’ rights. He sounded a lot like Justin Trudeau in 2015 in that way. This might have prompted an amusing exchange with the incumbent Prime Minister, had Trudeau even bothered to show up, but of course he didn’t.

In any case, it was May that ended up making the most strenuous effort to rattle Scheer, and it was just weird. After Scheer concluded a quick and almost stream-of-consciousness dabbling into his party’s standpoint on a number of pressing questions—the Conservatives’ steadfast support of the resistance Ukraine has been putting up against Russia’s neo-imperialist aggression, and the Conservatives’ similarly steady support for Israel’s right to defend itself—May weighed in:

“So it’s not okay when Russia occupies Crimea, but it is okay for Israel to occupy Palestine?”

The subject immediately at hand was Scheer’s pledge to pull Canada’s financial contributions to the United Nations’ Relief Works Agency. The chronically controversial body administers the affairs of Palestinians in such a way that contributes to elements in the Middle East, Scheer said, “that foment and encourage antisemitism and terrorism.” May took issue with Scheer’s assertion. “No they run schools,” she said. “They’ve run schools, in permanent settlement refugee camps, for 70 years.”

But it’s one thing to say Israel has been illegitimately occupying the West Bank, for instance, in defiance of UN resolutions, and that this has been the case ever since the Israelis drove the Hashemite Kingdom of Jordan out of the territory in 1967, and it’s quite another to say, as Israel’s most determined enemies do, that Israel is occupying Palestine. That would make the State of Israel a wholly illegitimate entity.

The Middle East bits wrapped up with May insisting, “I stand absolutely four-square for Israel.” Just not Israeli Prime Minister Benjamin Netanyahu, who May called a threat to peace in the region. Netanyahu, who has lately called for Israel’s annexation of the Jordan Valley, may well lose next Tuesday’s Israeli elections, if the internal polling by Likud, Netanyahu’s party, is anything to go by. Peace in the Middle East is not the likeliest outcome should Netanyahu lose.

In any event, something even weirder happened when moderator Paul Wells, Maclean’s senior writer, sought to draw out some explanation from May about the Green Party’s aversion to the North Atlantic Treaty Organization (NATO).

May said she would want NATO to shift its focus to nuclear disarmament. Last month, both U.S. President Donald Trump and Russian strongman Vladimir Putin pulled out of the Intermediate-Range Nuclear Forces Treaty, an arms-control effort concluded by Ronald Reagan and Mikhail Gorbachev in 1987. May said she wouldn’t commit to supporting the Canadian troop contribution to NATO’s defence of the Baltic states, but she otherwise appeared to agree with Scheer that Canada’s military is underfunded. Then came this.

“We don’t have surveillance on our arctic shores. We don’t have anyone there to intercept Russian vessels that land, and they do land,” May said. “People do come ashore and we have absolutely no capacity to deal with that.”

Hold on. Russia has been landing soldiers on the shores of Canada’s arctic?

That one just slipped by, and Scheer was left to mutter and scoff as both Singh and May goaded him with taunts to the effect that as prime minister, he’d be little better than a lapdog to U.S. president Donald Trump. “If anyone wants to know where you stand, just figure out what Trump wants,” May said. “You want to do what Trump wants.” Singh gave his best to paint Scheer in the same colours, saying both Scheer and Trudeau have shown weakness in failing to “call out” Trump for his treatment of the hundreds of thousands of migrants and asylum seekers apprehended at the U.S.-Mexico border since Trump was elected in 2016.

“Stripping kids from the arms of their parents,” Singh said. “To not call that out for the shameful act that it is … Would you be willing to call out Mr. Trump?” Singh asked Scheer. “I don’t think so. You don’t have the courage to do so.”

RELATED: What Elizabeth May had to do at the debate was less than she did

But “calling out” bad behaviour doesn’t count as effective foreign policy. It certainly doesn’t work with Trump. It doesn’t work with China’s Xi Jinping, either. By far the single most alarming foreign policy challenge facing Canada and pretty well every other rule-of-law country on the planet is the dramatic rise of China as an outwardly belligerent police state. Beijing is determined to occupy all the spaces formerly held by the world’s liberal democracies in setting the entire agenda for global development, trade, and international relations.

Singh was given the first shot at addressing the China file. He barely addressed it at all beyond reiterating the cliché about striking a “balance” between trade and human rights.

May had the most to say, beginning with this sensible observation: “Anyone that gives an answer confidently saying they know what to do with China, isn’t telling the truth.” This might explain why she didn’t bother trying. She repeated another fashionable cliché about Canada merely being “caught in the middle” of a pugnacious Trump and an intractable Xi, and while she was candid enough to admit that China is “a totalitarian dictatorship,” there was also this: “Canada’s diplomatic relations with China have to deepen, have to show that we are serious about working with them.”

Scheer managed to get in some bits of the Conservative policy—withdrawing the Liberal government’s $250 million investment in the Beijing-sponsored Asian Infrastructure Bank, for instance—but failed to mention that the Conservatives have pledged to conduct a root-and-branch re-evaluation of Canada’s conventional approach to China, in favour of a pivot away to other Asian economies .This didn’t exactly instil confidence that Scheer will have the courage of his party’s professed convictions if he ends up Prime Minister next month.

One thing May, Scheer and Singh agreed on, which is also more or less Trudeau’s position, was that securing the release of Michael Kovrig and Michael Spavor must be Ottawa’s overriding focus. Kovrig and Spavor were arrested in an act of hostage-diplomacy shortly after last December’s detention in Vancouver of Meng Wanzhou, chief financial officer for Beijing’s “national champion” telecom Huawei, on a U.S. Justice Department extradition warrant. The warrant arises from a 13-count indictment involving bank fraud related to Huawei’s alleged sanctions-evading activity in Iran. Beijing has added to the pressure by enforcing an effective embargo on a range of Canadian agricultural products. The critical national-security question of whether Huawei should be allowed a place in Canada’s fifth-generation (5G) internet rollout next year wasn’t even discussed.

In a sign that the Canada-China diplomatic stalemate might be easing, Beijing’s foreign ministry has declared its happiness with the new ambassador Canada is sending to Beijing, following Trudeau’s dismissal of Liberal Party fixture John McCallum last January. McCallum was fired for persisting in his public expressions of hope for a political intervention in the judicial process Meng is facing, either by Trump intervening with the U.S. Justice Department, or by Trudeau intervening with Canada’s new attorney-general. The new ambassador, Dominic Barton, recently left his post as a senior partner with McKinsey and Company, a global consulting firm with deep ties to China’s complex of state-owned enterprises.

The whole thing is “a complete mess,” Singh said.

It would be hard to argue with that. It would be just as hard to argue against the proposition that all three leaders made a bit of a mess of the foreign-policy portion of Thursday evening’s debates, for different reasons, maybe, but a mess all the same.

The three leaders will have a more complete opportunity to argue with one another in a debate wholly given over to foreign policy on Oct. 1 at Roy Thompson Hall in Toronto. Trudeau intends to be a no-show at that one, too.