One, two, three strikes—federal leaders are out

Superstitious? The Toronto Blue Jays are 0-3 when federal leaders show up. 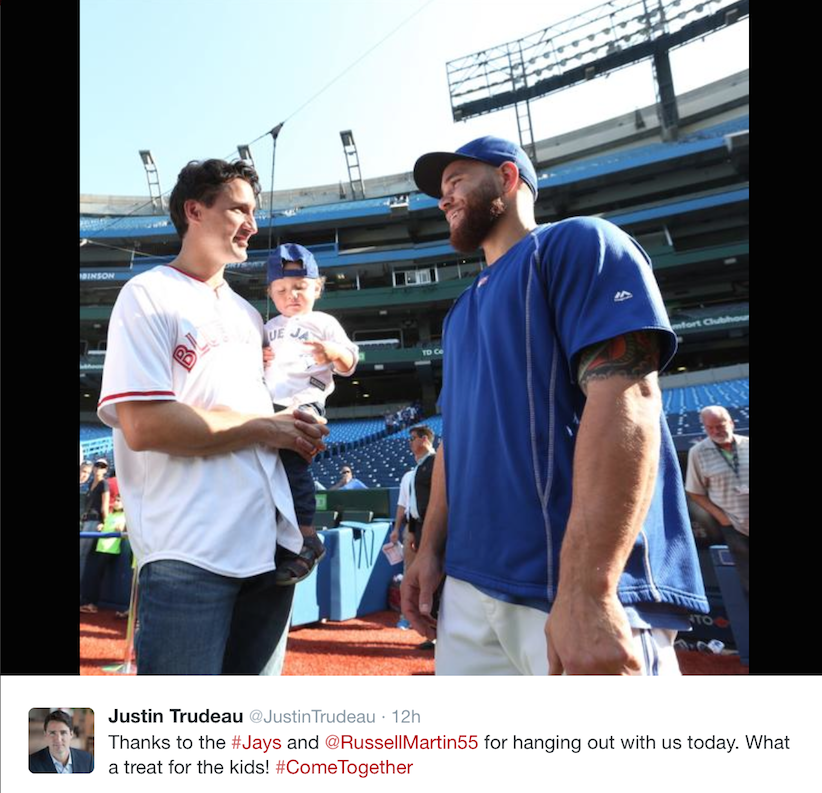 Baseball players and fans can be a little superstitious. Teammates never talk to their pitcher if he’s throwing a no-hitter. Fans put on their baseball caps inside out and backward—the beloved rally cap—to help their team get a few runs. And most important, under all circumstances: keep federal leaders away from the ballpark. The Rogers Centre has recently become a must-have tour stop for federal leader family photo-ops, as the red hot Toronto Blue Jays are on the verge of making the playoffs for the first time since 1993. But the moment Jays fans found out Liberal Leader Justin Trudeau was attending Friday night’s game, they were worried. NDP Leader Thomas Mulcair paid a visit mid-August in the midst of a Jays 11-game win streak, and they lost that night to their playoff rival New York Yankees. Two weeks later, Stephen Harper showed up to the ballpark with his family, which ended in another Jays loss. (But give him some credit for sticking it out for all nine innings.)

So Jays lose when Mulclair and Harper have been there. Your move Trudeau, this could make or break the election.

Jays lost when Mulcair was at game, lost when Harper was there tonight. If you want my vote, Trudeau, stay the hell away from Rogers Center!

Journalists warned Trudeau about the curse before the game, asking if he too was worried about his presence being bad luck. “I’m just really focused on the fact that I get to bring my kids to their first Major League Baseball today,” he replied. Trudeau went on to explain how his dad, the late Prime Minister Pierre Trudeau, took him to Montreal Expos games as a kid. He mentioned that his paternal grandfather was one of the founders of the Montreal Royals, a minor league pro team for which Jackie Robinson broke baseball’s colour barrier in 1946. “Baseball runs deep in my family and I’m looking forward to a great game tonight,” Trudeau said. “But I’m mostly looking forward to sharing it with my kids.” The answer was met widely with applause, but the federal-leader-Jays- curse started early. When the Liberals sent out a press release saying that Trudeau would attend the Jays’ batting practice, the accompanying photo was of the leader sitting down for a chat with Montreal Mayor Denis Coderre.

Later at the ballpark with his family, falling short of actually picking up the bat and taking a few swings himself, Trudeau had everything a politician could ask for in a pre-game photo op. He chatted in French with the Jays’ all-star catcher, Russell Martin, a Montreal native. Trudeau’s older son, Xavier, had his red Canada Day  Blue Jays cap signed by Martin, and Trudeau later played a little bit of catch with his young boy Hadrien.

Thanks to the #Jays and @RussellMartin55 for hanging out with us today. What a treat for the kids! #ComeTogether pic.twitter.com/VbHs0imoSh

The fans were happy to shake his hand, though from what Jays players know about Prime Minister Stephen Harper—which isn’t very much—they couldn’t be expected to know much about Trudeau. One Jays coach, amid all of the hubbub of the Liberal leader’s photos, could be overheard asking a journalist if Trudeau was a hockey player. (NHL star Shea Weber was in attendance at batting practice too, which might explain the mixup.) After batting practice, Trudeau crossed the street to pour a few pints of beer for Jays fans at the Duke of York bar, but got back to the ballpark in time for the national anthems. His family found their seats in the 100-level outfield and a lineup of photo seekers quickly formed. But then the game started, and the home team was struggling. When the Jays were trailing the Baltimore Orioles 2-0 early on, fans on social media were begging Trudeau to leave the ballpark.

The political jinx is real someone tell Trudeau to leave the ball park! @BlueJays @KeriFerg

Trudeau complied, leaving after four innings and the Jays down 2-1, not because of Twitter anger, but rather his young boys were exhausted after a long day. His absence did not remedy the situation, however. The Jays lost 10-2. It was the team’s first loss by eight runs or more since April 24. As for Russell Martin, the Jays catcher and also the star player whose name was on the back of Trudeau’s jersey that night, he grounded into two very untimely double plays.

Jays losing w/Trudeau attending, as they did when Mulcair & Harper did. The federal leader’s curse is the only thing that can stop them.

After the game, John Gibbons was told that his Jays are now 0-3 with federal leaders in attendance. The coach had two words for them in response: “Stay away.” He repeated it once more. “Stay away.” Gibbons is likely to get his wish.

Don’t worry, fellow #BlueJays fans. @JustinTrudeau, @pmharper and I have a busy September and October lined up. #ComeTogether —TM