Mark Cameron and Michael Bernstein: As Ontario takes the feds to court over a price on carbon, a new poll says Ontarians support the federal measure—especially when they learn about an annual rebate 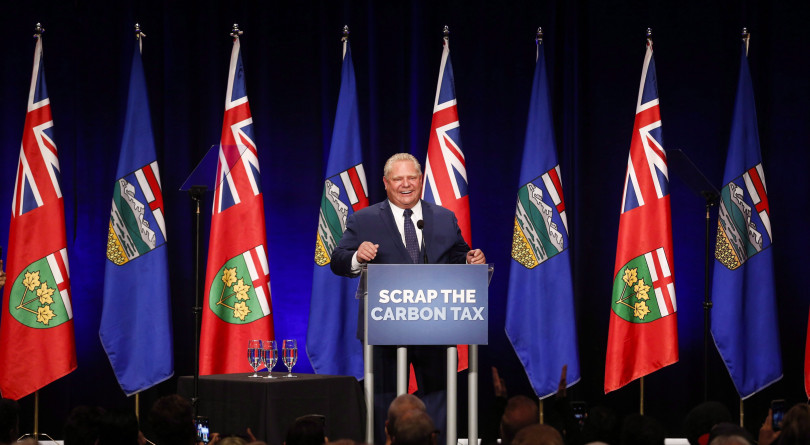 Mark Cameron is executive director and Michael Bernstein is senior vice-president of Canadians for Clean Prosperity.

The Ontario government has been slow to say exactly what it is for when it comes to tackling climate change, but it has been clear about what it is against: the federal government’s carbon price backstop, which came into effect on April 1. From Premier Doug Ford’s warnings–dismissed by economists–that a modest increase in the price of gasoline and natural gas could lead to a “carbon tax recession,” to photo ops of cabinet ministers fuelling up at gas pumps before the federal carbon price came in, to the announcement that they are preparing a multi-million dollar television ad campaign against the federal carbon tax, Ontario has stepped up its fight against the federal climate change strategy while giving only a bare outline of their alternative plan.

Today, Ontario begins the next stage in its opposition to the federal carbon price as it argues in the Ontario Court of Appeal that the federal measure is unconstitutional. The vast majority of legal scholars disagree, with most holding that the federal government has clear authority to bring in a carbon price either as an environmental regulatory measure or simply as a direct tax. The province has said it will spend up to $30 million fighting the feds in court in what is likely a futile challenge.

Over the next few weeks, millions more in taxpayer money will be spent telling Ontarians the federal carbon tax will take “a lot of nickels” out of their pockets. But Doug Ford’s team neglects to mention that most Ontarians will get even more nickels back through the federal carbon tax rebate that will return $307 to the average Ontario household.

In fact, eight in 10 Ontario households will get more back in carbon rebates than they pay in carbon taxes.  Perhaps that’s why most Ontarians oppose Premier Ford spending taxpayer money to take away these rebates.  Canadians for Clean Prosperity, a not-for-profit organization that supports revenue neutral carbon pricing, commissioned the Loewen Lab at the University of Toronto to conduct a poll of Ontarians on this subject. We found that only 27 per cent of Ontarians support the provincial government’s court challenge of carbon pricing, while 48 per cent are opposed.

We also asked Ontarians about Premier Ford’s plan to spend tax dollars on an advertising campaign against the federal carbon price. In opposition, the Progressive Conservatives criticized Kathleen Wynne for removing the auditor general’s authority to block partisan advertising. But now, they are preparing to launch blatantly partisan ads of their own, reminiscent of negative advertising during an election campaign. Ontarians, by a wide margin, are against this—in our poll, we found that 65 per cent oppose the provincial advertising campaign, while only 20 per cent are in favour. Even many of those who oppose carbon pricing or who support the Progressive Conservatives provincially are nonetheless opposed to spending money on these kinds of negative ads.

Ontarians also seem skeptical of Ontario’s court challenge. Respondents were evenly split as to which level of government should have primary responsibility for dealing with climate change and carbon emissions. Fifty-two per cent say the provinces should take the lead, while 48 per cent see it as a federal role. However, by a 50 per cent to 32 per cent margin, Ontarians think the federal government is right to step in and impose its own carbon price in provinces (like Ontario, New Brunswick, Manitoba and Saskatchewan) that do not bring in a carbon pricing plan of their own. So not only does the Ontario government’s argument before the Court of Appeal look weak in the eyes of constitutional experts, but it looks like a losing argument in the court of public opinion as well.

The bottom line is that when they learn the facts, Ontarians support carbon pricing, despite the Ford government’s protestations. And they’re certainly opposed to the provincial government spending taxpayers’ dollars to attack carbon pricing—whether those attacks come in the form of legal briefs before the courts or as campaign-style negative ads during a Leafs playoff game.

Methodology: The survey was conducted by Loewen Lab at the University of Toronto. The survey sampled 1,025 respondents in Ontario. Respondents were provided by Qualtrics and the survey was hosted on the Qualtrics platform. Sample was drawn with quotas for age and gender. The data are further weighted with iterative proportional fitting on census data for age, gender, homeownership, and immigration status. The margin of error for a comparable probability-based random sample of the same size is +/- 3%. Totals may not add up to 100 due to rounding.