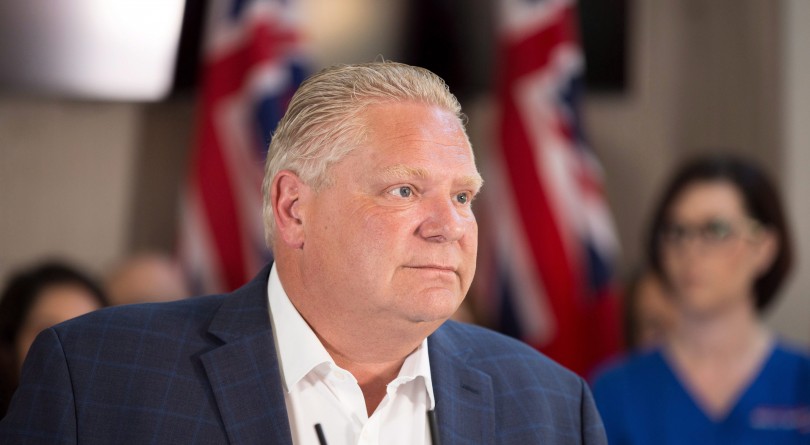 If you’re a Progressive Conservative who’s not down with the populist flatulence now emanating from Doug Ford, you’re probably still delighted not to be stuck with Patrick Brown, lest you be buried under the former PC leader’s ever-increasing pile of manure.

A deeply-sourced investigation published this weekend into candidate nominations in the Brown era revealed about as much dirt as you’d expect to find in a sandbox free of public scrutiny. It’s a filthy little tale full of fraudulent memberships, roving bands of rent-a-crowds, and a stuffed ballot box. The episode isn’t a gold star for politics, and if you think there’s only one party that operates in this manner, well, Captain Renault, you’d better reach now for the smelling salts.

But the documented misdeeds are — for now — exclusive to the Tory side. It’s the kind of grenade that wounds a campaign, which is why Team Ford picked it up and lobbed it — with some urgency — over the wall and onto Patrick Brown’s political corpse, where it joins alleged sexual misconduct and confirmed house-financing shenanigans (involving Jass Johal, recipient of one of the fiddled nominations) on the list of ‘What killed Patrick Brown’s career?’ trivia questions.

Get the Maclean’s Politics Insider newsletter: Sign up here >>

“Anything that happened under the previous leader is in the past and our party is moving forward,” offered a hoping-to-move-forward Melissa Lantsman, spokeswoman for the Ford campaign. And while it’s true the party under Ford’s leadership overturned some of the bent Brown nominations, others were left to stand, including that of Simmer Sandhu, who last week played a starring role in the election for resigning following the revelation that a treasure trove of motorist data has gone missing from his former employer.

A floundering Kathleen Wynne grabbed the Simmer disclosure like a ninth life, portraying the toll-road data as a unfair guarantor of Tory victory, stopping just short of asking Ford to jail himself and concede the election. “Those who aspire to lead our province have an obligation to put the integrity of our electoral process ahead of partisan gain, political ambition or, indeed, any other consideration,” Wynne said in a statement. David Livingston and Andrew Oliver, meanwhile, couldn’t be reached for comment on the subject of Wynne’s new high horse.

A testy Ford did his best to parry the blow. “We heard of one candidate,” the PC leader said, referring to the data linked to Sandhu. “As you know, I acted immediately. If there’s any other issues, I can assure you I’ll deal with it immediately.”

Various Liberals then magically started popping up with tales of unsolicited contacts from the PC team, hoping to give Ford things to deal with immediately. Deb Matthews, the Liberal campaign co-chair, even claimed to have received a text from the PC’s on her mobile despite having never shared the number. When challenged to produce the offending message, however, Matthews couldn’t, reaching into her handbag to instead produce a remote control, which she then pointed at reporters while clicking furiously.

Even with Liberal overreach, the Simmer story will continue to, um, simmer for awhile. It’s the kind of story that (rightly) titillates the press, even if it is all a bit hard for the casual observer to score. Ford might not have directed Sandhu’s action, or even know the full extent of the problem he might be facing, but he’s the man with whom the buck now stops, which is why he’ll have to act precipitously to cauterize the wound and expel candidates should any prove to have dabbled in the missing data.

The whole unappetizing mess could be why a new poll now shows a tightening race: PC 35, NDP 34, LIB 24. Andrea Horwath’s voluminous candour is proving increasingly attractive to change voters not satisfied with Doug Ford’s soundbite-sized version of the same.

And while the NDP might no longer be associated in voters’ minds with ‘Rae Days’ or Olympian levels of spending, Horwath can’t have been pleased this weekend to see her own platform figures debunked by a smooth $1.4 billion. In a sign she’s getting the hang of partisan politics, Horwath subsequently threw former Parliamentary Budget Officer Kevin Page under the bus for not catching her mistake when he reviewed the NDP’s figures.

Nor can Horwath afford to relax; the increased scrutiny is a sign of Dipper success, and won’t be stopping any time soon, as candidate Laura Kaminker can attest. Kaminker — a refugee who fled north to escape the wretched tyranny of George W. Bush’s America — spent the long weekend revisiting her past comments bemoaning the “collective brainwashing” symbolized by Remembrance Day poppies. Horwath’s response to her candidate’s marginal banter was a commendable ‘yay, free speech’, but we’ll see how long that principled approach lasts as more of her team slide under the media’s microscope.

As for Ford, the PC leader can only hope his double-barreled “for the people” messages of less gas tax and more booze is enough to get him back on the front foot. The more time Ford spends explaining away data breaches and Brown’s diseased candidate selection process, the less time he spends selling himself as the cure to what ails Ontario.