Ontario's experiment with vote-counting machines could change elections to come

The Tories raised concerns, but you can expect electronic tabulators to be fixtures in future votes throughout the country 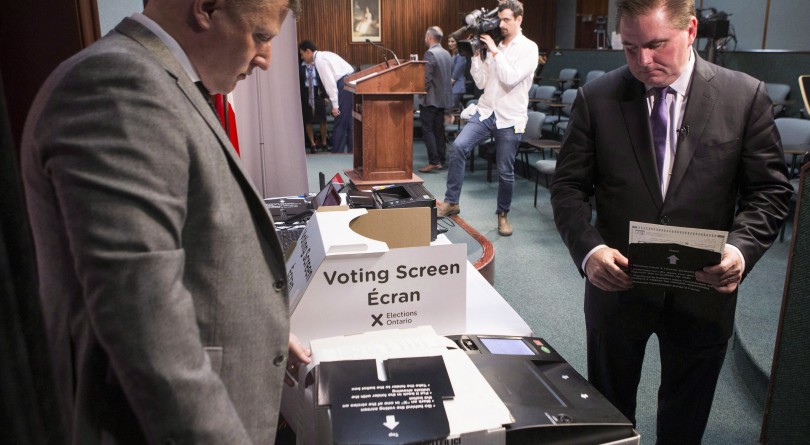 Ontario's Chief Electoral Officer Greg Essensa (right) takes a ballot to a vote tabulator as he demonstrate an electronic voting machine during a media availability in Toronto on Wednesday May 9 , 2018. THE CANADIAN PRESS/Chris Young

If you’re an Ontarian who voted in Thursday’s provincial election, there’s a chance you cast your ballot into a tabulation machine, rather than a cardboard box.

It’s the first general election that Elections Ontario has made use of vote tabulators, though you might have already seen them used in municipal elections. They’ve been deployed at 50 per cent of polling stations, while the rest of the votes are being manually counted.

Elections Ontario says it hopes the change will result in votes getting counted faster while allowing it to rely on fewer workers. According to its 2015­–16 annual report, returning officers faced difficulty filling the large number of polling staff positions required to manually count the votes. In the 2014 election, 76,000 polling staff were hired, and with the increase in the number of ridings for this election cycle, Election Ontario say they would’ve had to hire 100,000 polling officials. The machines cut down the number by half.

The total price tag of these machines is $13.4 million, but Elections Ontario expects to save $5.3 million in staffing costs, and the machines can be shared with municipalities for local elections.

Vote tabulators were first piloted in the 2016 Whitby—Oshawa byelection, which was called after the resignation of PC MPP Christine Elliott. Elections Ontario reported that the time it took to count the ballots was reduced from 90 minutes to less than 30.

The machines are manufactured by Dominion Voting Systems, a Toronto based company, and are not connected to the Internet. In the event that there are any issues with the count, Elections Ontario staff retrieve the paper ballots from the machines and count them manually.

That hasn’t stopped the PCs from expressing worries about the machines. CBC reported that the party accused Elections Ontario of providing inadequate information about the machines and raised concerns over protections from hacking and vote certification. Neither the NDP nor the Liberals flagged any concerns, and the Liberals called the concerns from the PCs a “red herring.”

RELATED: The 5 moments that defined the 2018 Ontario election campaign

The first province to use vote tabulators for a provincial election was New Brunswick in 2014—machines that were also sourced from Dominion Voting Systems. Due to a technical glitch, the results were delayed by hours, though Elections New Brunswick officials attributed the snafu to a software problem and said the machines themselves were not at fault.

There have already been anecdotes of problems at the polls in Ontario. Some voters have reported long lines due to issues with the vote tabulators. According to Elections Ontario, 99.6 per cent of the machines are working properly.

.@ElectionsON …so trying to vote. No one can get the ballot machine to work at #sprucecourt in #cabbagatown. I’m going to have to leave and my vote will not be counted. Why is my vote being suppressed through incompetence?

How quickly tabulators will become the industry standard remains unclear—Elections Canada is not yet considering using the machines, even though it filled only 285,000 of 329,000 in the last federal election. Still, the advance of technology appears inexorable: a spokesman for the federal agency said it does plan to implement so-called “e-poll books” at some advance polling places to automate routine tasks like checking names off of the voters’ list and completing registration forms.

CORRECTION: The original version of this story incorrectly stated that Elections Canada is looking into using tabulation machines for federal elections. While the agency plans to implement e-poll books at some advance polling sites, it says the marking and counting of ballots will not change.