O’Toole’s master plan, an ‘exceedingly dangerous’ situation in Afghanistan, and a PM-Ford truce 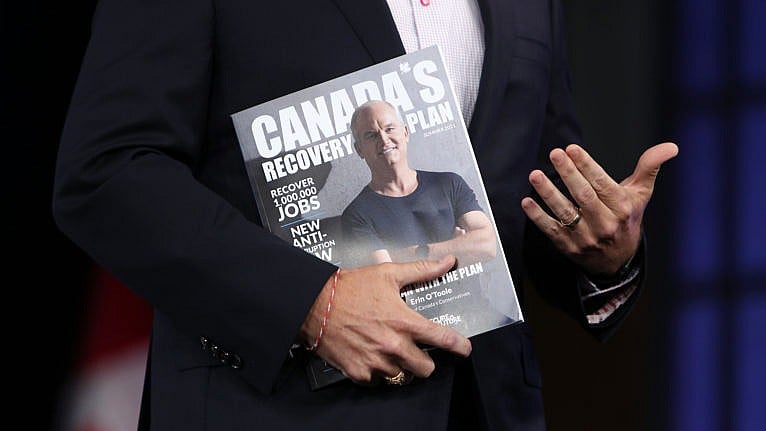 On the first full day of the federal election of 2021, events in Kabul pushed election news out of the way. The suddenly victorious Taliban blocked access to the Kabul airport as countries who fought the Muslim fundamentalists for two decades scrambled to get local staff and their families onto planes and out of the country. The Canadian government faces difficult questions about the fate of interpreters and others who served the Canadian armed Forces, the Globe reports.

On the campaign trail in Montreal, Justin Trudeau, who has not paused his campaign to deal with the matter, told reporters that Canada is working with allies to try to get people out of an “exceedingly dangerous” situation, the Globe reports, but a CAF Globemaster in Kuwait must wait for approval of U.S. commanders. Trudeau said at least 807 Afghans have been evacuated and 500 have arrived in Canada. Special forces soldiers remain in Afghanistan.

Retired Canadian major general David Fraser, who once commanded more than 2,000 NATO coalition troops in Afghanistan, estimates there are still about 800 Afghans of interest to Canada who are stuck there. He said these are former Afghan helpers and translators, drivers and cooks who worked for Canada as well as their family … Fraser said he suspects the Canadian government is asking the United States government to ferry more Afghans out on behalf of Canada … “The United States seems to be the only country in the world with the resources and the will to get people out. God bless them for doing that.”

Former Globe correspondent Graeme Smith has a thoughtful column on how Afghans are bracing for the new era.

O’Toole’s plan: On the campaign trail in Ottawa, Erin O’Toole released an ambitious 160-page election platform, promising to create a million jobs, increase health funding and take money the Liberals have earmarked for child care and give it directly to parents, CBC reports.

Unlike past Conservative platforms, this one embraces a robust role for government in the economy through large cash injections to help businesses weather the pandemic crisis over the next two years. The multi-billion dollar plan has not yet been costed; the party says the Parliamentary Budget Officer has not finished studying the numbers. O’Toole said a Conservative government would balance the budget in ten years’ time. The federal deficit for this fiscal year alone is expected to be $381.6 billion. “You’ll probably notice ideas that you haven’t heard from Conservatives like me before. It’s time for Conservatives to take inequality seriously, because that’s becoming more of a problem in our country,” … O’Toole says in the opening paragraphs of the document.

In Maclean’s, Paul Wells, who has had a look at the large, detailed document, seems impressed by the effort that went into this.

Canada’s Recovery Plan (rejected title: Erin O’Toole’s Hail Mary Pass) is an attempt to answer every question anyone will ever have about O’Toole and his party. Surely a doomed attempt—it’s always easy to come up with more questions, this week often featuring the words “nasal swabs”—but ambitious in the trying nonetheless.

Also in Maclean’s, your correspondent has a column on how the right wing of O’Toole’s party may make it hard for him to run his campaign.

These internal divisions are making it hard for O’Toole to stake out defensible turf. In his first media availability after the writ drop on Sunday, he tried and failed to dodge questions about vaccine mandates. He likely is not able to support them without his MPs rebelling, so he is jammed, stuck opposing a popular policy, which the Liberals will be delighted to discuss whenever anyone asks them about anything even vaguely pandemical. Liberals can likely use that to pivot away from the most difficult question for them: Why are we having an election at all? The honest answer, which Justin Trudeau must under no circumstances give, is that he wants a majority and thinks he can get one, while everyone is still feeling good about having been vaccinated.

In the Sun, Brian Lilley has a different take on mandatory vaccines for civil servants as an election issue. He has unearthed a letter that suggests the two leaders’ positions aren’t actually different.

Still, there is a difference between parties in one way: Not all CPC candidates are vaccinated, unlike the NDP and Liberals, according to David Akin on Twitter.

In any case, the federal government does not seem to be about to force anyone to get vaccinated any time soon, least of all election workers, as the Global story shows.

OPC-LPC truce: The Star’s Robert Benzie has a scoop: Trudeau and Ford have reached a truce for the duration of the campaign.

Bloc target: In Quebec City, Yves-François Blanchet said the Bloc Quebecois hopes to win 40 seats in the election, up from the 32 he won in the 2019 election, Le Journal de Montréal reports.

NS squeaker: As Nova Scotians head to the polls today, two polls show the race tightening, which means Iain Rankin has lost a lot of ground. Since Rankin campaigned on a vaccine passport while Tim Houston’s Progressive Conservatives declined to take a position, the result may have lessons for the federal politicians.