338Canada: The very long odds for the PPC

Philippe J. Fournier: The debate commission ruled Bernier's party has a legitimate shot at winning more than one seat. The 338Canada model suggests not. 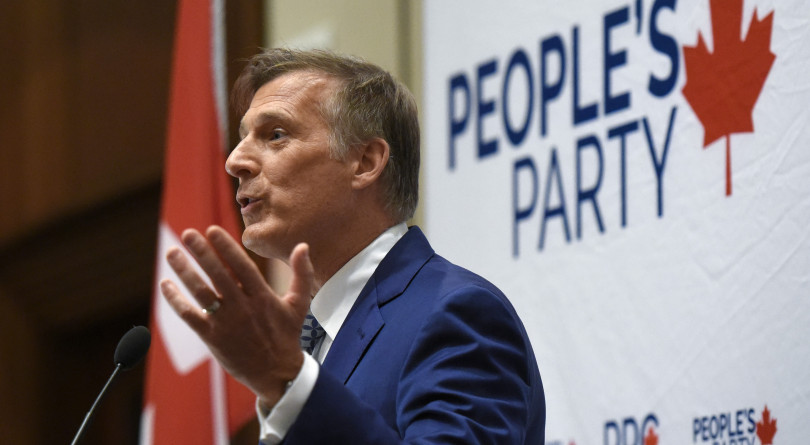 Bernier delivers an address at the PPC National Conference in Gatineau, Que. on Aug. 18, 2019 (THE CANADIAN PRESS/Justin Tang)

Does a candidate from a small party polling at 10 to 15 per cent in a riding where both the Liberals and Conservatives are most likely polling at above 35 per cent each really have a reasonable chance to win?

Apparently so, according to the Leaders’ Debate Commission and the experts it consulted in the past few weeks.

In the Leaders’ Debates Commission decision that was made public yesterday, it was revealed that Maxime Bernier, MP for Beauce and leader of the People’s Party of Canada, would be invited to attend the commission’s leaders debates in early October after all. Back in August, the Commission had stated that Bernier’s party did not meet at least two of three criteria set out by the commission. Those are:

The PPC does not meet the first criterion, as Maxime Bernier was elected in Beauce as a Conservative Party candidate. It does meet the second criterion, as it appears the PPC will run a full slate of candidates for the coming election. The matter was to determine whether Bernier’s party met the second half of the third criterion: “that candidates endorsed by the party have legitimate chance to be elected in the general election.”

In full transparency: The Commission contacted 338Canada in August and asked this very question. My answer at the time, according to the data that was available then, was no: the PPC did not have a reasonable chance to elect another candidate other than Bernier. This answer was based on several local and national polls that had been conducted and published then, as well as by-election results since the PPC’s creation.

In its appeal to the Commission, the PPC sent a list of four electoral districts for the Commission to poll. In the Commission’s final report, debates commissioner David Johnston writes: “I tasked EKOS Research Associates with conducting polling in the other four ridings identified by the PPC in its August 23 letter. The survey instrument asked respondents in each of the four ridings “how likely are you to vote for [name of candidate], the People’s Party of Canada candidate in your riding in the next federal election?””

Here are the districts and the polls’ results:

According to currently available data, both Nipissing–Temiskaming and Etobicoke North are labelled as “Safe LPC” by the 338Canada model. In the three provincial elections covered by the model, “Safe” districts have been correctly called in 98 per cent of the time (161/165).

Pickering–Uxbridge is currently set as “Likely LPC”. Since the model’s official launch in 2017, “Likely” districts have been correctly called in 94 per cent of cases.

In all three districts above, the main challenger to the Liberals is the Conservative candidate. The PPC is projected at best in third or even fourth place.

As for Charleswood–St. James–Assiniboia–Headingley, the 338Canada projection is currently set as a “Toss up” between the Liberals and Conservatives. PPC candidate Steven Fletcher is projected as a distant third.

According to a recent poll by Mainstreet Research for iPolitics, Fletcher’s support was measured at only 9 per cent among voter in the district, as opposed to 35 per cent apiece for the Conservative and Liberal candidates.

Is inviting Maxime Bernier to the debates the correct decision by David Johnston? This is not my call to make, but the numbers presented above show that the PPC is facing extremely long odds to elect more than one MP this October—especially since even Bernier’s re-election in Beauce is far from certain.

It goes to show how the term “reasonable chances” can be interpreted differently.