Philippe J. Fournier: The latest 338 projection shows the Liberals falling two seats per day since the campaign began. The Conservatives are the new favourites. 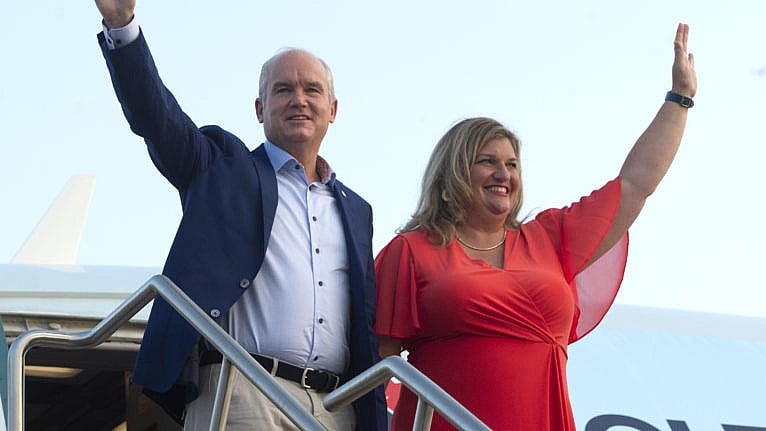 O'Toole and his wife, Rebecca, board their campaign plane for a flight to Hamilton, Ont. on Aug. 25, 2021 in Ottawa (Ryan Remiorz/CP)

It was (another) difficult week for Justin Trudeau’s Liberals in public opinion polls. The trends we observed in the first week of this short campaign continued and even intensified in the second week. With support for the Liberals in a downward spiral in key regions of Canada, several polls now show the Conservatives have taken the lead in voting intentions in the country. In the latest seat projections, Conservatives and Liberals may now stand neck-in-neck, but the all-important “momentum” of this campaign is clearly on the side of Erin O’Toole’s team.

Let’s take a look back at the polls of the past week:

Here are the 338Canada updated vote projections. We note that the Conservative Party has taken the lead for the first time since the start of the pandemic. However, the current gap between the CPC and the Liberals remains inferior to the projection’s uncertainty, therefore we must still call this a statistical tie between the two parties: Nonetheless, even though it technically is a statistical tie, one party is in decline since the writ has dropped on Aug. 15, and the other has been gaining ground since day one of the campaign. Here are the vote projections since the beginning of August. While the NDP and BQ have remained generally stable, the lines at the top are clearly moving in opposite directions: Seat-wise, the Liberals have fallen to an average of 140 seats from coast to coast, and the Conservatives have caught up to them: While the seat projections of the Liberal Party and the Conservative Party overlap around the same values, it is worth noting that in my column published two weeks ago, the Liberals stood at an average of 166 seats. The Liberals have therefore fallen by an average of two seats per day since the campaign began, and we do not know yet whether that slide has stabilized.

The most significant movement in vote intentions comes from Ontario. When the campaign began, the Liberals held an average lead of 10 points over the Conservatives. Both parties are now tied in the province, and the seat projections in Ontario have moved accordingly: We also should not dismiss the CPC surge in British Columbia in the past two weeks. Even though regional sample sizes in federal polls are smaller for B.C. than Ontario and Quebec (and therefore should be used with caution), we nevertheless observed significant movement in favour of the Conservatives at the expense of the Liberals in the province. Whereas the Liberal Party appeared on its way to make gains in B.C. merely two weeks ago, it now appears it will have to fight for many of the seats it won in 2019: In Quebec, we have not yet observed any notable movement in voting intentions since the campaign was launched. In fact, with the exception of the Bloc’s modest decline, voting intentions in the province remain essentially stuck to the results of the 2019 election. Nevertheless, if the Bloc does indeed stand below the 30 per cent mark, this would most likely benefit the Liberals, and could potentially translate into additional Liberal Quebec seats. The first French debate on the TVA (Québécor) network will occur this Thursday (Sept. 2), so we will watch the numbers in Quebec closely this week.

Against all expectations just last month, the Conservatives should now be perceived as the favourites to win the most seats in Canada. Granted, today’s update puts the Liberals and the CPC in a statistical tie, but one party is in free fall while the other has been on the rise. The question is therefore: Will the CPC be able to maintain this momentum in public support until election day?

In 2015 and 2019, Justin Trudeau had his best campaign performances as the underdog in the race. Will he manage to repeat this feat, or will the 2021 campaign become “the one campaign too many” for Trudeau? What at first appeared to be a boring federal campaign has become anything but.