Philippe J. Fournier: The latest data presents a challenge for the party—does it want a leader with socially conservative views or does it want to win? 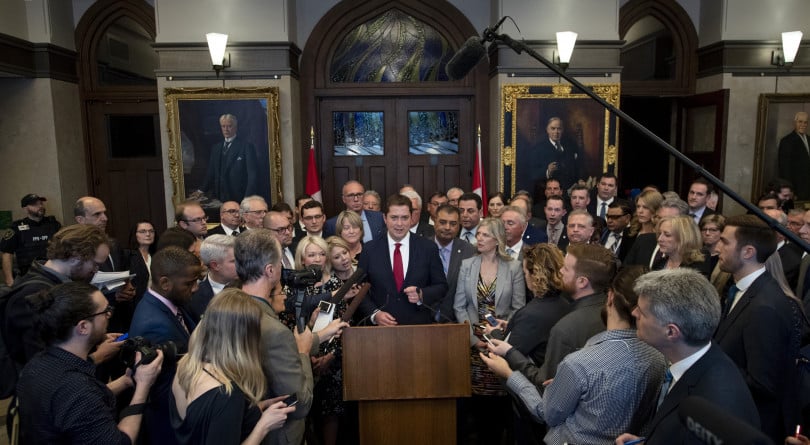 Andrew Scheer stands with his caucus behind him in the foyer of the House of Commons on March 19, 2019 (THE CANADIAN PRESS/Justin Tang)

When former federal Progressive Conservative leader Joe Clark candidly said that “I would prefer to go with the devil we know” in 2004 when asked about who he would support between Paul Martin’s Liberals and Stephen Harper’s newly merged Conservative Party, we knew some lines had been drawn in the sand for many former PCs. After the Alliance-PC merger, two other MPs had chosen not to join the CPC caucus, Scott Brisson had already crossed the floor to the Liberals, and it was clear that several Red Tories were not necessarily comfortable with what was considered by some as an Alliance/Reform takeover.

Nevertheless, Stephen Harper ended the Chrétien/Martin era in 2006 and the CPC formed government for nearly a decade, during which many of those Red Tories took a backseat. Now with the resignation of Andrew Scheer as Conservative leader in mid-December, CPC members may have some harrowing soul-searching to do before electing their next leader next June in Toronto.

A Léger poll published earlier this week shows that close to half of Canadians currently have no clue who the next Conservative leader should be. On the question “Which of the following public figures would make the best leader of the Conservative Party of Canada?” 51 per cent (among the poll’s 1,554 respondents) did not know who to pick from a large pool of potential candidates.

Former interim CPC leader Rona Ambrose lead the way with 10 per cent, followed closely by former Prime Minister Stephen Harper with 9 per cent. So far, no surprises. But the next three from the top five were somewhat more puzzling: Peter MacKay at 7 per cent, Jean Charest with 5 per cent, and Toronto Mayor John Tory at 4 per cent. 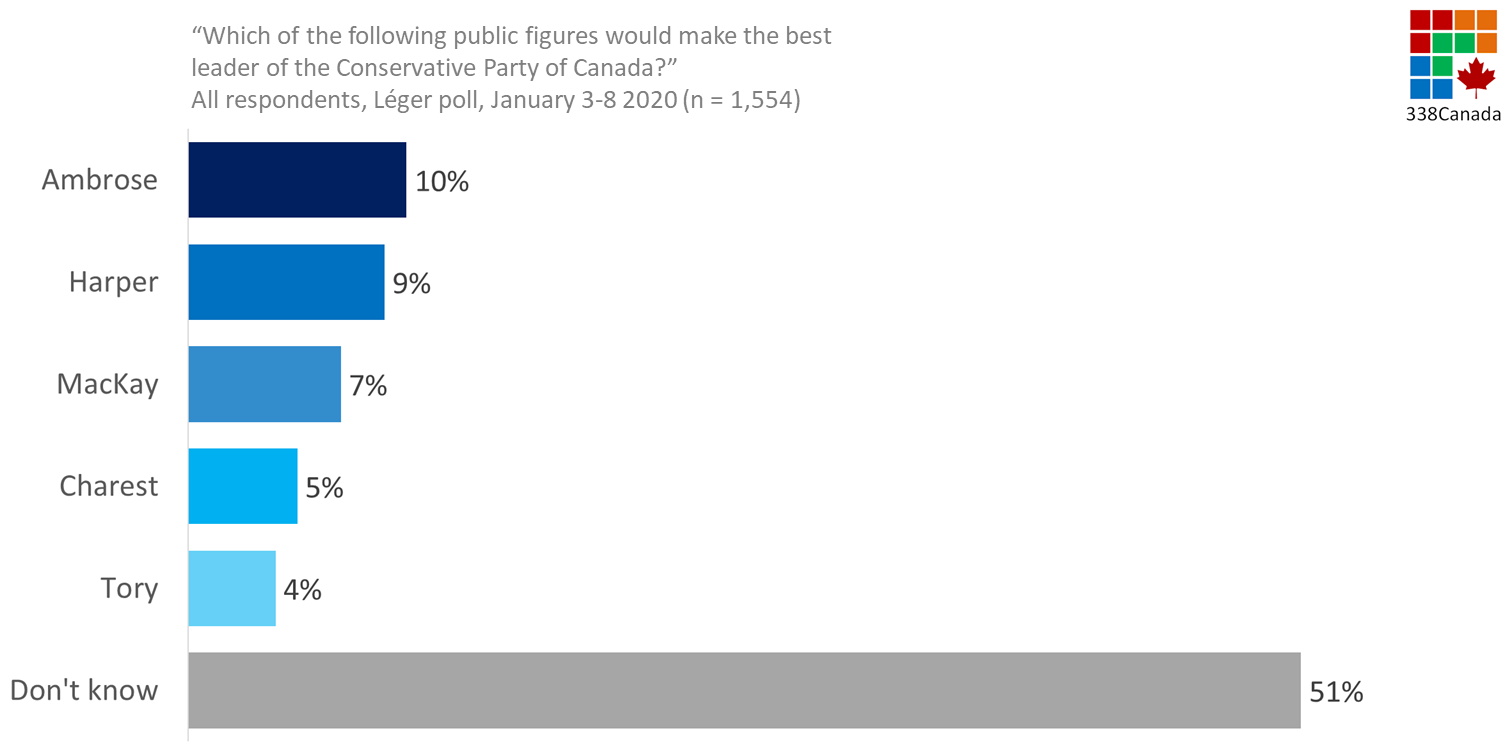 Rona Ambrose has yet to confirm her candidacy. A Harper comeback appears highly unlikely. And the remaining three names could all be considered from the progressive side of the Conservative spectrum—true Red Tories. (Those claiming that Charest was a ‘Liberal’ Premier in Quebec should look back at the political context of 1998: When Charest quit the federal Tories to take over the QLP in time for the 1998 Quebec election, Charest was considered more of a federalist leader facing off against Lucien Bouchard’s PQ, rather than a champion of QLP values. During his premiership from 2003 to 2012, Charest effectively lead the QLP from the centre-right of the Quebec political spectrum).

Contrast these numbers from those taken among the poll’s Conservative supporters (n = 392), where Ambrose and Harper stand out from the field with 18 per cent apiece: 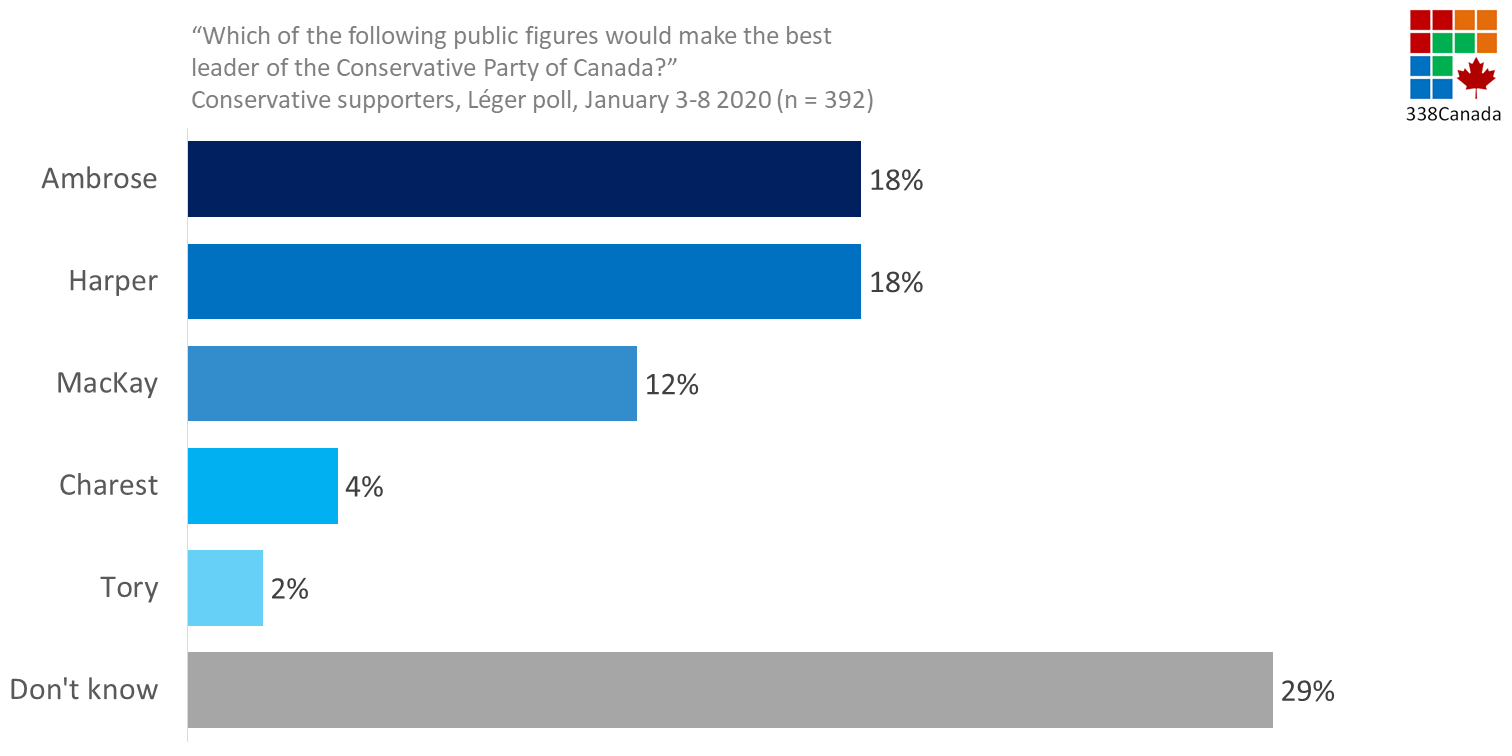 Current Alberta Premier Jason Kenney and Carleton MP Pierre Poilievre both fared better among CPC supporters with 6 and 4 per cent respectively. However, their poor results overall could be cause for concern for these numbers suggest that neither, although popular among Conservatives, would be likely to widen the CPC voter pool.

Perhaps unsurprisingly, the regional breakdown of the poll shows the “favourite son” theory to be in full effect. According to Léger, Rona Ambrose leads in western Canada (except in Alberta where she falls second to Stephen Harper), Charest leads in Quebec and Mackay is first in Atlantic Canada (Naturally, we must use caution with regional sub-samples because of their higher uncertainty).

However, we must keep in mind that the current rules for electing CPC leaders state that each electoral district weighs equally in the balance: CPC members from Bow River, Alta., get the same number of points as those from Toronto Centre, regardless how many CPC members live in either riding. Therefore, a strong candidacy from Central Canada could win the leadership race despite not winning the party’s popular vote (a scenario that should be familiar to conservative voters…).

How likely is it then that the next CPC leader come from the party’s progressive wing? Should Rona Ambrose decide not to run, these early numbers suggest the odds appear currently quite favourable. Case in point: The Léger poll asked respondents on the preferred characteristics for the next leader of the Conservative Party. Among the top answers were: Having political experience (62 per cent), maintain balanced budgets and avoid deficits (60 per cent), and, perhaps more surprising, that the leader be pro-choice regarding abortion (60 per cent). Also, a majority of respondents (53 per cent) believe the CPC leader should be in favour of same-sex marriage.

All in all, this data suggests that it may be incredibly risky for CPC members to nominate another social conservative as leader of the party.

This probably won’t stop social conservatives from trying to pull the party their way however. On Saturday, Le Devoir‘s Marie Vastel wrote that Richard Décarie, a former Harper advisor and notorious Quebec social conservative, is mulling over his own candidacy to block Charest or MacKay from taking over. He warns that: “With the return of the liberal Jean Charest, or even Peter MacKay, we could become a progressive conservative party.” Décarie promises to restrict access to abortion and redefine marriage as to exclude same-sex couples (who would only have access to “civil unions”), and adds that there is no scientific consensus on whether climate change is caused by human activity (note: there is, and overwhelmingly so).

During the last federal campaign, the most effective attacks against Conservatives from both the Liberals and the Bloc were directed at Andrew Scheer’s social conservative views. Within the first minutes of the TVA debate, Scheer been already been cornered by Blanchet and Trudeau on the question of abortion rights. In the days that followed, polling showed the CPC had gone from second place in Quebec to a distant third behind the Bloc and Liberals. Without stronger numbers in Quebec and Ontario, it was near-impossible for the CPC to win the most seats.

We will follow the numbers of the CPC leadership race closely in the following months.