Philippe J. Fournier: A new Abacus survey points to growing pessimism with the government. It is not a reassuring sign for Justin Trudeau and his team. 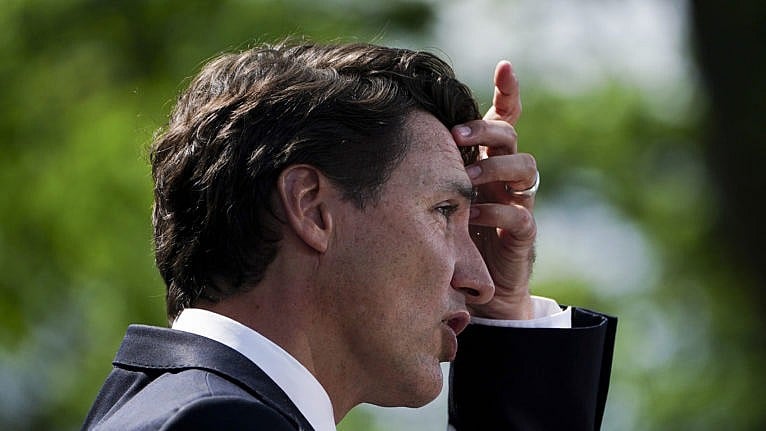 Trudeau holds a press conference after meeting with Governor General Mary Simon and triggering an election, at Rideau Hall in Ottawa on Aug 15, 2021 (Sean Kilpatrick/CP)

Dissatisfaction with the federal government is on the rise, according to the newest poll from Abacus Data, which was on the field taking the pulse of Canadians when Justin Trudeau asked Governor General Mary Simon to dissolve the House of Commons.

According to the results, only 41 per cent of Canadians believe the country “is headed in the right direction”. One week ago, just before the start of the federal campaign, Abacus Data had measured that proportion at 46 per cent. Obviously, this drop of five points remains modest, but is still statistically significant considering the sample size of this poll.

In his report, Abacus Data CEO David Coletto stipulates that this voter sentiment could be linked to the anxiety caused by the fourth wave of the pandemic. To wit: In its July poll, Abacus had measured that 46 per cent of respondents believed the worst of the pandemic was now behind us. This proportion has dropped by 15 points since, and now stands at 31 per cent. During the same period, those who believe the worst has yet to come climbed from 15 to 24 per cent.

Obviously, this data cannot be a reassuring sign for Justin Trudeau and his team.

Additionally, while the net impressions of the opposition leaders have remained generally stable this summer according to Abacus, we note that the negative impressions of the Prime Minister have jumped by 5 points since July. Could this be a recoil to Trudeau’s decision to call a snap election this summer? It’s a plausible hypothesis. However, if that is the case, it’s also possible that it will fade away over the next few weeks. Nonetheless, Trudeau’s net approval (positive impressions minus negative impressions) sits at minus-4 (44 per cent negative, 40 per cent positive), a value well within the intervals for the past few months in Abacus Data polls.

What effect do the leaders’ impressions have on the state of the race? Although the correlations between party support and leader approval are not always linear, these numbers may help establish the “floors” and “ceilings” of each party. For instance, the current unpopularity of the Conservative leader means that the party’s growth could be considerably limited outside of its current base (estimated at roughly 30 per cent of Canadian voters). As I have written before, the conservative base, although generally stronger and more faithful than those of other parties, cannot alone propel the CPC to power in Ottawa.

For Jagmeet Singh, his party appears to have the most potential for growth: As of this writing, Singh leads the only party that is projected to record significant seat gains (see table below) according to the most recent 338Canada federal projection (updated daily here).

Obviously, good polls early in a campaign do not necessarily mean more checked ballots on voting day, but it could allow Singh to campaign hard on his party being the one standing in the way of a Trudeau majority.

Interestingly, most of this potential and theoretical growth comes from Ontario. In 2019, the Liberals won 79 of the 121 ridings in the province, against only 6 ridings for the NDP. According to the latest figures, the LPC is projected 10 seats below its 2019 result in the province (see table below), and most of those ridings could potentially go to the NDP. Needless to say, without a dominant seat count in Ontario, the majority Trudeau is coveting might become out of reach.

We could paint a similar picture about Yves-François Blanchet’s Bloc Québécois fight in Quebec, where close to a dozen ridings could flip between the BQ and the Liberals. However, polls have measured BQ support slightly under the party’s 2019 results so far.

Getting out the vote is often much more of a challenge for the governing party, especially when numbers indicate growing pessimism and/or apathy. The Liberals simply could not afford to let it happen.