Philippe J. Fournier: A majority is within reach for the Liberals, but the NDP's current level of support could yet throw a wrench into their plans 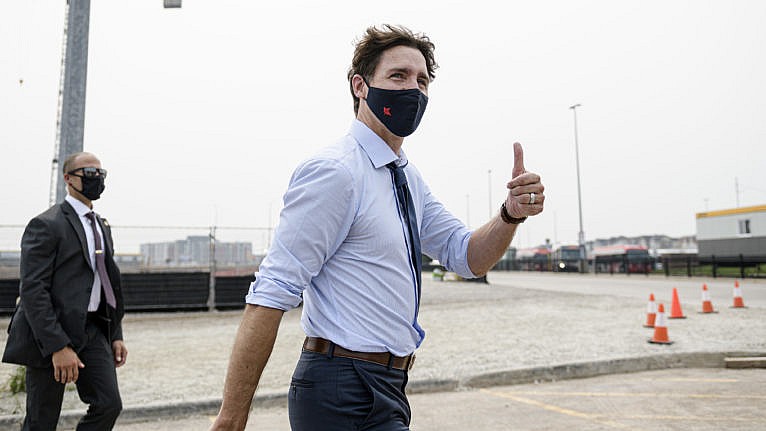 Trudeau greets the media after an announcement in Brampton, Ont., on July, 19, 2021 (Christopher Katsarov/CP)

After months of speculation, Prime Minister Justin Trudeau has finally decided to push all his chip in the electoral pot, betting that his handling of the pandemic thus far (because no, it’s not over) will win over just enough voters in the right ridings to secure a majority at the House of Commons.

While any party’s fortune may turn on a dime if a campaign goes off the track, the data currently available suggests it is not an unreasonable bet. The Liberals have been leading voting intentions consistently for over a year and, according to Léger’s biweekly tracker, close to half of Canadian voters still approve of the federal government’s handling of the pandemic, including 49 per cent approval in both Ontario and Quebec, and 44 per cent in British Columbia. In normal times, these would be considered solid numbers for any incumbent, regardless of affiliation.

Part of the calculations for the Liberals has to be related to O’Toole’s poor personal numbers of late. Poll after poll shows the Conservative leader as the least appreciated federal leader:

However, Trudeau’s path to a majority could get hindered from his left flank. With the NDP nearing the 20 per cent mark nationally, the party could realistically increase its deputation by at least a dozens seats, and many of those would come from Ontario and British Columbia. With such levels of support, many urban seats currently held by Liberals MPs should be targeted by Jagmeet Singh’s candidates. Should the NDP be successful in translating this support into votes, the 170-seat threshold could become out of reach for the Liberals, and we would potentially find ourselves in a near-identical Parliament five weeks from now.

The Liberals remain in first place with a 35 per cent average, merely two-point above the party’s result in 2019. The Conservatives stand in second place with 30 per cent, a level of support decidedly inferior to what the party needs to have any hope to win the most seats. But despite O’Toole’s poor personal numbers, it would be foolish to count the party out: The CPC is still polling near or at its 2019 level of support in both Quebec and Ontario, and remains the dominant party in the West—albeit less so than with Andrew Scheer in 2019. (See complete list of federal polls on this page.)

As mentioned above, the NDP current level of support could potentially throw a wrench into the Liberals’ plans (outside of Quebec). However, polls also show the NDP’s main core of support lies with younger voters, a demographic tranche that historically votes in fewer numbers. This will be the main challenge for the NDP: translating support into actual votes in ballot boxes. In 2019, the NDP underperformed its polls by an average of 2 points nationally, which arguably cost Singh somewhere between five to 10 seats.

In Quebec, the Bloc Québécois has been polling in the high 20s and low 30s in the province for the better part of this 43rd Parliament, enough for a close second place behind the Liberals on average. However, yesterday’s Léger poll showed the Liberals ahead in Quebec by a 12-point margin over the BQ, so Yves-François Blanchet may have to play a little bit of defense in ridings he won by modest margins two years ago.

Here are the 338Canada seat projections at the starting line:

According to the 338Canada electoral model, Trudeau’s Liberals win an average of 166 seats, just below the majority threshold of 170. However, the confidence intervals (coloured bars on the graph) do stretch into majority territory for about 45 per cent of all simulations performed by the model. So while a LPC minority remains the most likely scenario as of today, a majority is very well within reach.

However, Ipsos CEO Darrell Bricker raised a crucial point last week regarding voter turnout. In federal general elections this century, the Conservatives won three relatively low-turnout elections in 2006, 2008 and 2011, in part because of the CPC’s usual high numbers among older (and high-turnout) voters. In 2015, young voters turning out in droves were crucial for Trudeau’s first victory, and many of those showed up again in 2019. How will turnout affect this pandemic election could be a major factor in determining the final seat totals once all the votes are counted.

Later this week, we will dive into more detailed analyses about what regions and what type of voters will each party target to maximize their chances to win. For the length of this 36-day campaign, you can look forward this column several times a week. We will update all the numbers as they become available. Buckle up, dear readers.