338Canada: Was Legault's endorsement a blessing or a curse for Erin O'Toole?

Philippe J. Fournier: With seven days to go, the Liberals now hold the edge. But a big question mark will be the impact of the Quebec premier's backing of the CPC. 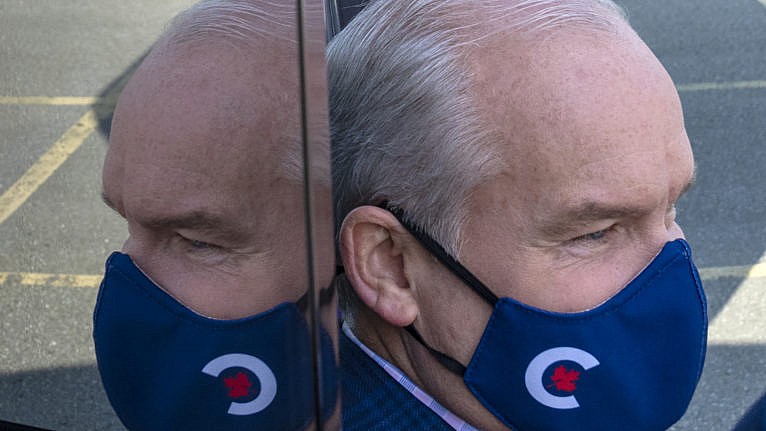 We did not actually believe that Quebec Premier François Legault was going to stay on the sidelines for the entirety of this federal campaign, did we?

While the two debates from the Federal Commission were presented as the main highlights of the past week, one could argue the potentially biggest vote mover event may have taken place not in Gatineau, but in Quebec City, a few hours before the English debate.

In a stunning press conference on Thursday morning, Quebec Premier François Legault gave Erin O’Toole’s Conservative Party (CPC) what amounts to an endorsement by process of elimination, by warning Quebecers against voting for the Liberals, the NDP or the Green Party: “To protect the nation of Quebec, I think we have to be careful with these parties,” he said Thursday morning. “Those three parties, they are not ready to transfer powers to the Quebec government.”

He even double-downed today:

What impact could Legault’s words have on voting intentions of Quebecers as we enter the final stretch of this federal campaign? As of this writing, it is still too early to know whether the needle has moved in a conclusive matter for the Conservatives in the province. However, in Mainstreet Research’s daily update this morning (using data from two of three days fielded after Thursday night’s English debate), the Bloc Québécois ticked upwards at levels comparable to the 2019 election results. If this increase of support translates into votes next Monday, it could hurt both the Liberals’ and Conservatives’ chances of gaining seats in the province. We will have to wait and see whether other polling firms early this week detect the same trend in favour of Yves-François Blanchet’s team.

Nevertheless, with François Legault’s CAQ still reigning alone on top of voting intentions in Quebec (see Quebec provincial polls here) and the Premier’s approval ratings flying sky high at historical levels since the beginning of the pandemic, Erin O’Toole could not have hoped for a better vote of confidence coming out of Quebec—a province where the CPC has never elected more than 12 MPs since the party’s founding in 2003.

Here are the updated 338Canada federal vote projections in Quebec:

The Conservatives sit at 19 per cent on average in the province. Should the CPC actually earn this level of support on election day in Quebec, it would be the party’s best result in Quebec since Stephen Harper’s first victory in 2006, when he earned close to 25 per cent of the vote in the province (but still only won 10 seats).

Nonetheless, according to these numbers, the absolute best-case scenario for Erin O’Toole would be a harvest of 15 Quebec seats (in the 95 per cent confidence interval). While this isn’t anything to sneeze at, O’Toole’s potential paths to victory in this election do not and will not depend much on what happens in Quebec. Should the CPC emerge victorious on Sept. 20, its Quebec MPs would still remain a minor part of the Conservative caucus (unless the polls badly underestimate conservative support in Quebec, something that has not happened in recent federal elections).

The question remains why François Legault decided to spend precious political capital endorsing a party running a distant third in Quebec, and whose platform includes, among other things, scrapping the $6-billion childcare deal Legault and Trudeau shook hands on not even two months ago, and, most importantly, changing the equalization formula—which, if implemented, could potentially cost the Quebec government billions in revenue.

Then there is the question of how this will be perceived outside the province. Whether Legault’s endorsement of O’Toole will have any significant effect on the electorate outside of Quebec remains an open question. As Chantal Hébert wrote in the Toronto Star: “The premier’s popularity may rub off on the Conservatives in Quebec, but his support could have the reverse effect outside the province.” Considering the CPC could, at the very best, gain 4 to 5 new seats in the province, will it all be worth it if Legault’s endorsement ends up costing O’Toole precious votes in swing ridings of the GTA and the Lower Mainland? I do not know the answer to this questions, but both hypothesis—that Legault’s endorsement could either be a blessing or a poisoned chalice—certainly deserve some thought. We should have clearer data on this early this coming week.

Before concluding, let us take a closer look at the national numbers. The 338Canada model now has the Conservatives and Liberals all tied at 32 per cent a piece in the popular vote projection. However, Nanos Research and Mainstreet Research both measured the Liberals ahead of the Conservatives (by 3 and 4 points, respectively) in their daily rolling polls this morning. We expect several other polling firms to weigh in early this week, so these numbers could still change drastically before voting day:

A note on the People’s Party: There has been some disagreement in polls on where the PPC currently stands. Early last week, Abacus Data, Léger and Ipsos still measured Maxime Bernier’s party at between two and three per cent nationally, but others such as Mainstreet Research, Nanos Research and EKOS had numbers between 5 and 10 per cent for the PPC. It is plausible at this point that this increase of support could muddy the waters for the CPC, as at least a fair fraction of those new PPC voters used to be CPC voters. Will the PPC split the right-of-centre vote enough to hinder the efforts of Erin O’Toole? It’s too early to tell.

Finally, here are the latest 338Canada seat projections. The Liberals have regained the lead with an average of 145 seats to the Conservatives’ 129 seats. We should stress here that this gap of 16 seats on average between the Liberals and CPC is much smaller than the model’s confidence intervals (of about 40 seats).

Nevertheless, it is the Liberals who now hold the edge, as they appear to have regained lost ground in Ontario, British Columbia, and in the Atlantic provinces.

Still, with the Bloc Québécois, the NDP and Greens projected at a combined 60+ seats, it is increasingly likely that the 44th Parliament will be a minority government. Of which colour, we do not know yet. There remains high uncertainty in the numbers as public opinion appears to have been in flux over the past days.

This should be an eventful week. Seven days to go.