Where the parties stand on debate day: 338Canada

Philippe J. Fournier: The latest election projection sees the parties deadlocked. But the Conservatives may have reached their ceiling early in the campaign. 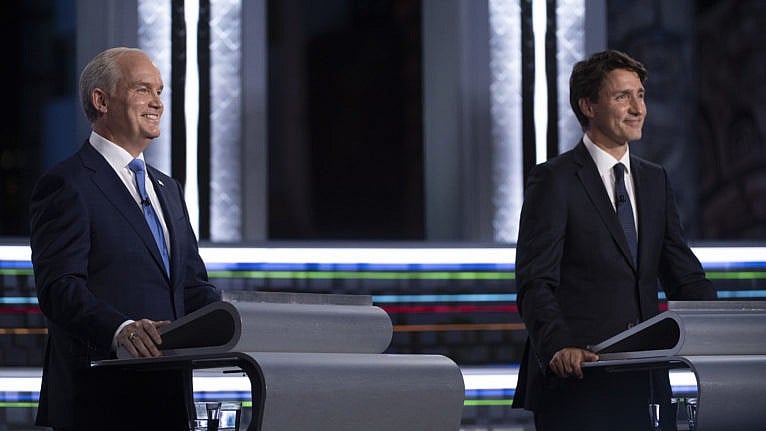 With only 11 days to go in this campaign, the federal leaders will square off tonight in the (only) English debate. After two French debates that were mostly centered on issues dear to Quebec and Quebecers, the rest of Canada will finally hear what leaders are (and aren’t) promising Canadians for the 44th Parliament.

A flurry of polls were released in the past days partly in order to set the stage for the Commission debates this week (see full list here). Last Sunday, I wrote that the Liberals appeared to have stopped the bleeding they had suffered in the first two weeks of the campaign, as support for both the Liberals and Conservative Party (CPC) had stabilized. Since then, however, several polls from Léger, Abacus Data, Mainstreet Research and Nanos Research seem to suggest a modest tightening between the main parties. Other firms such as Ipsos and the Angus Reid Institute have measured a narrow, but still significant 3-point lead for the CPC.

The Conservatives hold on to first place in voting intentions with an average of 34 per cent, a two-point margin over the Liberals (and a margin inferior to the model’s confidence intervals). The Liberals take second place with 32 per cent on average. The NDP, which had shown signs of growth early in the campaign, currently sits at 20 per cent nationally.

While we must always show caution not to overreact to small daily fluctuations, these numbers suggest the Conservatives may have reached their ceiling early in the campaign. Before dissolution, I had hypothesized that the CPC was stuck in a “high-floor, low-ceiling” scenario with Canadian voters. The CPC surge early in the campaign was testament to Erin O’Toole’s effectiveness at getting himself better known to Canadian voters, and several early polls in this campaign showed O’Toole’s personal numbers rising days prior (see this Abacus Data poll from Aug. 20). However, while some would suggest the Conservatives may have “peaked too soon” in this campaign, it is plausible that they simply peaked, and that the 34 to 35 per cent mark represents the party’s new ceiling. In this scenario, only a low-turnout election could elevate the CPC significantly above this mark (which is entirely plausible, but almost impossible to predict with certainty).

In Ontario, the Liberals (38 per cent) and Conservatives (35 per cent) remain deadlocked in a statistical tie, with a slight edge given to the Liberals, while the NDP sits just below the 20 per cent mark on average. Of note: PPC support has grown significantly since the writ was dropped in mid-August. The PPC is currently projected at 5 per cent in the province, ahead of the Green Party.

In Quebec, The Liberals remain in first place, albeit with barely a third of the vote on average. The Bloc Québécois sits in second place with 27 per cent. As for the Conservatives, their support in the province had shown clear signs of growth in the first half of the campaign, but it remains to be seen whether the French debates will have moved the needle either way. The CPC stands at 21 per cent on average in Quebec:

We have observed significant divergence in polls of British Columbia of late. The Liberals began the campaign in first place in B.C., then slipped behind both the NDP and Conservatives in late August, and appeared to have recovered some ground this week. As of this writing, we have a triple-tie in voting intentions in the province with the CPC at 31 per cent, the NDP at 30 per cent, and the Liberals at 28 per cent on average.

The Liberals and Conservatives are also deadlocked in the seat projections, with averages of 142 and 134 seats, respectively. Readers should use tremendous caution in interpreting these numbers however, since this gap of merely 8 seats between the parties’ averages is well below the confidence intervals of roughly 40 seats (the LPC and CPC coloured bars are almost perfectly overlapped on the graph). If the election were held tomorrow, it would be nearly impossible to confidently assign a favourite.

In my experience covering politics, I have found that many leaders debates either end in a tie or have little effect on voting intentions (and often only dyed-in-the-wool partisans pretend to know with absolute certainty what effects, if any, a debate would have on a party’s momentum). There are exceptions, however: as I mentioned before, the 2019 TVA debate completely flipped the script in Quebec in favour of the Bloc Québécois.

Will last night’s French debate move the needle at all in the coming days? Will this one and only English face-off convince the remaining undecided voters to cast their ballot one way or another? I will wait for the data before drawing any conclusions. This is how the scientific methods works: Confronted with new evidence, one must adjust one’s analysis. We should have clearer indications early next week.