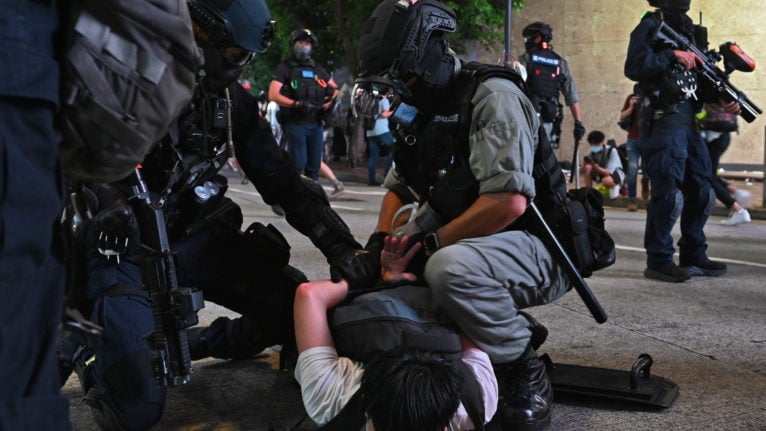 Police officers detain protesters during a rally against a new national security law in Hong Kong on July 1. 2020 (EPA/MIGUEL CANDELA)

Quoting Canada’s foreign minister as part of their justification, 63 MPs, four senators, a former House of Commons speaker and more than 20 community groups have signed a letter urging the government impose Magnitsky sanctions against Chinese officials.

The letter quotes Champagne, who said in a tweet earlier this month: “Sanctions are an important tool to hold perpetrators of gross human rights violations to account.”

Nearly half the Conservative Party caucus signed the letter, including Leona Alleslev, who stepped down as deputy leader of the party on Monday to endorse Peter MacKay in its upcoming leadership election. Current leader Andrew Scheer did not sign it. MacKay and fellow frontrunner Erin O’Toole, a current MP, both endorse the use of Magnitsky sanctions against Chinese officials—MacKay is not a signatory, but O’Toole added his signature to the letter on Tuesday, a spokesperson said.

Community signatories include Abdulahat Nur, the vice president of the East Turkistan Government in Exile; Sherap Therchin, the executive director of the Canada Tibet Community; professor David Welch of the University of Waterloo and a list of other national and local associations supporting Hong Kong, Tibet and Uyghur Muslims.

The world has watched in horror as details trickle out of the Xinjiang province, where some two million Uyghur Muslims are being held by Chinese authorities in detention camps for “re-education,” or the alleged erasure of their religion, language and culture. Meanwhile, China has recently imposed a new national security law on Hong Kong that erodes the city’s long-held autonomy.

The United States has imposed economic sanctions on Hong Kong and, over the treatment of Uyghurs, slapped its own set of Magnitsky sanctions on Chinese government actors. (Magnitsky laws, named after a late Russian whistleblower, have been passed in many democratic countries, most recently in the United Kingdom this month, to enable governments to levy economic penalties on specific foreign officials accused of abusing human rights.)

In late June, 13 senators signed a letter co-written by Housakos that described China’s government as the “biggest threat to mankind.” Tuesday’s letter from ACHK, which has already handed the government a list of officials that it wants to see sanctioned, adds political weight to calls for Canada to join the U.S.

Trudeau’s government has been cagey in its response to any and all concerns about China. The arbitrary imprisonment of Canadians Michael Kovrig and Michael Spavor, a quid pro quo after Canada arrested Huawei CFO Meng Wanzhou in December 2018 for possible extradition to the U.S., has loomed large in Canada-China relations.

Fears over further Chinese retaliation have seemingly prevented Trudeau, Freeland, Champagne and their colleagues from uttering strong words over the regime’s conduct, let alone sanctioning its officials. Still, asked about possible Magnitsky sanctions during a House question period last week, Champagne said Canada is “considering all the options when it comes to human rights.”

CORRECTION, July 14, 2020: An earlier version of this story incorrectly described John McKay as a former finance minister. He was a parliamentary secretary.