99ers and 51ers: Two numbers that could decide an election

One type of politician tries to please the one person who dislikes him. The other ignores the dissenting minority. 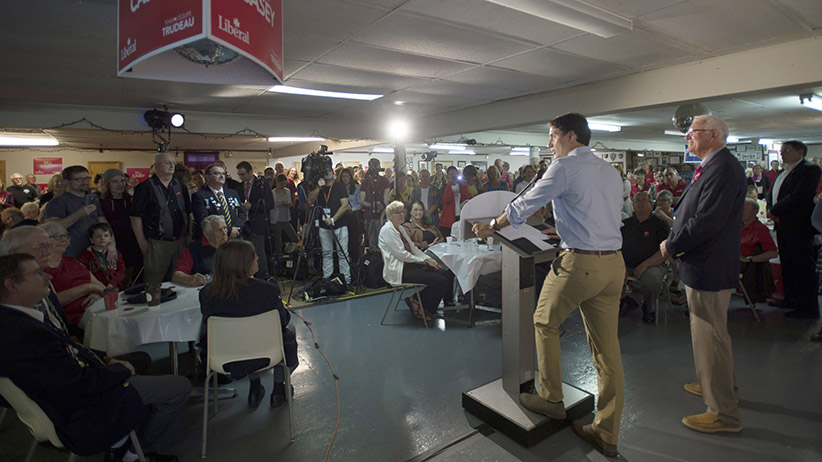 The final debate week of the campaign is supposed to shake off this whole “deadlock” narrative and, if you’re into counting the number of angels dancing on the head of a pin, you can find polls that reveal bits of separation. The NDP is dipping in Quebec, the Conservatives are rebounding in Ontario and the Liberals are inching upward there, too. Okay. I’m watching this too closely; I admit to getting into the daily polls the way Al Pacino dunked his face in a mountain of white powder at the end of Scarface. It’s probably not that helpful.

Pretty soon, the latest paroxysm of predictions will pass, and everyone will settle back into the old cover-your-pollster ass, “it’s still too close to call” conclusion.

So, after you get your poll fix, you have to come up with a way to see this whole campaign unfold. There are, fundamentally, two very different strategies at play to win this thing.

On one side, Stephen Harper knows most Canadians don’t like him, but he’s perfectly okay with that. In fact, he’s built his entire campaign around it. On the other side, Tom Mulcair and Justin Trudeau know most Canadians like them, but they’re still worried sick about it. That’s because political leaders fall into two general categories: Call them 99ers and 51ers.

Bill Clinton is the quintessential 99er. Imagine Clinton is making a speech to a room of 100 people. He knows 99 people love him, but one person tucked in the back despises him. What does Clinton do? He spends his entire speech trying to get that one person onside.

Ninety-niners are charming, charismatic and intelligent. People want to have a beer with them. They are uniters. On the negative side, 99ers can lack discipline. They can be pleasers at the expense of strategy and, sometimes, values. In trying to be everything to everyone, the 99er can end up being nothing to no one. As prime ministers, Paul Martin and Brian Mulroney were 99ers.

Now imagine George W. Bush making a speech to a room of 100 people. What does Bush do? He directs all his attention to the 51 people in the room he needs, and cuts out the others. Bush is a classic 51er. On the positive side, 51ers are disciplined about their core beliefs and stay on message. They serve their base well. On the negative side, the 51er can be divisive. And that divisiveness, though strategic, can end up alienating huge swaths of the voting public and inspire a wave of change that drowns the 51er. The 51er can win, and often does, but relentless divisiveness can be corrosive to democracy.

These are descriptive categories, of course; every 99er is a bit of a 51er, and vice versa, but political strategists dream of the perfect blend of the two: a candidate with the charisma of the 99er and the discipline of the 51er. Democrats in the U.S. once thought that was Barack Obama. He was going to heal Washington’s partisanship and racial wounds, tackle deficits and re-establish America’s place in the world. Polls suggest the math hasn’t exactly worked out that way.

On the march to the Oct. 19 election day, Canadians know our math is different. A leader here only needs 39 people in that room to win big. (Here, we might cue the discussion about dumping our first-past-the-post electoral system in favour of proportional representation. Call me in the morning when it’s not resolved.) But make no mistake: All leaders in Canada are strategically 39ers. They have the swing ridings, the tiny constituencies, the targeted policies and the data to build their precious 39 per cent. Still, their campaigns are very much built around which type of leader they have.

Stephen Harper is clearly a 51er. An Ekos survey in mid-July asked Canadians which emotions best describe how the leaders make them feel. Sixty per cent said Harper makes them “angry” and “discouraged.”

No big deal to Harper. He’s running the classic 51er campaign. Even he has now admitted he’s “not perfect.” It’s all about targeted tax cuts and policies designed to reach his magic number. Protect the base. Create divisions through controversial moves such as the appeal of the niqab decision, or Bill C-51, the anti-terror bill. Always stay on message: tax and terror, the sword issues of the Harper 51er.

Trudeau began by running a classic 99er campaign, but is shifting to a more 51er style as the race tightens. That same Ekos survey found 50 per cent of Canadians say Trudeau makes them feel “happy” and “hopeful.” He hasn’t broken through as the agent of change yet, because the Conservatives’ “Just Not Ready” ad has been devastating. Even Liberals admit it. But his campaign was first built on the 99ers’ group hug.

Before the election, when he was running high in the polls, Trudeau tried 99er tactics to envelop the whole political spectrum. If you don’t like the fight against Islamic State, Trudeau is against it. But if you’re afraid of terror, he supports the controversial anti-terror law. But wait. If you don’t like that law, he promises to change it when he’s in government. Does everyone in the room have something they like yet? Trudeau is lowering tax on some and raising tax on others. Don’t like the current first-past-the-post voting system? Trudeau might change it. A 99er campaign has lots of ideas, many of them good ones and many deserving of real attention, but the core message—time for change—can get lost.

That core message has since snapped into clearer focus. The admission that Trudeau would run three deficits in order to invest in infrastructure was a tack left to outflank Mulcair. Suddenly, it started to stick. The Liberals’ best hope is that Trudeau’s 99er appeal will attract the change vote on both the soft right and the soft left.

Tom Mulcair is the most difficult to fit into these two categories. That Ekos poll found him even more likeable than Trudeau, but, in question period, his prosecutorial style pegs him as a 51er. Historically, the NDP has never minded being 51ers, the so-called conscience of the political landscape. Unions versus business. Rich versus poor. They didn’t want the whole room. (Read the Leap Manifesto released by Avi Lewis and Naomi Klein and you get an idea of what the 51er on the more classic radical left looks like.) But Jack Layton changed all that, transforming himself into the 99er whose policies and personality had a wider, unifying appeal. The now-famous orange wave—the second of which just rolled through Alberta—validated the NDP as a viable choice for change.

Away from Parliament Hill, Mulcair has, smartly, begun his own personal transformation, becoming more 99er in his public persona. He smiles more and debates less. He does the weather on local news. He talks about his family. He’s loose. Still, at his core, Mulcair is a 51er. The NDP likes to call Mulcair “the clear alternative to Harper,” but it may as well say he’s actually quite similar to Harper, in some ways. Speaking with Mulcair in the summer just before the campaign, he sounded distinctly Harper-esque with his simplified, core messaging: $15/day child care; s $15/hour minimum wage; no to the war; no to the anti-terror bill; no frills.

Fast-forward to today and what does he do? Promise four years of balanced budgets. He is desperate for Canadians to see him as a fiscal 51er, someone they can trust to run a $2-trillion economy.

This is the NDP secret sauce. It wants to catch the 99er orange wave with the Mulcair 51er fiscal discipline. Of course, outside of Quebec, it doesn’t mention the Sherbrooke declaration, its position on Quebec separation, a 51er—sorry, a 50-plus-one—position that Liberals don’t think plays in Ontario. The NDP shrugs with the confidence of a 51er. It has owned Quebec and believes it still can. If it really does turn into a change election, advantage goes to the 99er. But there is no guarantee who that will be, Mulcair or Trudeau. The change vote is still up for grabs.

If it turns into a three-way ground war over the economy and security, advantage goes to the 51er. But with the economy teetering between recession and tepid growth, is that Harper or Mulcair?

Okay, I’ll say it: It’s too close to call. In the end, the only number that really matters? 170, the number of seats needed for a majority.