A big business bailout? No, this is just bridge financing.

Politics Insider for May 12: Ottawa turns over a new LEEFF, Dominique Anglade breaks a new barrier and Doug Ford breaks his own rules 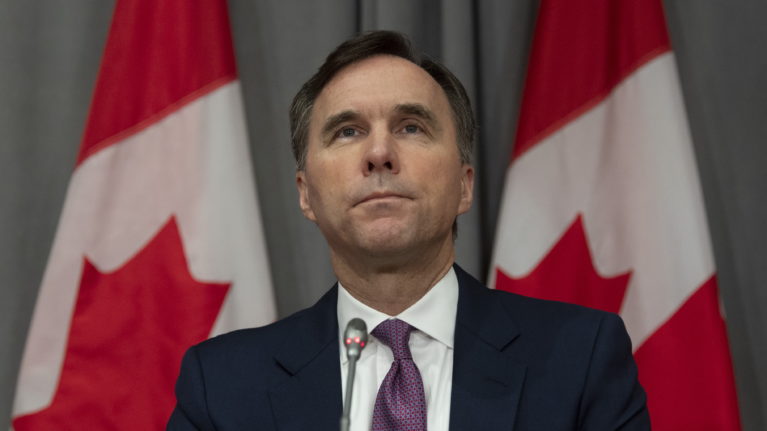 Minister of Finance Bill Morneau listens to a question during a news conference Friday May 1, 2020 in Ottawa. (Adrian Wyld/CP)

Don’t LEEFF out big business: Canada’s corporate giants, many of which are struggling to pay the bills, were waiting for bridge financing to guide them to the other side of the current economic crisis. Yesterday, Bill Morneau announced more liquidity, in the form of loans worth tens of millions of dollars, for businesses that bring in at least $300 million in annual revenue. It’s called the Large Employer Emergency Financing Facility.

The LEEFF, said Morneau, “is not low cost lending for those who don’t need it, nor is it to rescue companies that were already facing insolvency before this crisis.” The FinMin also said the feds would “place strict limits on executive pay, on share buybacks and on dividends,” and added companies convicted of tax evasion were ineligible (presumably a response to this advocacy).

The LEEFF’s eligibility criteria also mandates companies will “commit to future climate disclosures and environmental sustainability goals.” As for those critics who warn against giving Canada’s biggest corporations an unnecessary b-word, Justin Trudeau put up a pre-emptive defence at his 50th daily pandemic presser: “Let me be clear, these are bridge loans, not bail outs.” (Read Trudeau’s full remarks here.)

Conservatives panned the program. Michelle Rempel Garner said the LEEFF didn’t include any job guarantees. Pierre Poilievre added the government might be limiting executive bonuses—but it’s not banning them. “The entire program risks becoming a massive handout to the most influential corporate players with the best lobbyists,” said Poilievre.

The Speaker of the House, Anthony Rota, gave notice that he’d recall the House of Commons tomorrow at 2:30 p.m. Some emergency legislation appears to be in the offing, but by press time Maclean’s wasn’t aware of any specifics.

Dominique Anglade, a Liberal member of Quebec’s national assembly, was vying for the party’s leadership against just one other candidate. But when Alexandre Cusson dropped out, Anglade became the first black woman to lead a political party in Quebec. 338Canada’s latest projection has the Liberals a distant second to François Legault’s CAQ—though the province’s most recent poll had Anglade’s party on Legault’s heels.

How prepared was Canada? Paul Wells dug up an issue of Healthcare Management Forum, a journal for Canada’s health leaders, published this past March. In those pages, he found a paper penned by Theresa Tam, Canada’s chief public health officer, on how to plan for public-health emergencies. Wells learned she largely wrote the paper, released after the pandemic hit Canada, before anyone had ever heard of COVID-19. Which means readers can apply a healthy dose of hindsight to her insight.

Go on and golf: Max Fawcett is an unapologetic golfer, and recognizes the privilege inherent to the pursuit of eagles and birdies. But, he writes in Maclean’s, even the game’s harshest critics shouldn’t ignore the clear benefits of opening fairways and greens to those who can drag their clubs around a course for a few hours.

Golf, for all of its sins, is a low-risk activity. It may well be the perfect sport—okay, game—for an environment where social distancing remains a necessity. And golf courses offer an important opportunity for physical and mental stimulation for Canada’s seniors, who may not be able to participate in more strenuous activities like cycling or jogging. It’s not a zero-risk activity, but few things that involve us leaving our homes right now are.

Ontarians won’t tolerate any more tinkering with long-term care: As hundreds long-term care homes across Canada are fighting coronavirus outbreaks, the plight of their residents is front-and-centre in countless news reports that investigate the depth of lapses in patient-care. Ontario NDP leader Andrea Horwath, writing in Maclean’s, says enough is enough.

We need a complete overhaul. This starts with a comprehensive public inquiry into long-term care, creating a long-term care residents’ bill of rights, restoring a legislated minimum standard of care for every resident, and funding care homes so they can meet it.

Ontario Premier Doug Ford can’t seem to help himself. After copping to a verboten cottage trip—a quick jaunt to check on some pipes that prompted a Ford mea culpa—he dug himself another hole on Mother’s Day. The premier lives with his wife and two daughters, but his two other daughters, who live elsewhere, visited on the weekend. That’s a technical violation of the province’s physical distancing rules—and, for anyone who can spare some compassion, a reminder of how desperate families are to connect.

Stimulus spending: Statistics Canada revealed yesterday that condom sales spiked by 30 per cent in the second week of March and 41 per cent the week after that—and pregnancy tests followed a similar trend. But the surge didn’t last long. “While Canadians purchased more condoms at the outset of the pandemic, sales slowed in subsequent weeks to historic levels.”