A Canadian bottleneck in Kabul is endangering innocent lives

Paul Wells: People struggling to escape and those helping them are running up against procedural confusion layered on top of constant mortal danger 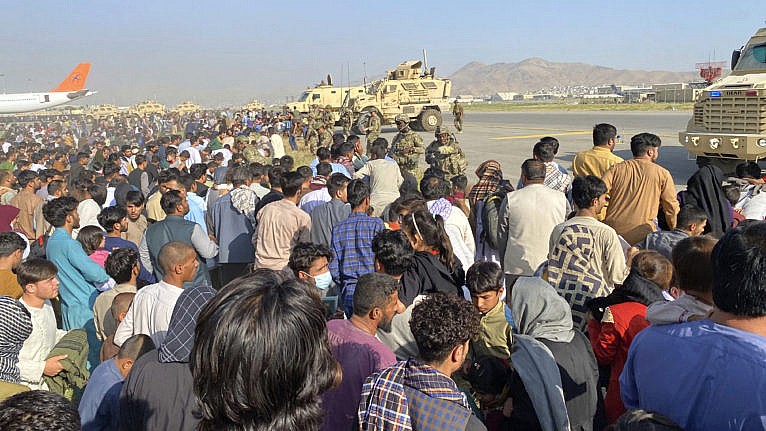 U.S soldiers stand guard along a perimeter at the international airport in Kabul, Afghanistan on Aug. 16, 2021 (AP Photo/Shekib Rahmani)

A coalition of non-governmental organizations trying to get Afghans with a history of helping Canadians out of war-torn Kabul says immigration bottlenecks are putting those innocent lives at risk.

“Our immediate concern is, can IRCC simplify the process?” David Fraser, a retired Canadian major-general who is trying to get 1,650 people out of Afghanistan, said in a telephone interview, using the initials of Immigration, Refugees and Citizenship Canada.

That’s becoming the unanimous request of groups that are working with Canadian officials, and with small groups of frightened Afghans on the ground around Kabul, to help people escape the chaos that has engulfed the Afghan capital.

The Canadian government needs to provide “clear guidance” to those people trying to get out, Fraser said. “When do they want them to move? Where do they want them to go? And keep it simple. Because we’ve got groups that have been sitting on the ground 12, 24, 36 hours, making the trip [from safe places around Kabul to the fences and crowds surrounding Kabul’s airport] two or three times. And the conditions—I can’t describe. They have to go through Taliban checkpoints, Afghan security checkpoints, a sea of humanity, panic, to get up to a gate to find somebody to connect with and identify with.”

Fraser said the most evident bottleneck is the work by immigration officials to process the applications of candidates for transport. Government officials on Saturday told reporters in Ottawa that IRCC is working to clear applicants as quickly as possible. And they’ve been relaxing requirements as they go. Since mid-August, applicants seeking to leave Afghanistan no longer need passports. Visa officers are working around the clock, the government officials said, and rather than using email or requesting additional documentation, where possible officers are calling applicants or their representatives to seek the information required.

Fraser, who has been pushing the government for two months to get Canada-linked Afghans out of the country, said he doesn’t doubt the good faith. “There’s a lot of criticism of Harj,” he said, referring to Defence Minister Harjit Sajjan, who served under Fraser in Afghanistan 15 years ago. “On this one, I’m giving Harj full marks. He’s pushing on this one. I don’t know what’s happening underneath him, you know, in the department. And Marco [Mendicino, the immigration minister] has been pretty good on this one, too. But the bureaucrats are being bureaucratic.”

At a news briefing Sunday with ministers responsible for the evacuation effort, CTV News anchor Lisa LaFlamme asked about some of the people she’s been in contact with. “The Afghan families that we are tracking received a text [Saturday] to proceed to the airport on their own. Then they were told not to go. There were several texts back and forth, complete confusion,”  she said. “There were no buses, no Canadian soldiers, no military escorts to get them there safely to the airport—as France managed to do. I wonder why not. And is there a plan for Canadian Forces to go outside the wire to help these people successfully and safely get to the Kabul airport?”

Sajjan said Canadian special-forces soldiers at the airport are “doing everything in their power” to help, but that operational security kept him from giving more detail. Canadian soldiers have, however, “done some very creative and interesting work to be able to connect with people and guide them.”

Mendicino added that his department is “remaining in constant contact with everybody that has applied under our programs, giving them as much direction with regards to where and when and how to stay safe as possible.” Officials “will exhaust every effort to continue to process those applications as quickly as possible.”

Kevin Newman, the former Global and CTV news anchor who is working with the NGO group, points out that so far, Canadian transport flights have been taking off with other countries’ nationals on board—an indication that other countries have been more successful than Canada at finding and processing people who need help. In an article for the newsletter The Line, Newman decried “the government’s obsession with paperwork. Even [on Sunday] Canadian officials on the safe side of the airport controlling who might get through were reported by eyewitnesses to be taking an ‘extremely strict’ approach to paperwork verification. Only those granted full Canadian citizenship under the government’s Special Immigration Measure are being told they qualify to leave. That requires a lot more work to process and is perhaps less than a tenth of all the Afghans who are known to have applied and are in various stages of completing multiple forms.”

The people Fraser, Newman and others are trying to help are disproportionately from Kandahar, where most of the Canadian military effort was concentrated between 2005 and 2011. They’ve had no government help getting from Kandahar to Kabul, a 500-km drive on the notorious Highway 1 with its banditry and Taliban checkpoints. And now they’re caught in administrative limbo, unsure when it’s safe to approach the airport or whether their efforts will succeed if they do. Their numbers grow daily. “It’s been hard,” Fraser said. “Just excruciating.”