The case for keeping Tom Mulcair

Many NDP insiders want Mulcair to step aside. But is there anyone to replace him? 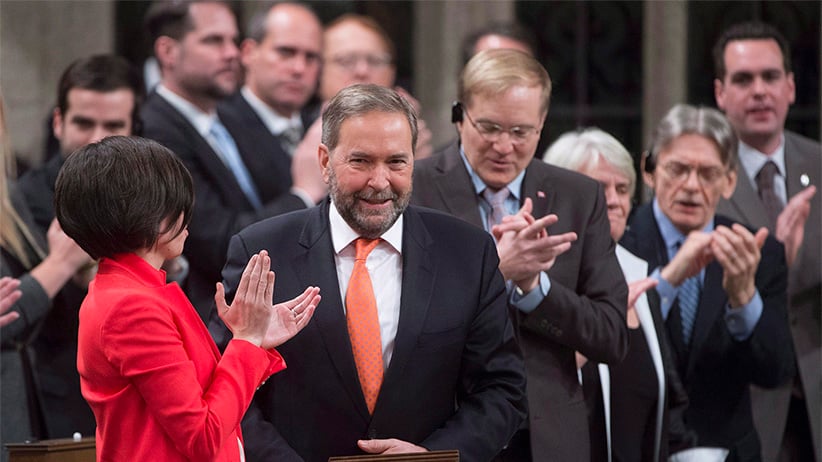 The case for keeping Tom Mulcair as NDP leader is simple.

The New Democrats achieved much of that result by sticking with a leader even after disappointments. Jack Layton tasted disappointing results three times before 2011. Each time his party had hoped for a much greater breakthrough than what it got. If he had walked away earlier, he would simply have left another rookie leader to start over again. In Canadian politics, incumbency is usually a greater virtue than novelty. (You will say: But what about Justin Trudeau? I reply: A guy named Trudeau is a poor argument for the winning power of novelty.)

The NDP does not, today, have an obvious leader-in-waiting who could replace Mulcair. The party’s largest provincial caucus is still in Quebec: which successor from outside the province could speak to those voters? Its deepest traditions of electoral success lie outside Quebec: Which Quebecer could tap into those wellsprings?

So: an electoral result that’s solidly in line with three of Jack Layton’s four tallies. A leader who has (surely) (I’m guessing here) (but surely) (well, I mean, you’d think) learned from defeat and can apply those lessons. A party that’s hard to govern without perfect command of two official languages, and no active campaign to find that replacement leader.

That’s the case for keeping Mulcair. I’ve made it before, in pieces here and there. The case for replacing him is the one I keep hearing from New Democrats. Unlike me, they’ll get a vote when the party decides in April whether to call a leadership convention.

Related: Thomas Mulcair on being ready to spar in 2016—including for his job

“There’s sort of this hope that he does the right thing,” one prominent New Democrat told me when I called to ask about Mulcair’s future. “Right thing,” in this context, means that Mulcair would stand down as leader before April and call for members to elect a new leader at their next opportunity.

“Membership is pissed,” another New Democrat wrote me in an email.

A third—and I know I’m not giving you any names; that was the condition for each of my interlocutors to speak freely—admitted to fearing the party will passively accept Mulcair as leader because “New Democrats don’t like to win.”

Back to my first anonymous source. “There are a few angry, angry, angry people,” this person said, “who I would say are concentrated among the MPs. They’re pinning everything on Mulcair.” This person thinks it’s harsh to blame Mulcair entirely for the loss of 51 seats last October. Justin Trudeau also had something to do with it.

“But I would say there’s a growing consensus that Mulcair needs to step aside,” this person continued. “But there’s no organizing or campaigning going on.”

The constitutionally mandated leadership review after an election is a simple matter. Delegates to a national convention vote on whether there should be a new leadership convention. In any party, dissatisfaction with the leader is unlikely to crystallize unless there’s a present and available alternative. As of this week the NDP has none. There’s some talk about Alexandre Boulerice, the svelte and bearded MP for Montreal’s Rosemont–La Petite-Patrie riding. He has zero name recognition outside Quebec, and something very close to zero inside. But he is a veritable Kardashian compared to another name put to me: Ryan Meili, an amicable and bearded physician from Saskatoon, who twice finished in second place behind other candidates for the Saskatchewan NDP leadership. So yes, I’m aware that his power base is in Saskatchewan and that he’s never won there. Also I’m aware that everyone I’ve mentioned so far has beards. You have something against beards? Meanwhile, neither of these two is even campaigning; they are somebody else’s idea of potential Mulcair replacements.

It would be nice if no replacement were needed. With three months to secure his job, Mulcair should be making friends as fast as he can. How’s that going? “He’s not romancing anyone, that’s for sure,” my chattiest source said. “The most natural constituency is his caucus. And he’s being a dick [to them].” How so? “We had a big caucus after 2011, and the organization was pretty hierarchical. Now it’s far smaller, but he’s still doing that hierarchical thing. Not asking for opinions. Still having that small circle around him. Not treating you like you matter.”

Maybe Mulcair will launch his charm offensive when the House returns at the end of January. Maybe he has no need to charm anyone. With no credible replacement, his opponents may well fold their tents. That’s not an ideal campaign slogan for 2019, but you make do with what you’ve got.