Inside the battle for Ottawa's public-service vote

In Ottawa, it seems no end of Conservative candidates want civil servants to know how much they care. Oh, and the PM does too. 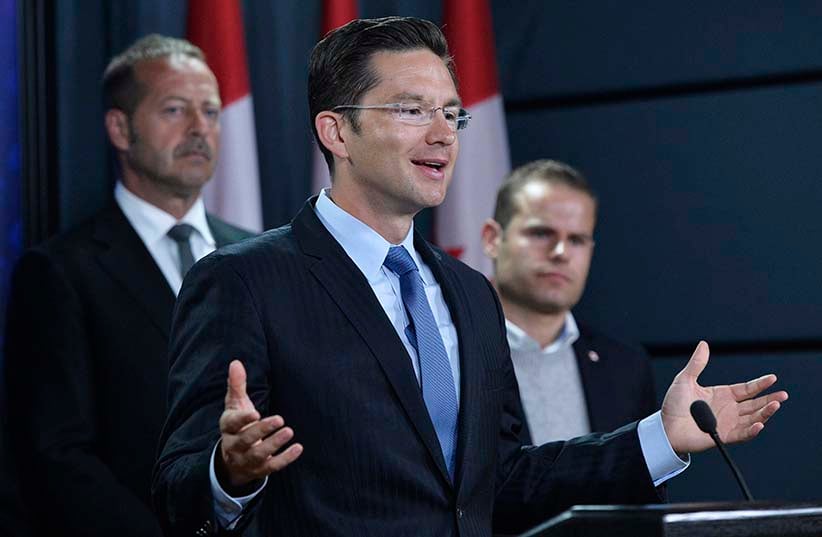 Federal public servants, accused in the past by the Conservative party of abusing sick leave, making too much money and being generally untrustworthy because they’re all a bunch of Liberals, heard a surprisingly different message on Thursday from Ottawa-area candidate Pierre Poilievre.

Public servants “have worked with integrity and professionalism to make this government a success. Canadians are well-served by our world-class public servants, and our Prime Minister has seen their work and appreciates it first-hand,” Poilievre said. “Our government is thankful for the hard work of public servants in upholding the interests of Canadians,” he added.

Framed as a response to “misleading” statements from public-sector unions, Poilievre had invited the media to hear him discuss an open letter from Conservative Leader Stephen Harper, who has led the government for almost 10 years. Curiously, he was there rather than Conservative candidate Tony Clement, the incumbent from Ontario cottage country, who, as Treasury Board president, would be the lead minister on public-sector issues. More curious, arranged around Poilievre were the nine other Conservative candidates running in the Ottawa area.

It was almost as if the Conservatives felt the need to reassure and reach out to the more than 127,000 federal public servants living—and voting—in the Ottawa area.

If you include all three levels of government, there are more than 142,000 bureaucrats in Ottawa and Gatineau, the city in Quebec across the Ottawa River from the capital, according to the latest Statistics Canada numbers. Ottawa alone accounts for more than 98,000 of those workers, 89,000 of whom are federal, making the civil service a substantial voting bloc in the capital. And while they’re concentrated in the downtown core, plenty live in the suburbs. When the Ottawa Citizen crunched the 2011 numbers before the government cut 20,000 federal jobs across the country), it found that, in pockets of Orleans and the city’s southwest end, more than a third of the population worked for the government. In other pockets, government workers constituted between 27  and 32 per cent of the population.

The Conservatives may be in trouble in a couple of those ridings, according to polling by Environics at the end of September. (The polls were commissioned by Lead Now as part of its Anyone But Conservative campaign.) The polls suggest the Liberals have the lead in two of four ridings that are currently Conservative. (The ridings have been redrawn, but the territory they cover was held by Conservative MPs in the last Parliament.)

In Kanata–Carleton, which borders the west side of both Nepean ridings, Conservative Walter Pamic has a seven-point lead over Liberal Karen McCrimmon, at 44 to 37. On the east side of Ottawa, Liberal Andrew Leslie leads incumbent Conservative Royal Galipeau 51 to 36.

The Conservatives are also suffering the loss of John Baird, a long-time local politician who represented Ottawa West–Nepean under its old boundaries and, most recently, served as Canada’s foreign affairs minister, stepping down from the position earlier this year to work in the private sector. That left Poilievre as the most notable Conservative politician in the Ottawa area, an MP who doesn’t hold the same reputation as Baird for working well with his opposition colleagues on local issues.

Still, with two weeks left, it seems the Conservatives are trying to shore up their credibility with federal public servants. Harper’s letter follows one by Liberal Leader Justin Trudeau that portrayed Trudeau as a partner for government workers.

“Respect and trust for our public servants by the federal government has never been so low, and I want to take this opportunity to assure you that I have a fundamentally different view than Stephen Harper of our public service,” Trudeau wrote in the open letter.

The Conservatives made the slights as recently as June, when the government passed its omnibus budget bill, C-59, which included a measure that allows it to impose a collective agreement on its employees.

Debi Daviau, president of the Professional Institute of the Public Service of Canada, said Harper’s open letter suggests the Conservatives in the Ottawa area are feeling “quite desperate. You can bet that these guys have had a lot of doors slammed in their faces, at this point,” she said. “I’m thinking that they’re facing a lot of opposition, when they’re going door-to-door in this region.”

Poilievre told reporters that the Conservatives’ current sick-leave and pension proposals protect public servants, and pledged to continue to protect those protections if the party is re-elected. Asked to qualify the party’s relationship with federal bureaucrats, Poilievre didn’t miss a beat. “We have a good relationship, and we’re very lucky to have the best civil servants in the world, who have helped us balance the budget, cut taxes and protect Canadians from terrorism,” he said.