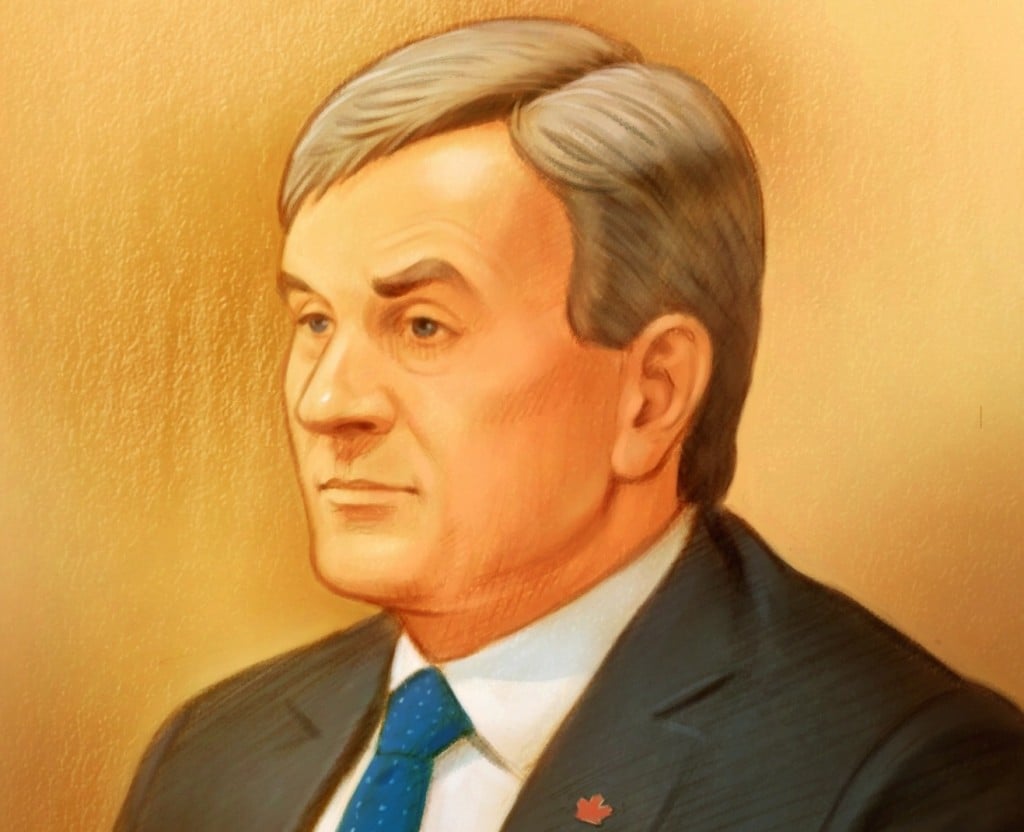 The lunch in question took place on Jan. 3, 2012, at the Royal Vancouver Yacht Club.

Seven men were in attendance and, in aggregate, they represented a certain rarefied clime of Canadian life.

There were the Andrew Saxtons (senior and junior), the elder a self-made real estate developer who arrived in Canada from Hungary in 1947 as an orphan, and the younger, his son, an international financial services veteran who’s now the Tory MP for North Vancouver.

Then there was the man whose presence had brought these gentlemen together: the senator for Prince Edward Island, Mike Dennis Duffy.

The subject of the monied realm these men inhabit came up just obliquely in the course of proceedings today in Courtroom 33, at Ottawa’s Elgin Street courthouse, where Duffy, now a suspended senator, is on trial facing 31 counts of fraud, breach of trust and bribery.

What kind of lawyers were the lawyers at the yacht-club lunch?

Bayne was gesturing to the invisible distance between these two categories, and the difference was money.

Andrew Saxton, Sr. paid for lunch that day. He paid $219.13, or $195.65 before taxes, he testified from Vancouver via long-distance telephone.

Andrew, Jr., wearing the obligatory Tory-blue tie, had already told court he couldn’t recall the amount, but that his father would tell them precisely. Here, just as predicted, were the exact figures.

Crown prosecutor Mark Holmes asked the elder Saxton whether there was some significance to this:

“Are you perhaps revealing something of the nature of your success?” Holmes asked.

“No, I have the bill in front of me,” said Saxton, his Hungarian youth still in his voice.

So, these were the circles Duffy, as senator, found himself running in during the winter of 2012. The yacht-club lunch meeting was a pre-budget consultation, which isn’t anything Ma Kettle gets invited to. This particular consult was put together by Saxton, Sr. on behalf of “my son, Andrew Saxton, MP,” as he put it during his testimony.

Andrew Jr. couldn’t recall much of what was discussed, or if any of it made its way into the federal budget tabled the following March. Bayne offered to jog his memory.

Reading from a dispatch Duffy sent Nigel Wright, then still chief of staff to Prime Minister Stephen Harper, two days later, and which summarized the discussion, Bayne asked Junior if he couldn’t remember pipeline issues, the loss of tax revenues due to the delays in laying this pipe, the mercenary use of Canada’s low interest rates by Farm Credit Canada to undercut its competition, the strong support in the room for changing IRBs so they could be used to finance SMEs—awesome fun stuff like that.

Pipelines? “It’s a very common topic in B.C.,” said the younger Saxton, who is parliamentary secretary to the president of the Treasury Board.

Saxton, Sr. called Duffy a longtime acquaintance, a man he’d met several times in the past in connection with Saxton’s involvement in BCTV, the Vancouver CTV affiliate, the very network where Duffy spent much of his career in broadcast journalism.

Did Saxton, Sr. and Duffy continue their correspondence after the lunch meeting? Holmes wanted to know.

Even across the tinny connection of that long-distance telephone link, the elder Saxton came across as in command of the room, not to be toyed with, a guy of humility but also of enormous success. His son, after finishing his own testimony, took a seat in the first row of pews in the gallery, sipping from a Styrofoam cup, to hear his dad testify, as though this were a show not to be missed. Responding to a reporter’s questions just prior to Saxton coming online from Vancouver, where it was still very early in the morning, the son said his father was 86, but was still first in the office every day. “He turns the lights on,” the younger man said.

“My life is an open book,” the older man told Holmes, when he asked him to talk a bit about his background. “How much detail do you want?”

Now, in answer to Holmes’s question about whether he’s continued his dialogue with Duffy, Saxton, Sr. said that yes, there’d been what he described as a “one-sided communication” with him, “to which I have not replied.”

Did Mr. Saxton have that email?

“The answer is yes,” said the voice on the speaker phone.

What was soon produced was one of the more explosive exhibits we’ve yet seen in Courtroom 33.

“Your honour,” said Holmes as he approached the clerk, “I have a copy of this.” Observers watched a single sheet of paper exchange hands before the bench.

Bayne wanted to know if there was an extra copy. He’d been given a copy in disclosure, of course, but he did not have it at the moment. Holmes passed him a printout.

The document is an email Duffy sent Saxton, Sr. on Feb. 1, 2014, a few months after his suspension. Saxton agreed that he had provided the RCMP with the email during an interview.

The subject of the electronic missive: “Confidential update.”

“Dear Andrew,” Holmes began, quoting from the document, before jumping down to the fourth paragraph: “I am proud of the fact that, at the great luncheon at your club, where you explained the ‘discount’ we are giving the U.S. for our oil, I was able to bring the case for the pipeline directly to the PM.”

Saxton made it clear he had no idea whom Duffy contacted or what he told them of his lunch-hour comments about pipelines.

“You told us that you did not respond to it,” Holmes told Saxton.

For a long while, Saxton did not reply.

“Why not?” Holmes asked again.

“I didn’t want to be involved,” Saxton answered.

Observers in the court could not immediately know what Saxton meant. Then they read the email.

“Snowing here today, and all winter has been cold as Hades,” Duffy writes.

He describes his heart and other health issues.

Then he goes on.

“In the meantime,” he writes, “the RCMP have been all over me and, despite their bluster, have found nothing criminal. I simply did as I asked, and followed the Senate rules as they were then written. There are hundreds of emails which bear this out, and which would not be helpful to the PM if they were to come out. So I am hoping the entire thing will be declared ‘political’ and be allowed to slip away.”

Duffy goes on to describe the January 2012 lunch as “one of the highlights of my (now interrupted) Senate career.” He adds: “I am looking for work, and if you know of anyone who might be able to use my services, writing, editing etc., I would be most grateful.”

It seems unlikely this is the only note of this kind Duffy sent after his suspension in the fall of 2013. And it is not entirely clear what—if anything—Duffy is asking of Saxton, Sr. It could be so many things.

Holmes asked both Saxtons whether they’d ever eaten with Duffy at The Keg chain of steakhouses. Neither had. The significance of these questions appears to arise from Duffy’s celebrated diaries, which, on Jan. 2, 2012, a day before the yacht-club lunch, notes: “Dinner—Andrew Saxton et al The Keg $400.”

The allegation would seem to be that Duffy was padding his itinerary with make-believe meetings in order to help justify his and his wife’s flights over the holidays to Vancouver, where Duffy has children living.

Bayne had no questions for Saxton Sr. “Can I hang up now?” asked the man in Vancouver.

Afterward, Duffy approached his lawyer and appeared to ask him to look at the document at issue. He read it assiduously.