The finance minister on losing his seat, the Liberal surge, and what he plans to do this weekend 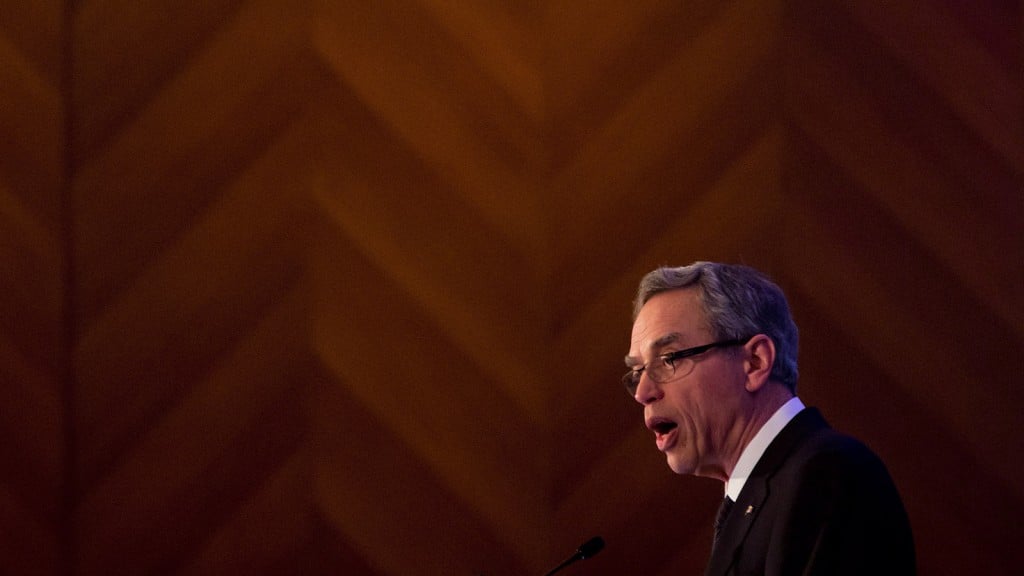 Joe Oliver likely wouldn’t choose to enter Canadian history books for being only the third sitting finance minister to lose a federal election race, but, so far, he’s taking it in stride. The 74-year-old was first elected to Parliament in 2011 after a career as an investment banker and securities regulator, and was almost immediately named natural resources minister at a time when the Conservative government was trying to get the U.S. to approve TransCanada’s Keystone XL pipeline extension. He verbally scrapped with environmentalists, calling them radical, and spent much of question period on his feet, defending his government’s approach to Canada’s resource industry. When Jim Flaherty resigned as finance minister, Stephen Harper turned to Oliver to replace one of his most trusted ministers.

Oliver spoke to Maclean’s the day after he was defeated by Liberal Marco Mendicino in Toronto’s Eglinton–Lawrence riding.

Q: How are you feeling?

A: I’m feeling pretty good. Obviously, when one enters a highly competitive contest, one wants to win. But that wasn’t to be, so I’m sort of reflecting now on what I, and what our government, accomplished, and I feel pretty good about that. I also feel very grateful for having had the opportunity to represent the people of Eglinton–Lawrence in Parliament. It’s a tremendous honour. And for having been appointed by the Prime Minister as minister of natural resources and minister of finance.

Q: Which of those two was your favourite?

A: Well, Finance touches everything and everybody. It also drew on my experience as an investment banker and as a securities regulator, so I felt that I was well-prepared for it—as well-prepared as you can be when you start a new portfolio. I found it tremendously gratifying, and I felt particularly good in bringing down a budget, which was balanced socially and fiscally. I have to tell you that the portfolio of minister of natural resources is a very important one for the country, and I relished it, as well.

Q: You mentioned last night that, given the polls of the past couple of weeks, you felt the Liberals had strong support. Even so, did it come as a surprise to you when you saw the results roll in last night?

A: I saw the momentum building and I didn’t know whether it would continue or whether it would abate. Usually, momentum continues. So I wasn’t shocked, but I didn’t expect a Liberal majority. At that point, [on] the last day, I was expecting a strong minority.

Q: What about your own riding? Did you think you would hang on?

A: I thought I had a reasonably good chance. Initially, the internal polls were stronger than the external polls, and they were live polls, so they were quite accurate, as opposed to the more mechanical polls. But we did a few, and there was a noticeable decline in support over the weeks as the Liberal momentum built. That was related, of course, to what became a precipitous collapse in the support for the NDP. It was quite remarkable, because the NDP candidate in my riding was a well-known person [former Saskatchewan finance minister Andrew Thomson], who was featured prominently in the media, because he was adding credibility to the NDP on fiscal and financial matters—they didn’t have much credibility before— and he was also campaigning, which his predecessor had not done. So I expected he would have somewhat more support than his predecessor. In fact, he ended up with considerably less, and that was significant.

Q: The Conservatives talked a lot about the election being about the economy, and you’ve talked about your balanced budget and your party’s record on the economy. Did that not resonate with Canadians? Or was there something else they saw as the main issue?

A: That’s an interesting question. Pocketbook issues almost always are the central issues of an election campaign. A lot of other things are talked about, but when people get into the voting booth, they think about what the impact will be on them and their families and their lifestyle and their job prospects and so on, and we felt that our message of low taxes and a balanced budget would resonate better than high taxes and massive deficits. Furthermore, we believed in our own platform. We felt, and I continue to feel, that that is the best policy for the country, but, clearly, it wasn’t the only thing people were looking at.

There seemed to be such a desire for change that that overwhelmed that message. Now it could also be that people bought the economic platform of the Liberal party. I’m not dismissing that, but it wasn’t that clear from me going door-to-door that people were saying, “No, we want to pay higher taxes and put more money into infrastructure, which would drive us into deficit.” I’m not saying some did not, but I did not hear that as a recurring theme.

Q: Do you think the Liberals were effective at making the case that they were only going to raise taxes for the very rich?

A: They were fairly effective at that, and not talking about the fact that they were also going to be raising payroll taxes, which, of course, is a regressive tax, because it affects disproportionately people in the lower- and middle-income classes. So we talked about that, but maybe it didn’t resonate as well.

Q: What do you do now? You’ve got an accomplished career; you’re turning 75 this year. Is this the time where you sit back and go to a cottage?

A: I don’t have any immediate plans. I have an extensive background in the private sector, and now in the public sector, and I want to continue to contribute in whatever way I can that is meaningful. It’s not for today, but, at some point, I want to be engaged. I like to write and I like to talk, so maybe there will be some opportunities, but I think I’m going to be able to do it in a less charged environment.

Q: What about this weekend?

A: I have five offices. We’re closing the campaign office. There’s a constituency office, the regional minister’s office, and I’m going to Ottawa, I think, on Thursday, to sort of say goodbye to the officials and to close out my Hill office, and the Finance office, as well. And say goodbye to staff.

I’ll also be connecting with some caucus members and talking about what the prospects are for the party, going forward. I think those of us who have been involved feel passionately about the party and about this conservative cause, and we want it to continue to be a strong voice in the country. Clearly, there’s going to be a leadership review, and I’m pleased there are so many strong and able men and women in our caucus and outside the caucus who might decide to present themselves, so I’m looking forward to seeing who, in fact, will be involved, and then I may make a decision about who I might support.

Q: Anyone who you have your eye on right now?

A: There are a number of names that are being bandied about. As I say, I think we have a lot of talent and I’m sure a good decision will be made, but that’s for the next few months.

Q: What do you think the future holds for Stephen Harper?

A: I think that’s for him to tell everyone. But he’s an extraordinarily able person who has, in my opinion, led the country well for almost a decade. He’s had vast international and domestic experience, he’s well-known on the world stage and has helped manage a $1.9-trillion economy, so I’m sure there will be very meaningful opportunities for him, going forward.