'A final goodbye, and an all-too-rare show of respect'

Funeral marks conclusion of an extraordinary week of public remembrance 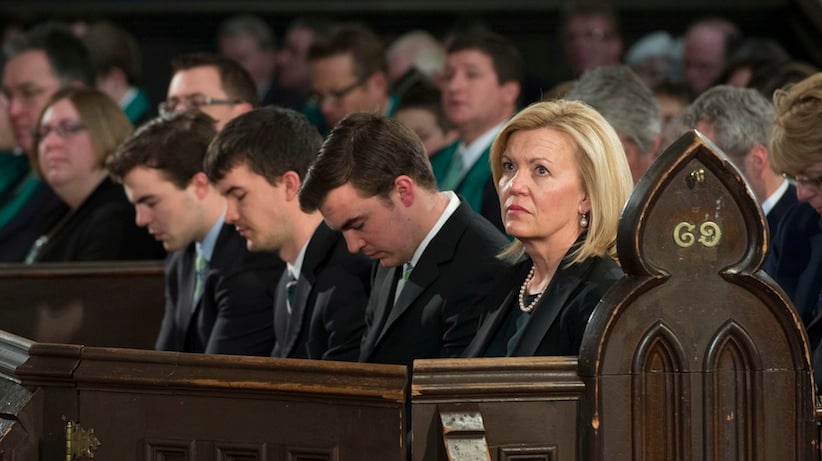 The subtle sartorial tributes were in evidence for blocks around: green ties poking out from under men’s overcoats on a frigid spring day as they made their way to Toronto’s St. James Cathedral. During the course of a 20-year career in provincial and federal politics, Jim Flaherty had come to be known for his inexhaustible collection of emerald neckwear—a nod to his proud Irish heritage. But now in death, he seemed to have become a fashion trendsetter.

More than 1,100 people gathered Wednesday for the state funeral of Canada’s recently retired Finance Minister, filling the pews of the ornate Anglican church, and two large white tents that had been set up on the lawn outside to accommodate the overflow. Prime Minister Stephen Harper and his wife, Laureen, sat in the front row, across the aisle from Ontario Premier Kathleen Wynne and her spouse, Jane Rounthwaite. Former Governor-General Adrienne Clarkson and her husband, John Ralston Saul, were right behind. Then came Brian Mulroney, the former PM, accompanied by his daughter Caroline. Thomas Mulcair and Justin Trudeau were farther back in the crowd, along with almost every member of the federal cabinet, as well as former high office holders like John Turner, Mike Harris and Ernie Eves. The handout list of the dignitaries in attendance was two pages long.

But it was the family Flaherty left behind with his sudden passing at age 64 that was the focus. His triplet sons, John, Quinn and Galen, and his widow, Christine Elliott—herself a member of Ontario’s provincial legislature—occupied the centre aisle, directly behind the casket draped with the Canadian flag. And in the benches behind them were Flaherty’s three brothers and four sisters, and their spouses and children, a clan more than 50-strong.

In a deeply personal eulogy that the Prime Minister is said to have penned by himself, Harper paid tribute to a colleague and friend with flashes of humour and evident emotion. Flaherty was not just an accomplished minister, he said, helping to steer Canada through troubled economic times, but a “complete package” as a man. Describing a personality who was at once combative and engaging, principled and ruthless, hardheaded and softhearted, Harper marvelled at Flaherty’s capacity to charm his political enemies. “That’s something in this business. I can’t even get my friends to like me,” said the Prime Minister, eliciting a solid laugh from the crowd.

Laureen Harper dabbed at her eyes throughout her husband’s remarks. And Harper himself came close to tears as he finished with some personal thoughts for Flaherty’s sons, now 23. Recalling his own father’s death 11 years ago, the PM said the important takeaway wasn’t the words of tribute or comfort, but the memories of the man. “You are no longer the boys, you are young men. Hold on to your mother. Hold on to your father’s lessons.”

Flaherty’s younger sister, Norah, remembered the guy his siblings called “Jimmy” or “Jimbo,” and whom their mother in later years referred to as “my finance minister.” She related a story about how as a young child he was once caught throwing pennies in the garbage. Asked why, Flaherty said, “because they’re not worth anything.” A prophetic statement, she noted, for a man who would go on to do away with the copper coin decades later in his 2012 budget.

Two of Flaherty’s sons and his wife spoke as well. Quinn recalled his dad’s self-deprecating sense of humour, which often focused on his diminutive stature, and the value his father placed on four pillars: friendship, family, faith and love

“Dad, I love you, we love you,” he concluded. “Put your feet up, lay your head back, close your eyes and relax. We will take it from here.” Galen vowed that their relationship would not be ended by his sudden death, saying his father’s voice will remain forever etched in his memory. Christine Elliott read out a traditional Irish eulogy. “Death is nothing at all. It does not count. I have only slipped away to the next room. Nothing has changed.” On their way back to their seats, they all paused to lay a hand on the coffin.

The service marked the conclusion of an extraordinary week of public remembrance. The House of Commons ceased its business amid genuine displays of grief from all parties when news of his death broke. Then the general public came to pay tribute, lining up in great number to sign an official book of condolences in Ottawa, and attend the visitation at a community centre Flaherty had helped build in his home riding of Whitby, Ont. And as the funeral cortege made its way from the suburbs to downtown Toronto, tracing some of Canada’s busiest highways, vehicles on both sides of the road pulled to the side and stopped to watch in a sign of respect.

Although, some of Flaherty’s fellow politicians didn’t always prove as adept at showing the proper decorum. When Toronto Mayor Rob Ford arrived to pay tribute to his longtime family friend—his father Doug Sr. and Flaherty served in the Mike Harris Ontario government—it had a carnival air. “There’s my boy!” a middle-aged black woman shouted as she captured video with her phone. “I have a t-shirt for you, Rob!” offered another male fan. Ford, accompanied by his wife Renata, bulled his way through a crowd of television cameras with the help of his bodyguard. “It’s a sad day,” was his only comment. John Tory, one of the challengers for his job, obliged a passerby by posing for a quick selfie before he went to the cameras to express his sorrow.

And after arriving early to secure seats, many of the attendees took time to check their email, or even advertise their presence via Twitter. “Beautiful St. James Cathedral in Toronto packed with who’s who waiting for service for Jim Flaherty. Will be moving. #cdnpoli #JimFlaherty,” Tory MP Laurie Hawn told his 3,200 followers. Ontario Progressive Conservative MPP Bob Bailey—the opposition critic for Oil, Gas and Aggregates—shared a blurry photo of the backs of heads and the vaulted cathedral ceiling. And at least two of his caucus colleagues followed suit.

One suspects, however, that Flaherty would have understood. For almost 20 years, he embraced a “public life,” where nights and weekends were rarely his own, and summers were as much about fundraising barbecues as holidays. But his friends and family say he felt all the sacrifice, not to mention the constant campaigning, was part and parcel of community service–a much greater calling.

And in the end, it seems many Canadians saw things the same way. As nine red-serge-clad RCMP officers carried Flaherty’s casket from the cathedral, the crowd of several hundred waiting outside on the sidewalk burst into applause. It was a final goodbye, and an all-too-rare show of respect.