Mineral samples, dinosaurs and polar bears all stand in the Canadian Museum of Nature as totems for a meeting between the PM and premiers on climate change 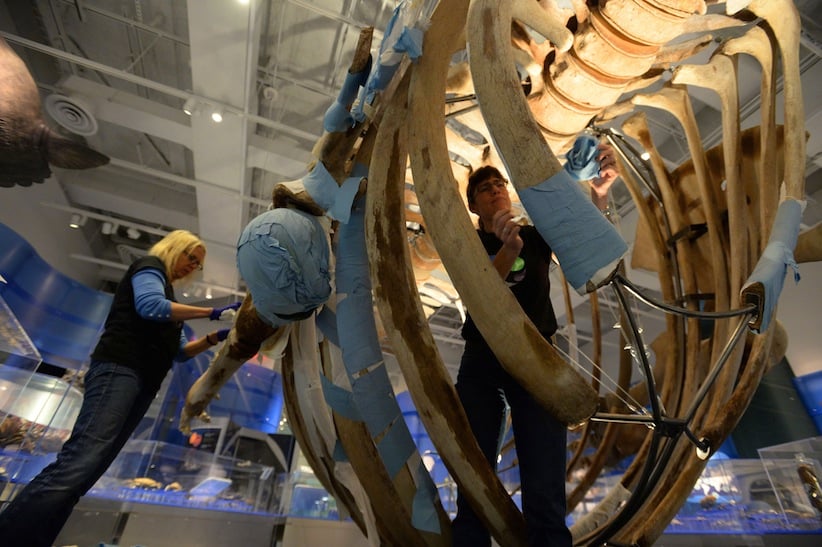 Conservators Carolyn Leckie, right, and Luci Cipera remove poultices with ammonia as they clean the skeleton of a Blue Whale during the Canadian Museum of Nature’s annual cleaning week in Ottawa on Wednesday, January 7, 2015. (Sean Kilpatrick/CP)

Others have remarked on the appropriateness of the Canadian Museum of Nature as the venue for Prime Minister Justin Trudeau’s meeting this evening with the premiers, and they may not realize how true that is.

They might be thinking, since combating global warming dominates the meeting’s agenda, of exhibits like the museum’s life-sized diorama of a stuffed polar bear, poised, massive paw outstretched, above a hole in the faux ice. (Like generations of Ottawa parents visiting with their kids, I’ve worked up a cheerful, equivocating patter regarding the likely fate of the seal in this frozen moment of nature’s drama.)

But, along with being a wonderful place to contemplate Canada’s environment, especially the Arctic, which is of course so vulnerable to climate change, the museum isn’t detached from the Canadian economic landscape. Its rocks and minerals exhibit is sponsored by Vale, the Brazilian mining giant that bought Inco back in 2006, while the dinosaur gallery is brought to us by Talisman Energy.

So Canada’s extractive industries, to use the term that always sounds a bit too much to me like mass-scale dentistry, have their stake in the castle-like building where Trudeau and the premiers are gathering. Not that they would need any reminding of how taking wealth out of the ground can never be ignored when it comes to climate change policy.

Alberta Premier Rachel Notley highlighted that reality yesterday by announcing a suite of measures to combat global warming, including a carbon tax, an end to coal-fired electricity, and a cap on greenhouse gas emissions (eventually) from her province’s internationally infamous oil sands.

Notley’s framework was greeted as landmark policy by industry and environmentalists alike. Still, it raises nagging questions. The expert panel report that underpins her approach suggests the policy mix she proposes is only enough to stabilize Alberta’s emissions at just above current levels, around 270 megatonnes a year, by 2030. That’s a problem, since the new Liberal government in Ottawa has said cutting Canada’s emissions to 30 per cent below 2005 levels, the commitment made by the former Conservative government, will be the minimum national target.

In other words, the feds want Canada as a whole to go much further on emissions cuts than Alberta’s new policy takes the province, at least so far. That doesn’t trouble Simon Dyer, regional director for Alberta and the North at the Pembina Institute, which advocates for environmentally responsible energy development. “We need to look at comparable targets, but we also need to look at comparable effort,” Dwyer told me. “Because of Alberta’s very greenhouse gas-intensive industry, the amount of effort that would be required from Alberta to reduce emissions, compared to other jurisdictions, would be more significant.”

Then there’s the international perspective. That panel report advises that Alberta must remain mindful of foreign competitors. “We’ve concluded that, while Alberta must be prepared to increase the stringency of its policies if others act, the policy package we have proposed is the most stringent approach we could recommend in the absence of that action,” it says.

That sounds not unlike the message former prime minister Stephen Harper used to try to get across by inveighing against “unilateral regulation” of oil and gas emissions in Canada. Notley drew solid support, though, from Quebec Premier Philippe Couillard and Ontario Premier Kathleen Wynne, among others, for taking the lead.

It’s hard to guess how long the sense of amity among the premiers will last. I doubt other provinces would placidly accept being asked to make much deeper cuts in their emissions than Alberta, and presumably other provinces with resource-intensive economies, to allow Canada to achieve a federal emissions-reduction target. Or, perhaps, that would be accepted if federal incentives are more generous where deeper cuts are demanded.

That sort of tough bargaining hasn’t yet begun, but is surely coming. “There will have to be a discussion about money,” Wynne told reporters today. “And what we will have to settle on is how do we make sure we have the biggest impact for those dollars that are invested. And that will be a conversation that has to happen across all of our jurisdictions.”

Will premiers acquiesce to Ottawa’s leadership, if that includes deciding what levels of emissions cuts are sufficient on their turf and how federal money is divvied up among them? Couillard, for one, didn’t seem to be envisioning that sort of tough decision-making today, when he said the Canadian way was to allow each province to “choose what we want to do and how we want to approach a given problem under the same values and the same fundamentals.”

Over in the Vale gallery, the mineral samples glint with the promise of big money underfoot. The dinosaurs in Talisman Energy Fossil Gallery make you think about fierce and remorseless competition. And that polar bear stands on ice that, unrealistically, hasn’t thinned at all over the years.