A Liberal small-business tax maverick basks in the moment 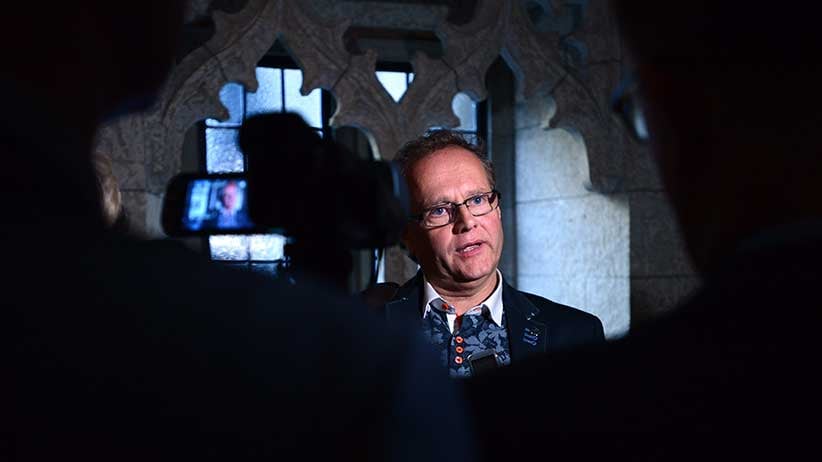 Most Liberal MPs paused only briefly as they left a special caucus meeting on Parliament Hill this morning, offering reporters variations on the approved message that they were satisfied with what embattled Finance Minister Bill Morneau had just told them, behind closed doors, about revising his small-business tax reform plan.

But Wayne Long, the rookie MP for the New Brunswick riding of Saint John-Rothesay, was more than willing to linger. While quite a few Liberals have been grumbling for weeks about Morneau’s controversial plan to tighten tax rules for professionals, entrepreneurs and farmers, Long has come closest to outright rebellion over the proposals.

READ: Justin Trudeau’s money pit, and those working hard to join it

Minutes after Morneau strode out of the meeting—ignoring shouted questions about why he hasn’t put his own extensive business holdings in a blind trust—Long held forth on what he clearly felt was his moment to savour. “I think for the first time in a long time it was a—what would you call it?—a collaborative tone in caucus, where we were part of it,” he said.

By “we,” he meant backbench MPs who have been weathering a storm of outrage in their ridings from small-business owners who don’t want to pay higher taxes. “I know the minister mentioned several MPs in the room that he thanked for their contributions and their advocacy,” Long said.

Asked if he was among those whose input Morneau acknowledged, Long smiled and said simply, “No.” He has made himself a highly visible nuisance to Liberal leadership, particularly by voting in favour of a Conservative motion in the House to extend consultations on the small-business tax reforms, and they kicked him off a couple of House committees as punishment.

Taking that sort of political risk is unusual in Canada’s Parliament, where party discipline is rarely challenged in any serious, public way. Long suggested his own frustration is a symptom of a much wider problem—an unhealthy gap between Liberal backbenchers’ political instincts and the sort of policy thinking that emanates from the well-staffed offices of the Prime Minister and top cabinet ministers.

Long was president of the Saint John Sea Dogs, a junior hockey franchise, before entering politics for the 2015 election, and he unsurprisingly relied on a sports parallel to describe the Liberal caucus dynamic. “I always go back to my hockey analogies in tough times,” he said. “Teams win when the third and fourth lines contribute, have a role to play, and most importantly feel that they are part of the team.”

This week, Prime Minister Justin Trudeau evidently means to try to ease the jitters of his third and fourth lines by making a string of announcements designed to seize control of the small-business tax narrative. “We’ve got a big week of roll-outs,” he said before the special caucus meeting. “I’m looking forward to it.” That message orchestration starts in Stouffville, Ont., where he was reportedly set to announce a small business tax cut shortly before noon, effectively returning to a 2015 election promise then failed to deliver on in the government’s first two budgets.

After that, Long and other MPs said they expect adjustments on all three aspects of the tax reform package Morneau floated back in July: preventing small businesses owners from splitting income with family members who neither invested in the company nor work in it; making it harder for firms to turn what’s really income into lower-taxed capital gains; and he hiking the tax paid on so-called “passive income” small businesses earn from investing in things like mutual funds or bonds.

Morneau’s ability to carry the message about the government’s sensitivity to small business is, however, in doubt. The way he managed his own transition from big business to politics is increasingly under scrutiny, after reports that he took two years to disclose details surrounding his ownership of a vacation house in France, and has not put his massive business interests in a blind trust.

Still, when asked about Morneau, Long defended him. “I think he’s done many, many great things as finance minister,” he said. “Look at our economy, look at the growth in our economy. Look at the progressive things we’ve coming forward with—the Canada Child Benefit, the middle-class tax cut, the investments in affordable housing, the investments in early learning.”

It sounded like the scrappy voice of dissent turning magnanimous in a moment of victory.