'Each of us should contemplate Jim Flaherty's example' 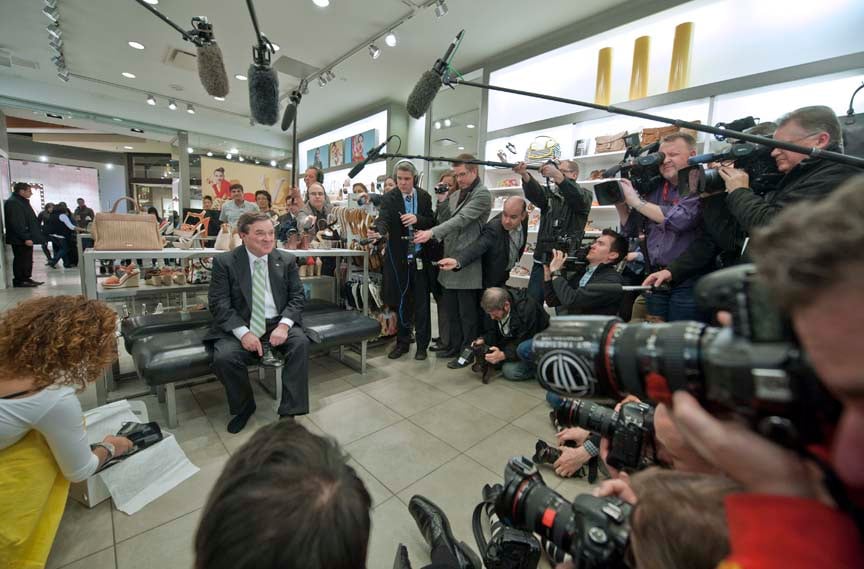 Canadian Finance Minister Jim Flaherty speaks to the press as he tries on new shoes as he shops in Ottawa on March 28, 2012. (Rogerio Barbosa/AFP/Getty)

It will often be said over the next few days that they don’t make politicians like Jim Flaherty any more, but come on: when did they ever?

In 2002 Mike Harris stepped down as leader of Ontario’s Progressive Conservative party and opened his succession to an array of singularly bloodless potential successors: Ernie Eves, Elizabeth Witmer, Chris Stockwell. Tony Clement for fun. And Jim Flaherty, a smirky leprechaun like an Irish cop from central casting. He wanted to jail the homeless. He sent a Queen’s freshman dressed as a waffle to bedevil Eves on the campaign trail. He read his campaign speeches from Teleprompters, exotic behaviour in those simple times. Covering him, I thought Christmas for pundits must have come early.

It was so easy to see why Mike Harris had promoted him so aggressively in the departing premier’s last months in office. Winners can spot winners. “I believe him to be the most formidable new political talent to rise in Canadian public life in the last decade or so,” I wrote of Flaherty in the National Post on the morning of the leadership vote, “and I believe his party is about to make a mistake it will pay for with all its toys.”

Related:
John Geddes: Flaherty’s toughness was real, but not the whole story
Aaron Wherry: A death in the family
Former finance minister Jim Flaherty dead at 64
Jim Flaherty: A life in photos
How the financial crisis defined Flaherty’s legacy

“I’ve never understood,” a Liberal who worked for Dalton McGuinty told me later, “How it is that a Queen’s Park gallery full of reporters could have thought Eves was the second coming. And then you wandered in from Ottawa and saw what we saw. Jim Flaherty terrified us.”

He won 38 per cent of second-ballot votes that year, and 46 per cent in 2004, after Eves lost and it was John Tory’s turn to be Ontario Conservatism’s great moderate hope. By 2006 he had given up on Ontario politics and joined Stephen Harper’s federal Conservative insurgency.

He would never be entirely comfortable being somebody’s lieutenant, even somebody as forceful and successful as Harper. Flaherty was uncomfortable taking orders. During the short period after he stopped being a factor in Toronto and before he became a big deal in Ottawa, I sat at the table next to his at the back of the annual Public Policy Forum dinner in Toronto. The PPF dinner is one of the Canadian elite’s obligatory events, a long testimonial gathering at the Metro Toronto Convention Centre in which the worthiest of public-service worthies are flattered in batches of four—Mel Cappe! Phil Fontaine! Bob Rae! Chaviva Hosek! On this particular occasion, however, the proceedings were leavened, for anyone sitting within 40 feet of Jim Flaherty, by his wicked, sotto voce and deeply funny heckling of every single Great Canadian who popped his or her head above the podium.

He was on better behaviour when he got to Ottawa, but really not much. He simply had no interest in obeying others’ ideas of proper decorum. In a capital full of trimmers and dissemblers, the little vortex of anarchy around the Finance Minister remained consistently satisfying. He kept an eye on Ontario politics, where his wife Christine Elliott remains active, and when an occasion arose to decry the McGuinty Liberals’ performance he rarely let it pass. He viewed every second question from reporters as a chance to crack wise, and he made a great show of taking his time while he did it.

He was brilliant at telegraphing disagreement with Harper, without letting it degenerate into open revolt. When he had been finance minister for a year I interviewed him in the penthouse Toronto Finance District office reserved for Ontario ministers when they’re not in Ottawa. The government was preparing to “solve the fiscal imbalance” by transferring billions to the provinces. It was Flaherty’s job to make sure the books balanced after that bit of Kabuki theatre was done, and he made it clear to me that he didn’t want to give away the store. This government was “the first federal government in Canadian history to acknowledge” the existence of a fiscal imbalance, he said. He paused a beat. Then: “There’s a good deal of debate about how large it is, you know.” Then he roared with laughter at that subtle bit of editorializing.

But no minister gets the reputation Flaherty enjoyed merely by being an expert heckler and telegrapher of distance from the boss. When Harper wrote an ambush on political party financing into the 2008 fall economic update, it was Flaherty who stoically took the criticism for the uproar that followed, uproar he had done nothing to provoke. And after Harper survived the coalition crisis his own tactical blunder had provoked, it fell to Flaherty to deliver the economic stimulus the moment required. Later even auditor-general Sheila Fraser complimented the government on the care with which it disbursed billions of dollars in quick spending. Flaherty’s stock in international finance circles rose commensurately. He became the surest guarantor of the Harper government’s key electoral asset, its relative credibility as a steward of the economy.

We spend endless hours in Ottawa debating the strange phenomenon of MPs sinking ever further into anonymity, pusillanimity and risk aversion. Optimistic colleagues while away the hours imagining some structural reform that would transform MPs into men and women of ideas and innovations. And there may be room for such reforms, but in the end, it all comes down to the same question each of us faces in our lives: Are you going to live in fear, or are you going to live? Jim Flaherty was more alive than the next half-dozen politicians and assorted Hill denizens put together. That’s why his death leaves such a shocking emptiness behind. Each of us should contemplate his example.