A military man breaches the gates at Rideau Hall

Politics Insider for July 3: An armed man drives a truck past Rideau Hall's gates, the feds buy a new ferry and the $900-million WE contract raises even more questions 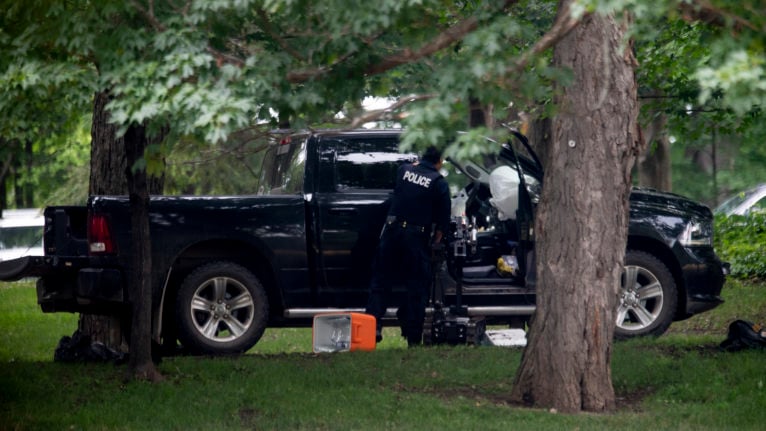 An RCMP police officer looks in the cab of a pickup truck on the grounds of Rideau Hall in Ottawa, Thursday July 2, 2020. (Adrian Wyld)

Ottawa’s New Edinburgh neighbourhood is firmly rooted in the century before last. It’s the kind of place where every street sign doubles as a plaque with a history lesson. Its founder, Thomas McKay, left his fingerprints everywhere. Even his son-in-law, Keefer, merited his own street. MacKay Street, named after Thomas but with a different spelling, forms part of the perimeter of the Rideau Hall grounds (some of which are normally open to the public). The stately fence does not seem to make security an obvious priority. Most signage simply tells snow plows to avoid dumping the heavy stuff against aging exterior walls.

A closer look does reveal signs that important people live on the grounds. The perimeter of Rideau Cottage, home to the Trudeaus, is surrounded by a much more substantial fence. It’s close enough to the rest of the neighbourhood that on a quiet day—most days are quiet in this part of town—nearby residents might even hear the Trudeau kids shooting hoops.

Yesterday brought a flurry of activity to the area, though neither the Trudeaus nor Governor General Julie Payette were home at the time. Just off MacKay Street, near Rideau Hall’s main entrance, an armed man drove a black Dodge Ram past a secondary gate—this is how it looks on a typical day—and onto the grounds at around 6:40 a.m. Mounties apprehended him a little ways down a winding road, forested road. Ottawa Citizen photographer Tony Caldwell pulled out a powerful lens that spotted a few items in the truck, including what might have been Canadian Armed Forces rations.

The Citizen was the first to have sources saying the driver was a military man, which Defence Minister Harjit Sajjan‘s office confirmed. CBC News later reported the man, whom they named as Corey Hurren, was a reservist with the Canadian Rangers, and his vehicle was adorned with a Manitoba licence plate. The Toronto Star added that Hurren owns a sausage-making company that hit hard times during the pandemic—and he “appears to have posted” a COVID-19 conspiracy theory on Facebook minutes before finding his way onto the Rideau Hall grounds.

A bad news WEek: More and more people are wondering if something seems a little off about the $900-million student service grant the feds outsourced to the WE Charity. Just before Canada Day, CBC News reported that some teachers will be paid $12,000 to recruit students to the program. On July 1, the Globe and Mail reported that WE, which the feds claim was the only organization able to administer the program, would itself be offering 450 student-volunteer placements funded by the grant program. Now, three Tory MPs want the federal procurement ombudsman to investigate five other contracts awarded to WE since 2017. The charity also endured organizational upheaval earlier this year.

Early yesterday, the long legal tussle over the Trans Mountain pipeline reached another milestone. The Supreme Court declined to hear an appeal from First Nations that hoped to quash the project. The top court was likely the last resort for the pipeline opponents, but they claimed to have remaining legal options.

Canada’s energy regulator has a new top dog. Gitane De Silva‘s last government gig was in Washington, D.C., where former Alberta premier Rachel Notley had appointed her the province’s trade representative. (That role is now filled by James Rajotte, a former federal caucusmate of Premier Jason Kenney.) De Silva was once Alberta’s deputy minister of international and intergovernmental relations, and served a decade-long stint as a foreign service officer—including a posting as Canada’s top diplomat in Chicago. For the past several months, she was as a special advisor at TransAlta.

Ottawa needs to replace a 39-year-old ferry, MV Madeleine, which carries passengers and their cars between Souris, P.E.I., and the Magdalen Islands in the middle of the Gulf of St. Lawrence. But its replacement, named MV Jean Lapierre after the former cabinet minster who died in a 2016 plane crash near Îles-de-la-Madeleine Airport, won’t be ready until at least 2026. So the feds bought Villa de Teror, a ferry that services the Canary Islands, as a stop-gap. It’s still chugging along overseas (track its current position here). Villa de Teror has its own choppy procurement history. Viking Lines had ordered it up, but cancelled the contract when the Spanish shipbuilder failed to deliver on time.

Flight PS752: Sweden’s foreign minister, Ann Linde, said Iran has agreed to compensate families of the 176 victims—including 57 Canadians—of an Iranian missile attack that brought down the Ukraine International Airlines 737 aircraft in January. A federal backgrounder only says the five nations that lost citizens are jointly demanding reparations, and appointed Ukraine as “negotiating spokesperson.”