A new 338Canada projection has the Tories safely in majority territory

Philippe J. Fournier: The latest electoral model has the Conservatives winning 174 seats, while the Liberals face big losses in Ontario and Atlantic Canada 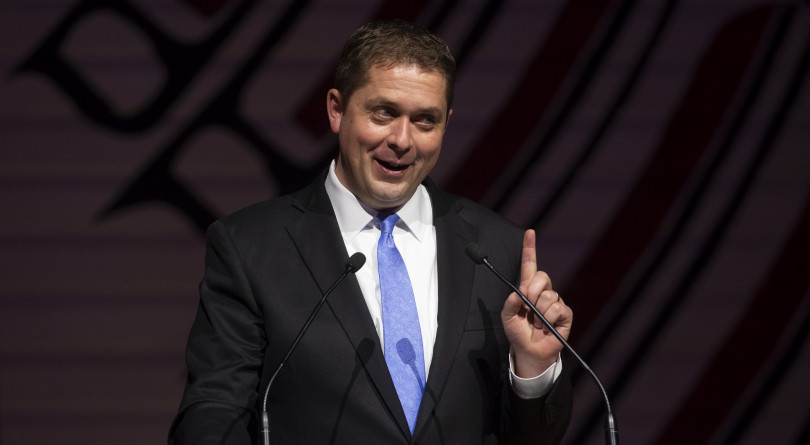 Scheer jokes during his speech at the annual Press Gallery dinner in Gatineau, Que., on Saturday, May 4, 2019. (THE CANADIAN PRESS/Adrian Wyld)

Since Ottawa was hit by the SNC-Lavalin storm in early February, a staggering number of opinion polls have been conducted. Data nerds like myself are not complaining, but so many polls taken when public opinion is in flux creates a fair amount of noise—which may lead to considerable confusion for voters.

Case in point: polls in the past month alone have ranged from 13 point CPC leads (Angus Reid, Léger) to a 4 point LPC lead (Innovative Research), with other polling firms somewhere in the middle (namely: Ipsos, Nanos and Campaign Research). Obviously, not all these polls can be correct in the same time frame, but it’s by taking them all together and careful weighing the regional breakdowns that we can hope to reduce the noise and see the actual data.

Here are the federal polls published since the end of 2018: 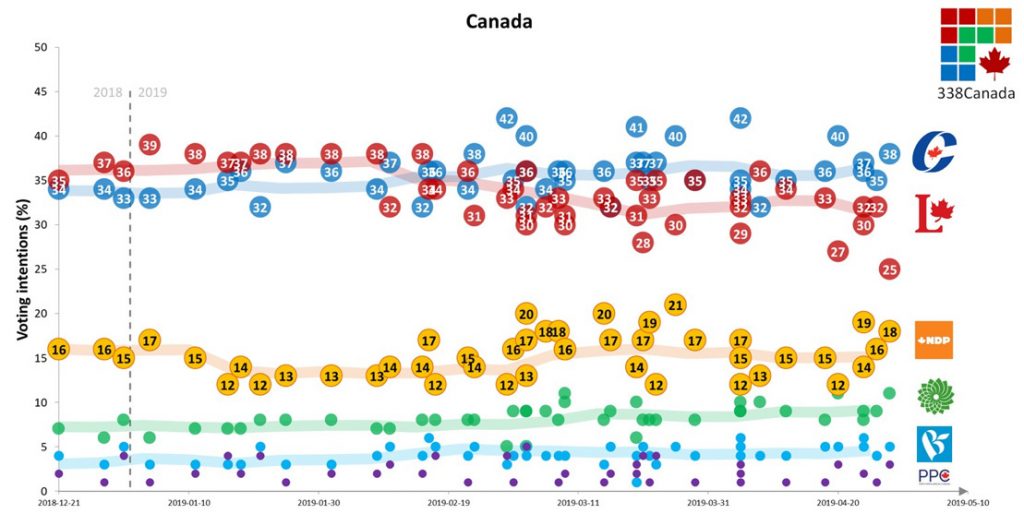 The complete list of all federal polls can be found on this page.

To calculate the following 338 projection, polls are carefully weighted by field date, sample size, and broken down per region of the country. The 338 model also includes demographic data from the Canadian census in its simulations to link the movement of public opinion per electoral district. Historical data of past elections is also taken consideration in the model. Details of the 338 methodology and past performance of the model can be found here.

Readers should know that this is not a prediction of the outcome of the next election, but rather a projection of where the major parties stand according to current data. When/if the data changes, the projection then adjusts itself.

With 169 days until the federal election, here is the 338Canada electoral projection for May 5th 2019.

The Conservative Party of Canada leads the way with an average support of 36.6 per cent nationally (the projection 95 per cent confidence intervals are indicated on the graph below). Although federal voting intentions appeared to show a tightening gap between the CPC and LPC in the past weeks (coinciding with the SNC-Lavalin saga fading out of the news cycle), the latest polls published in the past days have propelled the CPC alone in first place. 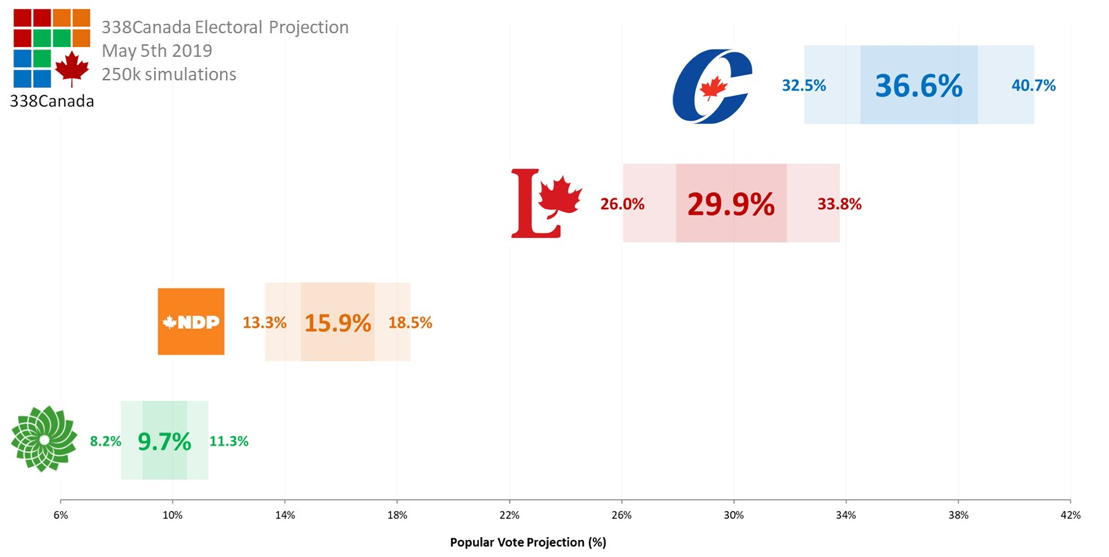 The Liberal Party of Canada falls to an average of 29.9 per cent, its lowest level since the 338 tracking began in October 2018. The latest data made available indicates an erosion of support for the LPC from coast to coast—even in Quebec and Atlantic Canada, which both appeared to be Liberal strongholds only months ago.

Even with the Liberals sliding in voting intentions, the New Democratic Party still can’t seem to get any traction. Its average support stands at 15.9 per cent—a level that would most likely mean that many current NDP districts could change colour next fall.

The Green Party of Canada continues its slow, but steady ascent in voting intentions with an average of 9.7 per cent this week. However, as we will see below, this modest hike in public support does not necessarily translate into significant gains in the seat projection.

How do these voting intentions translate into seats? Let’s crunch the numbers.

With such levels of public support, the Conservatives now hold a commanding lead over their rivals in the seat projection. On average, the CPC wins 174 seats per simulation—just above the 170 seat threshold for a majority at the House of Commons. 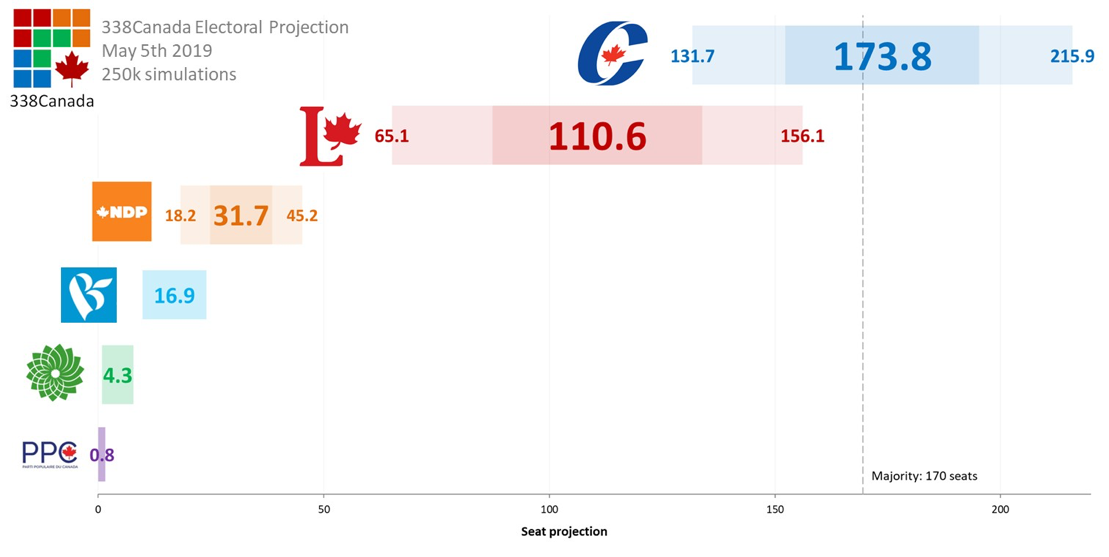 The Liberals fall to an average of only 111 seats, with all but about a dozen seats west of the Ontario-Manitoba border.

Below are the seat projection probability densities for the CPC and LPC. The higher the bars, the more likely the outcome: 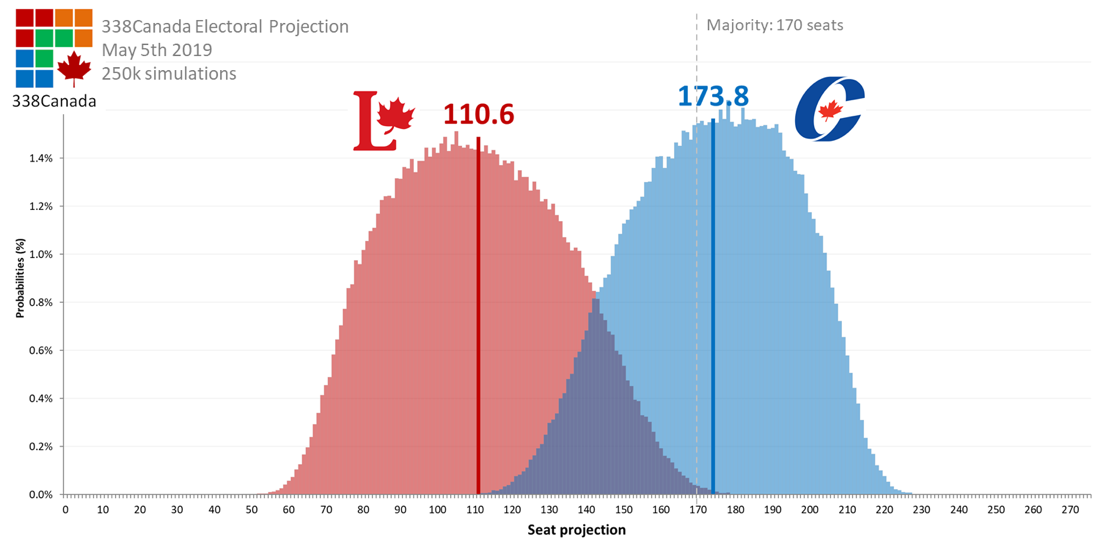 The NDP climbs modestly this week in the seat projection, which is more due to the Liberals’ slide than to a hike in NDP support. On average, the NDP wins 32 seats: 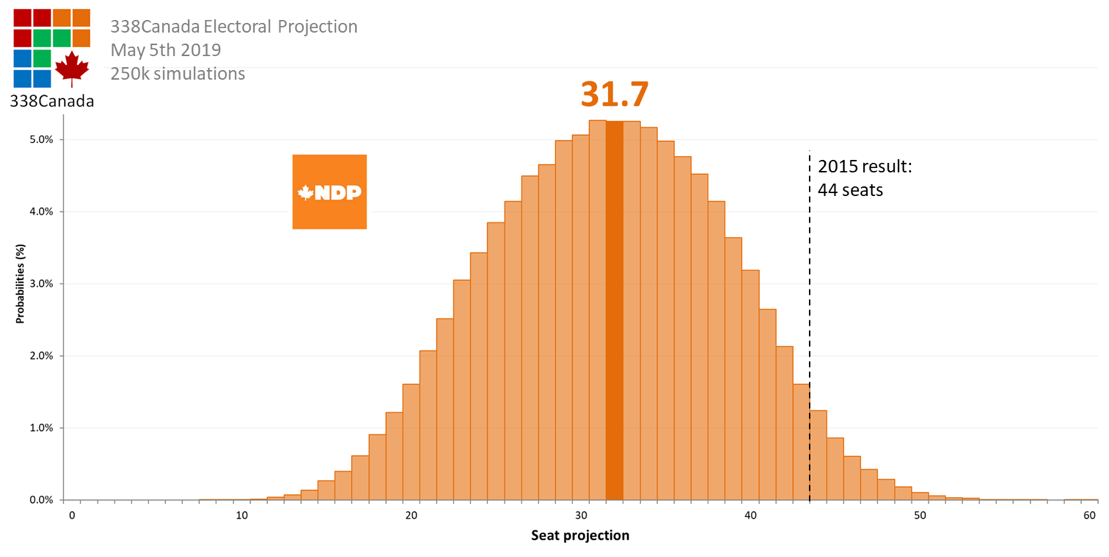 The latest data in Quebec shows a modest, but significant climb for the Bloc québécois. With about 20 per cent of support in Quebec, Yves-François Blanchet’s party wins an average of 17 seats per simulation. 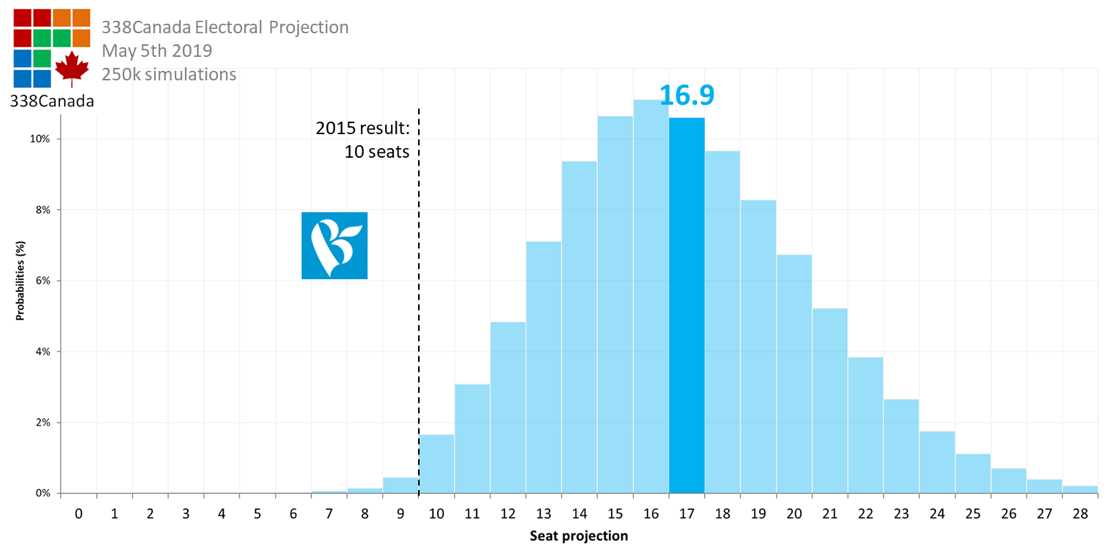 With the data presented above, the 338 model compiles the outcome of 250,000 general election simulations. Since only the Liberals and Conservatives have a shot at winning the most seats (according to current data), we may graph the probability density of the seat total difference between the CPC and LPC (see graph below) and thus evaluate the odds of either party winning the election: 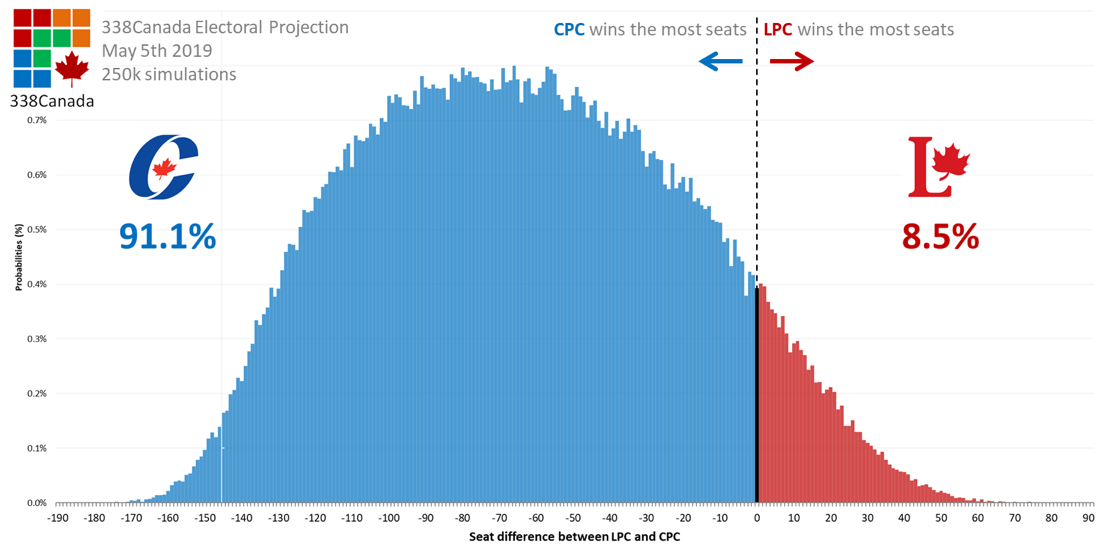 The complete map of the 338 Projection can be found here. 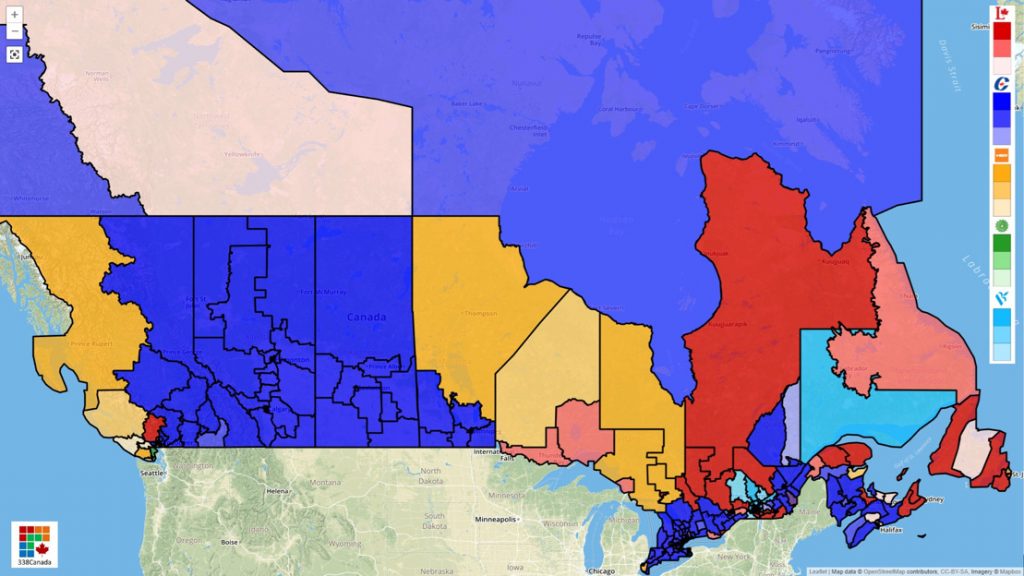 We are still more than five months away from election day, so the Conservatives still have plenty of time to squander this lead. However, in analyzing these numbers and especially the projection map, it is increasingly difficult to see a path towards a second straight majority for the Liberals.

Moreover, with the Bloc at 20 per cent in Quebec and the Greens polling as high as ever in key parts of the country, not only are the Liberals not headed towards a majority, but they could very well be sent back to the opposition benches after a single term in power—as the results of this projection clearly show.

As Paul Wells wrote last week: “Politics isn’t physics, trends aren’t natural laws, and absolutely anything could happen before October”, and as a physicist, I fully concur. But recent provincial elections in Ontario, Quebec and Alberta lead to majority wins by parties that had been leading in the polls several months before election day.

Sometimes, when an electorate has made up its mind, whatever happens in a campaign is nothing but noise.

In hindsight, we understand now that the writing had been on the wall for quite a while for Kathleen Wynne, Philippe Couillard and Rachel Notley. We may just be seeing the same trend at the federal level.

We will see. Polls take snapshots of the present, not the future.

Philippe J. Fournier is the creator of 338Canada.com, Qc125.com, a regular contributor to L’actualité magazine and a professor of physics and astrophysics at Cégep de Saint-Laurent in Montréal. Watch Maclean’s for all his vote projections for the 2019 federal election.