A skeleton crew returns to Parliament to approve billions in spending

Politics Insider for March 24: Some MPs are back in Ottawa for the day, Canada's civics lesson gets real and a pandemic makes strange political bedfellows 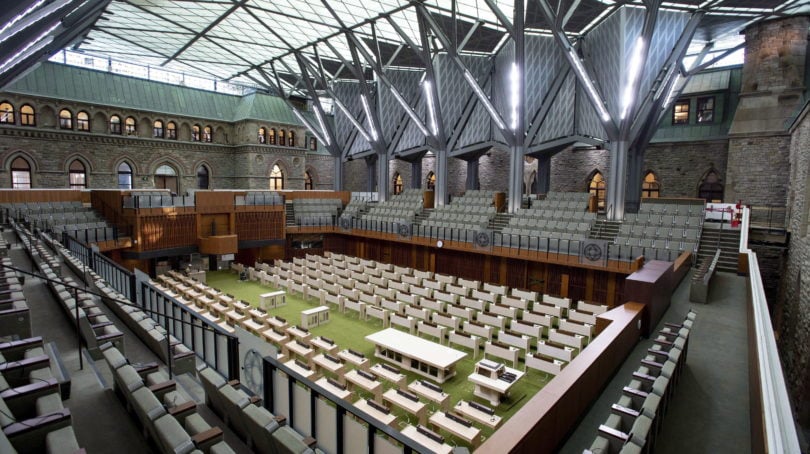 The interim House of Commons Chamber in seen during a media tour of the renovated West Block on Parliament Hill in Ottawa on Friday, June 15, 2018. (Justin Tang/CP)

The House of Commons is back today, and Global News scored a scoop on the emergency-spending bill parliamentarians will debate during their brief, scaled-down recall. The draft bill would reportedly grant Finance Minister Bill Morneau “extraordinary new powers to spend, borrow and tax without having to get the approval of opposition MPs until December 2021.” That’s right: a 21-month stretch with limited accountability, well beyond oft-reported projections of just how long it’ll be before a COVID-19 vaccine is widely available.

Global called the bill’s proposals “highly unusual,” and rightly points out that money bills are particularly sensitive in minority parliaments that live or die on opposition support for spending proposals. Every party had committed to supporting this emergency funding legislation, but the Liberals do only require one dance partner to send it on to the Senate.

In a statement, Andrew Scheer said his Conservatives are ready to pass the measures announced by the Liberals last week, but that support wasn’t unconditional. “We will not give the government unlimited power to raise taxes without a parliamentary vote,” Scheer said. “We will authorize whatever spending measures are justified to respond to the situation, but we will not sign a blank cheque.”

By late last night, after intense opposition (even from a Liberal MP), CTV’s Evan Solomon reported the government was pulling the contentious proposals off the table.

“Enough is enough. Go home and stay home”: Prime Minister Justin Trudeau didn’t lay down the law in his daily press conference yesterday (specifically, the Emergencies Act that carries with it sweeping powers), but he basically stopped asking Canadians to take physical distancing seriously—and outright told them to do it.

Trudeau’s message seemed to be: this isn’t a time for carrots and sticks. But if Canadians don’t listen to warnings, there will be a stick. “We’re going to make sure this happens whether by educating people more on the risks or by enforcing the rules if that’s needed,” he said. “Nothing that could help is off the table.”

The various federal and provincial laws that could force people indoors collectively comprise the latest readings in a nationwide civics class taught at hyperspeed. Philippe Lagassé, a Carleton University professor of both governance and defence policy—a human Venn diagram for this moment—explains that provinces all have their own laws broadly similar to the Emergencies Act, a federal tool that Lagassé called a “coordinating mechanism” for national emergencies.

The PM, as it happens, had a call with the premiers last night to discuss their emergency powers—and whether they were adequate without federal intervention. Perrin Beatty, the president of the Canadian Chamber of Commerce, wrote a letter to the PM last night that urged first ministers to “clearly define essential services, consider all aspects of supply chain and ensure consistent application across Canada.”

The various laws at the disposal of the PM and premiers will, if they’re enacted, curtail our civil liberties. Writing in Maclean’s, Adnan R. Khan says Canadians need to accept such draconian measures in order to beat back the coronavirus.

More freedom for each man, woman and child in our society does not translate into more freedom for our society as a whole. In fact, it can have the opposite effect: freedom, under some circumstances, functions like a resource; the more of it some people have, the less is available for others. We may think the simplest freedoms, like going for walks or grabbing a coffee, should be inviolable, but under such extreme circumstances, even those seemingly innocuous acts of everyday life can have freedom-destroying consequences for others.

Inside Ottawa’s ‘light-speed’ epidemic-driven overhaul: Paul Wells entered the sparsely populated inner sanctum of Jean-Yves Duclos, the president of the Treasury Board and vice-chair of a weeks-old cabinet committee on COVID-19, for an hour-long interview. Duclos, an economist by training whose job in normal times is to closely monitor and restrain government spending, talked at length about the government’s fight and what comes next. He foreshadowed “further restrictions” to come on the already tightened Canada-U.S. border:

Jane Philpott from the coronavirus front lines: Yesterday, Jane Philpott spared a moment to wish her friend Jody Wilson-Raybould a happy 49th birthday. That brief celebration offered a no-doubt welcome respite from her other preoccupation these days: returning to the medical profession, where she’s signed up to work at a coronavirus assessment centre. Philpott writes in Maclean’s about the smartest moves the feds can make—but also reflects on the scale of the crisis unfolding before her eyes.

I am afraid of what lies ahead for humanity. I’ve been a doctor since 1984. I was a medical student when AIDS first appeared. I worked in Niger, West Africa with Médecins Sans Frontières when thousands of children were dying of hunger. I was a family doctor in Stouffville, Ontario when SARS struck. But I’ve never seen a level of alarm among health professionals comparable to what the current crisis has precipitated.

Strange bedfellows: Jagmeet Singh‘s NDP has no business agreeing with Ken Boessenkool‘s plan to save the economy. Recall that Boessenkool, writing in Maclean’s, argued the feds should send a $2,000 cheque to every mailbox in the nation—a distinctly non-targeted solution that doesn’t adjust for low-income families. Boessenkool was a Harper man. The NDP detested Harper. And yet here the party is calling for the very same $2,000 cheques as part of a broader package.