A stumbling Jagmeet Singh could be Justin Trudeau's saviour

Stephen Maher: With Andrew Scheer upping his game, Trudeau will need to try harder to get re-elected and hope the NDP keeps failing 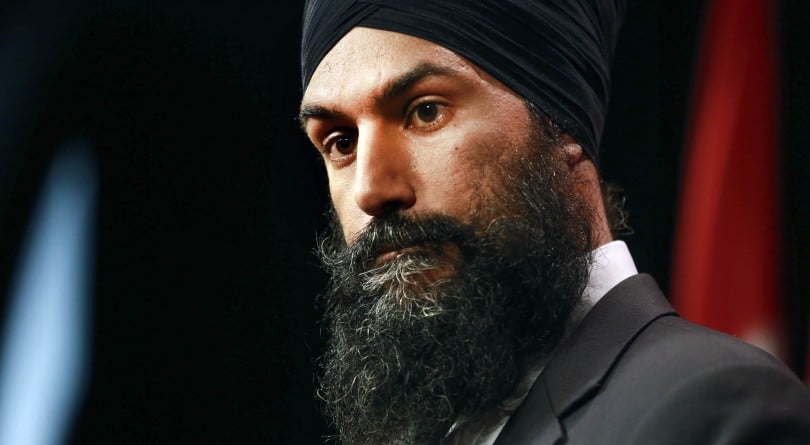 It was good to see NDP MP Charlie Angus up on his feet asking Justin Trudeau nasty questions this week and to watch the prime minister responding blandly to those questions, because it was good to see both teams with their best players on the ice.

Andrew Scheer’s Conservatives have had a great winter, but it has been terrible for the Liberals and NDP, so they can’t afford to leave their talent on the bench.

I took it as a sign of seriousness that Trudeau attended four Question Periods this week, instead of his normal one, willingly doing partisan battle with his tormenters rather than doing yoga, trying on outfits, or whatever it is he does when he is not in the House.

READ MORE: The NDP falls back in line behind a ‘mature’ Jagmeet Singh

Trudeau, who just a few months ago looked like he could win the next election without even campaigning, is now trailing in many polls, the result of a sudden collapse of support after his disastrous passage to India.

It is not unusual for governments to run into trouble at this point in their mandate, and I still think that it is likely that Trudeau will be prime minister after the next election, but only if he smartens up. The fact that he showed up in the House all week is a sign that he knows that.

I was reminded of his last sharp drop in the polls, back in 2015, when Rachel Notley became premier of Alberta and progressive voters, cheered by the defeat of conservatives in their citadel, turned their gaze longingly on Tom Mulcair. Rather than reconciling himself to third-party status, though, Trudeau kept working, and managed to grab the attention of left-leaning voters with a package of democratic reform proposals, including the crucial promise to change the electoral system.

Of course, Trudeau later broke that promise, but the point is that when the going got tough, he was ready to fight.

If he wants to win the next election, he will have to be prepared to fight some more, which will mean parrying attacks about his ill-considered voyages.

More than a month after the Indian trip, he is still busy defending it.

RELATED: The complex history of Sikh trauma will make or break Jagmeet Singh

The Liberals have refused to have national security advisor Daniel Jean testify at committee, where he would face embarrassing questions about why he told journalists that Indian agents may have played a role in the appearance of a failed assassin at a consular event.

The Conservatives, casting themselves as defenders of Parliament, held an all-night voting session to protest Jean’s absence, and it worked out splendidly for them, boosting their morale and irritating the Liberals.

Scheer, in his low-key way, is getting better at his job, and the party that ran the country for the last decade still has a lot of talent, money and support.

Trudeau’s messaging is so earnestly politically correct and feminist that a lot of Liberal-Conservative switchers, especially men, are likely wondering whether the government is interested in them.

The recent rise of populism in Europe and North America is partly a backlash to feminism among economically anxious men. You might wish that such men would calmly accept that we are living in a more equal world, but no amount of lecturing is going to change their minds, and they can vote how they like. It is not clear that the Liberals spend enough time thinking about them.

Whatever its policy merits, the recent female-centric budget took the focus off the party’s election-winning message—the middle class and those working hard to join it—and put it on half the population.

Finance Minister Bill Morneau is a poor communicator, which has put the Liberals on their back foot on key economic issues, which will be the only issues that matter if Donald Trump finds a way to mess up the American economy or the Canadian housing bubble bursts.

In 2019, the Conservatives can campaign as economic managers seeking to get the economy back on track. They can decide how much populist rhetoric to add to the mix after they see how Doug Ford does in Ontario and how François Legault does in Quebec.

The one bright spot for the Liberals, and worry for the Tories, is the NDP.

Angus was on his feet in the House only after a caucus revolt against leader Jagmeet Singh, whose painful contortions around foreseeable questions about Sikh extremism provided the Liberals with a much-appreciated distraction.

Angus, who was defeated by Singh in the leadership race, is the NDP’s best attack dog, but he had been sidelined. Then, after he and other MPs openly objected to the way Singh disciplined veteran David Christopherson, suddenly there Angus was up again, tormenting Trudeau.

Like Trudeau, Singh is a good retail politician, but he has obviously struggled on his learning curve. He has hired inexperienced young people, pushed away veterans, spent little time in Ottawa and, still, six months in, has not got a director of communications. It is not clear that he has correctly identified the challenges he faces.

To win, the Conservatives need those splits. If Singh doesn’t raise his game, they are not going to get them.