Paul Wells: There is a lot of wishful thinking that goes into a decision to remove a leader. There's also the cold reality. 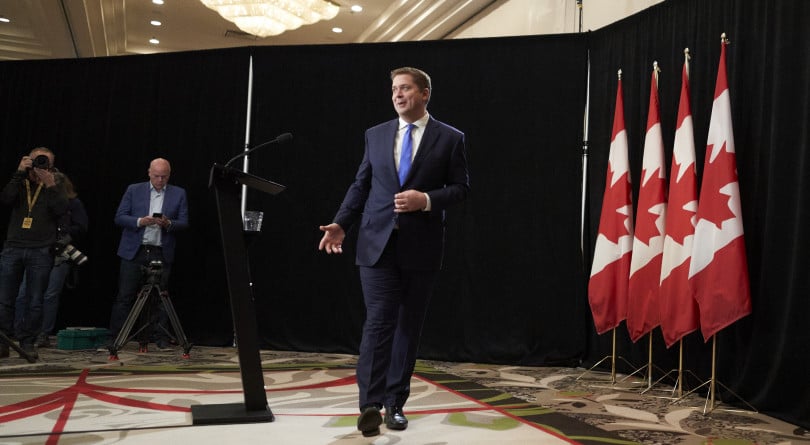 Scheer walks away following a press conference in Regina on Oct. 22, 2019 (GEOFF ROBINS/AFP via Getty Images)

What’s to be done about Andrew Scheer? He’s the most Western-entrenched Conservative leader since—well, since Rona Ambrose, Stephen Harper, Stockwell Day, Preston Manning, Joe Clark and John Diefenbaker. He’s reduced the Conservatives to pariah status in the country’s big eastern cities, terrifying windswept concrete valleys of Laurentianism where gay people are prone to marry or parade without notice. He faces a leadership review vote at his party’s national convention next spring in—shudder—Toronto, and Conservatives are more or less openly discussing their options for a trade-in.

Sure, he gained 26 seats and a million votes over his predecessor Harper’s 2015 score, and he governs the largest opposition caucus, as a fraction of all seats in the Commons, since Pierre Trudeau’s brief turn as an opposition leader in 1979-80. He did win more votes and seats than other recent opposition leaders running their first national campaigns—more than Tom Mulcair in 2015, more than Harper in 2004—and more than Jack Layton did in the “Orange Wave” election of 2011, Layton’s fourth national campaign after three disappointing runs.

What preoccupies some Conservatives is what Scheer didn’t accomplish this time, and what he showed on the way. He ran a curiously passive campaign with a bean-counting message: his government would cost you less than Justin Trudeau’s. Running against a Liberal party with its most overtly values-based message since the Pierre Trudeau years, Scheer didn’t prepare an adequate defence against value attacks or mount a strong argument for a different worldview. He just hoped people wouldn’t ask him about abortion, sexuality, immigration, Indigenous issues or his own life story.

It’s clear now that Scheer’s staff spent the first two years of his leadership telling themselves that only The Liberal Media would ask such pesky questions. The problem is (a) they weren’t wrong about the media—reporters were going to keep asking—but also (b) they should have expected their opponents to ask the same questions. Relentlessly. For every day of the campaign. In that environment, it would have been a good idea to prepare answers.

READ MORE: Jason Kenney slashed the budget—hey, Trudeau made him do it!

Now Conservatives need to decide whether they want Scheer to lead them into the next election. If they do, they may not even want to wait until next April before they start pushing in hopes of getting the guy out sooner. A new leader takes time to get settled; plainly two years was less than either Scheer or Jagmeet Singh could have used. And a minority Parliament is a land of unpredictable timelines. So a decision looms for Conservatives.

I offer them no counsel, only gentle reminders. It’s often a good idea to let a leader stick around after a first disappointing campaign. National campaigns are hard. A first campaign is a good chance to make your mistakes. That’s why Stephen Harper lost on his first attempt, as did Dalton McGuinty and Jean Charest in the two largest provinces. Losing was part of what helped them learn how to win. I mean, the difference between McGuinty’s terrible 1999 campaign and his polished (and cheerfully mendacious—he even signed a Canadian Taxpayers’ Federation Pledge to hold the line on taxes, for goodness’ sake) 2003 sophomore effort is hard to exaggerate. Ejecting a leader after that first defeat is often a good way to find another rookie who’ll then make brand-new mistakes, as the federal Liberals discovered when they replaced Stéphane Dion with Michael Ignatieff.

Arguably an even clearer recent case is the NDP, who took the second-best performance in the history of the party—Tom Mulcair’s in 2015—as a debacle, and voted to remove Mulcair before they’d begun to consider who might be available to replace him. They wound up with Jagmeet Singh, who managed to hold just over half of Mulcair’s seats. But even then, I wonder how much better Mulcair would fare if the leadership review were held again. Sometimes what determines a party’s decision is simply whether they feel right with the leader they have, and in Mulcair’s case it may have had less to do with results than with the leader’s personality, style and political philosophy.

Which is another way of saying, the answers to leadership questions are never obvious. Conservatives wondering whether to keep Scheer need to decide whether the weaknesses he displayed can be fixed, and whether the realistic alternatives are more attractive.

The weaknesses include lousy electoral performance in big cities; evident discomfort with discussing his own religious beliefs in a political context; a campaign that lacked an argument more compelling than a grocery bill; and the odd decision to focus so much attention and so many resources on the leader instead of on a broader Conservative team. The Conservative campaign seemed as much a cult of personality as the Liberals’ or the NDP’s, except that those latter parties’ leaders have personalities.

I won’t score Scheer in detail on the points I just listed. This is a game you can play at home. I will say that much of the list seems fixable. But I know Conservatives who cannot understand why their leader won’t show up at a Pride parade somewhere. It’s hard to write it off as a generalized antipathy for parades, given that it’s easy to find photos of Scheer at parades for Acadians, Sikhs and Portuguese-Canadians. Maybe he could ease into it, start with an Acadian Pride parade or something. Or maybe his evident hangup should in itself be disqualifying. Your call, Conservatives.

As for alternatives, I don’t want to badmouth every potential leadership candidate the Conservatives have. But I will say it’s hardly unheard of for a party to prefer “anybody else” right up until that’s who they get. My first Maclean’s column, in 2003, was an interview with Peter MacKay several days before he became the last leader of the Progressive Conservative Party. It was one of those terribly unfair columns where I just let the candidate talk. MacKay has had 16 years to learn since then, and maybe he’d be better next time! But Conservatives will want to be sure before they take the gamble, and they’ll want to remind themselves that not only did Scheer beat most of the likely other candidates to lead the party in 2017—so did Maxime Bernier.

If I were a partisan, I’d remind myself how much wishful thinking goes into the decision to remove a leader. And how often that wishful thinking is dashed by cold reality. What I do know is that there are Conservatives who like Scheer who hope he’ll move quickly to show he’s learned concrete, applicable lessons from the 2019 campaign. A leader who learns is easier to stick with.