After Keystone XL: Where Canada goes from here

Let's face it, Keystone XL was already doomed. Obama's decision lets all players hit the reset button and find the winning conditions for other pipelines 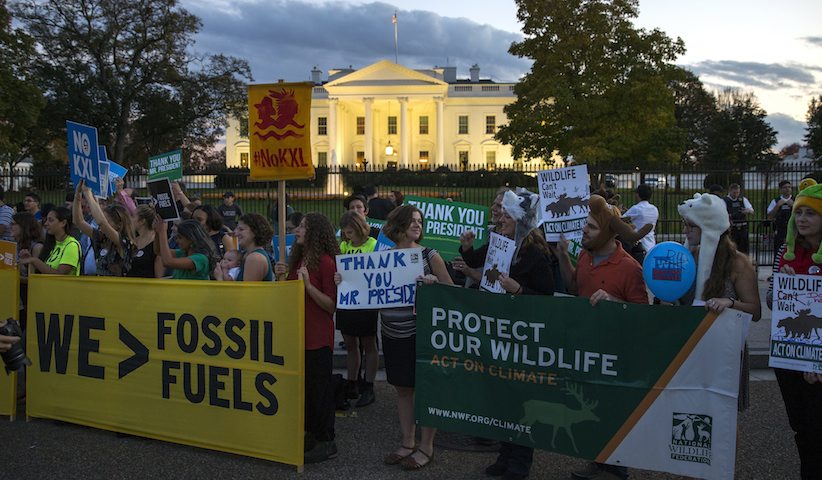 But there was not much surprise in the White House’s bad-news Friday announcement. TransCanada’s eleventh-hour bid for a stay of execution, and Washington’s quick dismissal of that bid, only made the decision appear more imminent and gloomy.

But while some in Canada cried over the politics of it all—and the hypocrisy, given the 3.9 million daily barrels of oil that currently flow south of the border—Obama’s decision does let all players hit the reset button and try with success on other pipeline projects, as well as another bid for an expansion of the energy sector’s southbound capacity.

Notley was never a fan of Keystone XL, echoing federal NDP Leader Tom Mulcair’s fears that exporting more raw bitumen would kill Canadian jobs. (Just ask Canadian ranchers how dreadful for their livelihoods it has been to ship live Alberta cattle to U.S. slaughterhouses, and perhaps ask the province’s leaders if they oppose that, too.) The elimination of Keystone XL from contention means the premier and the new Prime Minister are in lockstep on the remaining pipeline projects, all domestic matters that won’t be subject to Democratic or Republican impulses. Notley and Trudeau are both provisional supporters of TransCanada’s Energy East pipeline to Quebec and New Brunswick, and Kinder Morgan’s expansion of its existing Trans Mountain line to the south B.C. coast; neither are cheerleaders for Enbridge’s Northern Gateway line, and Trudeau’s proposed tanker ban off the north B.C. coast dooms that venture.

As some of those negotiations on oil shipments to the much-needed non-U.S. markets work their way through the system—National Energy Board begins hearings on Trans Mountain are slated for December—there will also come time, sooner rather than later, for TransCanada or another industry player to try breaching the 49th parallel again, with a pipeline that’s a vastly safer and more affordable alternative to expanding rail shipments. And while Trudeau and Western Canadians might be loath to take inspiration from a separatist, it’s time to ponder the sort of “winning conditions” that former Quebec premier Lucien Bouchard identified in hopes of bringing about his dream.

Here are five such conditions, one already met:

Someone new in 24 Sussex: Obama found little trouble saying no to the project Harper called a “no-brainer.” Conservative officials mostly irritated Washington officials when they flew down to hector them. Who knew that stubborn insistence would make a lousy negotiating tactic?

As the President announced his rejection of Keystone XL, he also said he looks forward to collaborating with Canada’s new Prime Minister on climate change policies.

Someone new in 1600 Pennsylvania: TransCanada had hoped to delay its Keystone XL application until after next November’s presidential election. On the Republican side, everybody from Jeb Bush and Marco Rubio to Donald Trump and Ben Carson would sign another Keystone application with little hesitation. All of the Democrats declared they would reject it, including past supporter Hillary Clinton.

But if Canada brought forth a new application under different terms, Clinton could well revert to backing a bitumen line to U.S. refineries, says Chris Sands, senior fellow at the Washington-based Hudson institute. “At least it gives her the opening if she chooses,” he says. An early-term Clinton won’t be as legacy-minded as Obama. With his latest carbon reductions strategy facing legal challenges from companies and 24 states, the lame-duck President needed some convenient scalp like Keystone XL to show the greens ahead of the Paris climate change conference, Sands said. “This became the consolation prize, the Rice-a-Roni ‘thanks for playing’ gift the environmentalists wanted.”

Buffing the “dirty” oil: Although the Harper government offered minimal environmental concessions to persuade Obama, TransCanada tried to brandish and promote what measures and targets the former prime minister had set—and they also fired off a letter touting the Alberta government’s carbon emissions levy increase shortly after Notley’s environment minister had announced their first steps. The NDP government is set to announce a further toughening of its carbon regulations within weeks, ahead of Notley’s conference trip to Paris. The federal government will likely nod in accordance, giving lobbyists for TransCanada and other companies much more to crow about when officials ask about the oil sands’ dirtiness. Energy corporations are also working on this; even Royal Dutch Shell’s CEO on Friday tied the U.S. rejection to public frustration over the failure to reduce greenhouse gas emissions.

“It has improved, is improving, and at some point, the carbon footprint of the oil sands will be equal to or better than the imported oil that’s coming from Saudi Arabia, Kuwait, increasingly from Iran, Venezuela and Mexico,” said Robert Skinner, a former Statoil executive, and an executive fellow and University of Calgary’s School of Public Policy.

A new path: TransCanada launched its Keystone XL bid back in 2008 as a differently routed addition to its existing Keystone 590,000-barrel-a-day pipeline system, blissfully unaware that environmentalists would use that pipeline to foster a massive proxy war against the oil sands. Skinner suggests the company will dust off some of its old blueprints to find a new way to tap into its existing networks. The company likely wouldn’t mind finding a way around Nebraska, after all its landowner troubles there.

Oil price rebound: It became especially easy for Obama to reject Keystone XL at a time when oil prices were low, Sands says. The president argued that it wouldn’t help gas prices, already down 77 cents per gallon in a year. A recovery in the barrel and pump prices will add pressure for Obama’s successor to find new supply for domestic refineries—and if a fresh Canadian gusher of synthetic crude can be a nifty symbol of environmental ills today, it might prove a nifty symbol of fill-up cost alleviation down the road.