Andrew MacDougall: The former AG hasn't been freed to give her whole truth, but we will get answers about what went wrong and how bad it'll be for the PM 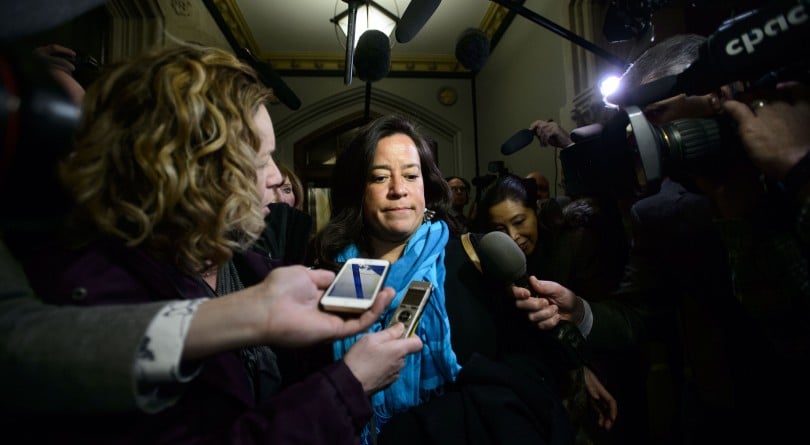 Wilson-Raybould arrives to a caucus meeting on Parliament Hill in Ottawa on Wednesday, Feb. 20, 2019. (THE CANADIAN PRESS/Sean Kilpatrick)

As surely as night follows day, a move by Justin Trudeau to brighten the outlook on SNC-Lavalin was met with more darkness from Jody Wilson-Raybould.

Trudeau had finally—after weeks of delay—freed Wilson-Raybould to speak on SNC, only for his former attorney general to quickly point out that she had not been freed completely. And no, it wasn’t just the fact she couldn’t comment on her interactions with the director of public prosecutions regarding SNC, as many journalists noted, it was that she had not been freed to speak about her time as Minister of Veterans Affairs or her resignation from that post.

But hang on a tick. Didn’t the whole SNC thing happen before her shift to Veterans?

It did, but Wilson-Raybould clearly thinks her conversations with Trudeau or with cabinet following her January move to Veterans are relevant to understanding what happened. We know from Michael Wernick, the clerk of the Privy Council, that many of Wilson-Raybould’s colleagues were worried about SNC. Perhaps someone around the Cabinet table—someone worried about jobs and growth, or angry about a friend’s demotion—had the nerve to ask Trudeau if having a new attorney general meant a new decision on SNC? Perhaps Trudeau even answered. We don’t know, but thanks to Wilson-Raybould’s latest intervention we’ve been granted license to wonder.

And then there are the conversations we absolutely do know happened post-shuffle.

Of particular interest is the (post-Globe and Mail exclusive) conversation between Trudeau and Wilson-Raybould in British Columbia on the eve of her resignation from cabinet.

Did that conversation feature a re-hash of past arguments in a fight to keep her onside? Did it feature an offer of progress on key Indigenous files in return for her acquiescence on SNC? Was there perhaps even an apology for the heavy-handed actions of certain high-profile PMO staffers? All we know for sure is that Trudeau said publicly they were straight on SNC after those conversations, only for Wilson-Raybould to then resign from cabinet.

In other words, Wilson-Raybould’s latest gambit means that even if she comes to the justice committee and says absolutely everything about what Trudeau has said she can say—and she says her 30 scheduled minutes at committee aren’t enough—there will still be more to say. It’s incredible.

Indeed, the amazing thing in the entire saga of SNC and the Trudeau government is just how little we actually know about the central allegation. Incredibly, we still have yet to hear from Wilson-Raybould about how she was pressured, and by whom.

To be sure, we’ve had some brief words from Wilson-Raybould—and some strategic leaking to her advantage—but nothing like the truth, the full truth and nothing but her truth. And while we know what others have said they said to Wilson-Raybould regarding SNC, they have delivered only one side of the conversation, and a potentially prejudiced one at that.

To recap: Justin Trudeau has assured Canadians his only words to his former attorney general were that a remediation agreement for SNC was her call, as stipulated by law. For his part, Gerry Butts swore up and down—albeit on his way out the door—that nothing untoward happened. And from Wernick we know that Wilson-Raybould was feeling pressure, but any that he added fit under the acceptable bounds of “lawful advocacy”.  This is the truth as now know it.

So what will MPs be eager to hear from Wilson-Raybould?

First, they’ll want to know when she made her decision on SNC. The director of public prosecutions told the government it would not be offering SNC a remediation agreement on Sept. 4 (before the law even came into force); knowing when Wilson-Raybould’s backing of that decision came is foundational to understanding any potential pressure that came after it.

MPs will then want to hear as much detail as possible about every SNC conversation we’ve heard about via the press or previous testimony.

A key question for MPs will be who initiated each of these discussions. As per the Shawcross Doctrine, traffic between an attorney general and members of a government on a live criminal matter should only ever flow one way. Was that the case here? We still don’t know the full picture, even after Wernick’s testimony.

Take the Sept. 17 meeting described by Wernick. It was ostensibly a meeting to discuss Indigenous files, but Wernick says Wilson-Raybould also sought confirmation from Trudeau that the SNC decision would be hers to make. But why did the subject even come up? Did Wernick let slip—or perhaps raise proactively—that he was seeing Neil Bruce, SNC’s chief executive, on the question of “Justice and Law Enforcement” the very next day? Did Wernick mention—or even know—that Bruce was also scheduled to see Finance Minister Bill Morneau and his senior staff the same day on the same subject? Or were those meetings only scheduled after Wernick’s discussion with Wilson-Raybould and the Prime Minister?

And while we’re at it, did either Wernick or Morneau ever feed back to Wilson-Raybould on the substance of those chats? Why was Bruce meeting with them on “justice and law enforcement”, and not Wilson-Raybould or her staff, unless it was to convey how the lack of a remediation agreement—an avenue they had spent years lobbying for—had placed them in significant financial difficulty? Was Bruce just hoping Wilson-Raybould would eventually avail herself of the opportunity to (re)consult both of them?

And that’s just a small sample of questions from one of Wernick’s three meetings.  There are even more questions about the other two meetings for MPs to explore, along with the meeting between Butts and Wilson-Raybould at the Chateau Laurier on Dec. 5, of which Wernick claimed no knowledge.

MPs will ask what, exactly, was said during the “robust debate” and “vigorous discussion” on SNC? Were any ultimatums delivered? How many times did Wilson-Raybould tell her colleagues that her judgment on SNC’s plea for a remediation agreement was final? Was Wilson-Raybould ever told her position as attorney general was under threat? What prompted Butts to tell Wilson-Raybould she could take her concerns to the Clerk of the Privy Council?

For their part, the Liberals at committee will probably try to mine why Wilson-Raybould didn’t resign in the face of any inappropriate pressure. This was a point brought up by Wernick, who said Wilson-Raybould always had recourse to complain during the process, and never did.

Thankfully for Canadians, Wilson-Raybould’s statement and answers today at committee will go a long way to rounding out the picture of what happened on SNC Lavalin.

By the end of the day we should have a much clearer picture of how bad this will all get for Justin Trudeau, even if the Prime Minister is still trying to keep some of Jody Wilson-Raybould’s truth from view.