Aluminum and steel tariffs: How Canada should react to Donald Trump

Paul Wells: President Trump is an incorrigible loose cannon. It is time the Trudeau government stops wasting so much time on him. 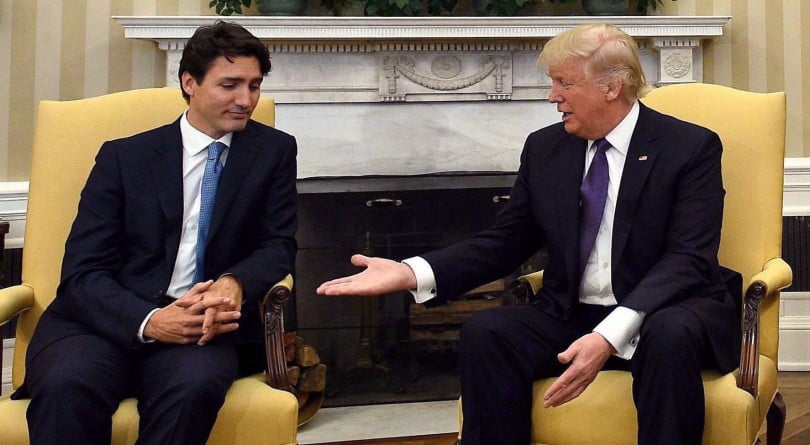 Chrystia Freeland was on yet another flight to Washington this week to try to keep the Trump administration from slapping arbitrary tariffs on Canadian steel and aluminum. Well, the nominal topic was NAFTA, but it was obvious tariffs would be on the agenda too. Before the foreign minister’s trip I dashed off a snotty and unhelpful tweet:

But snotty doesn’t mean inaccurate! Of course the minister came home empty-handed. She “left empty-handed,” the Canadian Press wrote. And this morning, after meeting Kim Kardashian to discuss prison reform and announcing he’ll pardon a deeply self-amused career racist, the President announced he’ll end an exemption for Canada and the EU for his aluminum and steel tariffs.

The Prime Minister and Freeland will announce Canada’s response today. Surely it will contain elements of reprisal designed to add hurt on top of the self-inflicted hurt that comes from making it more expensive to get steel and aluminum in the U.S. Economists will leap into action, explaining that tariffs are inevitably self-punitive, and that Canada shouldn’t get into a tit-for-tat with an economy 10 times larger and, currently, vastly more random in its actions.

A strategic downgrade of the Canada-U.S. relationship needn’t be pointlessly provocative. It should simply take note of the fact that executive power currently resides in the hands of a man who values policy discussions with Kim Kardashian, pardons Dinesh D’Souza and Joe Arpaio, calls humans animals  and can’t be stopped from massive attacks on Canada’s economy despite all the forelock-tugging from all the airlifted delegations to Washington and all the carefully dosed bonhomie from a prime minister who prides himself on his ability to get along with just about anybody.

RELATED: Watch Trudeau try not to react while listening to Trump

The president’s an incorrigible loose cannon. It is time to stop wasting so much time on him.

In his otherwise curious book about Canada’s foreign policy, the Montreal political scientist Jocelyn Coulon points out that Freeland is the only NAFTA foreign minister with direct responsibility for NAFTA negotiations. Luis Videgaray doesn’t hold the file for Mexico. Mike Pompeo doesn’t for the US. Freeland has worked hard, but NAFTA has plainly constrained her ability to act as an effective foreign minister on issues outside NAFTA. Fine. Great. Let her be a full-time foreign minister. Hand NAFTA over to the indefatigable trade minister, François-Philippe Champagne. He won’t get anywhere. The Americans will find him annoying. This is a feature, not a bug.

But that’s just a start. Tell the Americans we’re happy to show up in Washington for regularly-scheduled trade negotiations, but we have a country to run up here so if anybody in the Trump administration wants to open up a sidebar or chat informally, they’re welcome to hop onto a flight and haul ass to Ottawa. The President should, of course, be welcome to attend the G7, where the legendary hospitality of the Charlevoix region will be available to him. But the prime minister, who has courteous guests to attend to, will have nothing to say to him outside the plenary sessions.

The opulent U.S. embassy Fourth of July party is an oddity, a relic of the heyday of the friendly relationship between Bill Clinton and Jean Chrétien in the 1990s. Since then, in good times and bad, it’s been religiously attended by large numbers of thousands of Bytown swells who line up for sliders and weak beer. This might be a good year for tumbleweed to blow across the empty expanses of the ambassador’s lawn, and in particular for it to be impossible to find any member of the Canadian cabinet anywhere on the grounds.

Condolence calls to the White House after America’s periodic mass murders, a little-noticed but real and macabre feature of diplomacy these days, should probably continue, but Trudeau should limit the conversations to expressions of dismay over the latest pointless slaughter. On other topics, he should suddenly be too busy to pick up the phone. Trudeau called Mike Pence, the U.S. vice president, this week to talk about tariffs, even though Trump was on duty. It was a striking departure from parity, and understandable, but it’s time to reverse the gradient of prestige: if Trump calls, perhaps the call could be forwarded to Champagne or to the Governor General.

In all negotiations, it is important to bear in mind the thing that motivates your counterpart. Trump will be perfectly delighted if his economy and ours suffer while Canadian officials continue to make elaborate protestations of their esteem for the president. Withholding our goods will not make things better. So it is time to withhold our esteem.