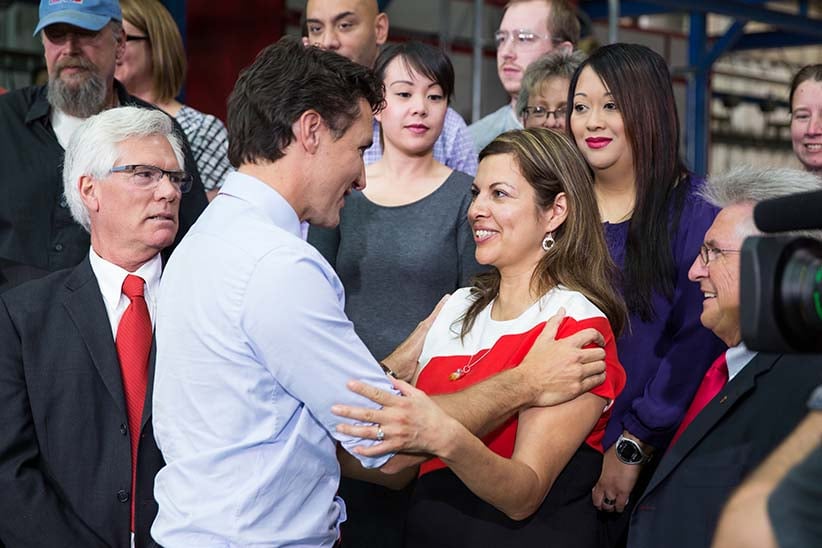 The massive riding of Churchill–Keewatinook Aski now covers more than half of Manitoba. It grew again in 2012, as it does every few years, swallowing more and more remote, northern communities as people migrate south, to Winnipeg and the surrounding areas. The riding is also among the country’s coldest: The average high in the winter is -21° C. This fall, however, it’s suddenly home to one of the country’s hottest races, pitting a popular NDP star, Niki Ashton, against a rising Anishinaabe politician, Rebecca Chartrand, a teacher, author and educational consultant running for the Liberals.

Ashton, the NDP’s talented Aboriginal affairs critic and a formidable campaigner who won with more than 50 per cent of votes in 2011, was expected to skate to victory on Oct. 19. The union-friendly northern riding has voted orange all but twice in the past 35 years, and Niki’s father, Steve, has held the sister riding of Thompson for the provincial NDP for 34 years.

But the NDP’s fortunes have turned, nowhere more so than in Manitoba, where, province-wide, it’s become a two-way race between the surging Liberals and the Conservatives, who are now tied at 39 per cent, with the NDP trailing at 18 per cent. Then there’s Chartrand herself. Though still trailing Ashton in the polls, she is considered a bridge-builder with an inclusive leadership style, and the ability to engage the non-Indigenous community in tough, emotional conversations about race.

The single mother of four also has experience with some of the issues to which she’s trying to bring greater awareness. Her 11- and 13-year-olds came to her through foster care, both as emergency placements, intending to stay for a weekend. But “a few days turned into a week, which turned into a month, then a few months.” They’re “now part of my home and my heart.”

Chartrand, a boxer with a tough streak who grew up in Winnipeg’s north end, has also brought attention to murdered and missing Indigenous women and girls; one of her dearest friends went missing and was found murdered two weeks later in Winnipeg. In 2001, Chartrand staged a play she co-wrote about her friend called Those Damn Squaws.

She never saw herself as a politician, but her deep frustration with the lack of momentum in improving the situation brought her into politics, first at the municipal level. She ran for Winnipeg city council last fall, angered by a lack of political will to support Drag the Red, a volunteer effort she helped launch to drag the Red River to try to locate the bodies of missing Indigenous women.

The ongoing conversations on race relations in Winnipeg pushed her to run federally this summer: “I’ve been working hard, trying to give voice to these issues,” she tells Maclean’s. I recognize we need to be part of this change.”

Chartrand has the support of high-level First Nations leadership, including Phil Fontaine, former grand chief of the Assembly of First Nations; and she was recently endorsed by Katherine Morrisseau-Sinclair, the well-known wife of Justice Murray Sinclair. Maeengan Linklater, an urban Indigenous leader and poet, is heading her campaign. “A huge number of non-Indigenous people have also expressed their support,” says Fontaine. “We all recognize the incredible potential she represents.” Former prime minister Paul Martin travelled to Cross Lake, in northern Manitoba, to help kick off her campaign.

This summer, Chartrand visited 30 of the riding’s 40 First Nations communities, often travelling in an RV with her kids, staying with friends and relatives in The Pas, York Landing, Camperville, Thompson, often educating voters, some of whom “don’t know when to vote, where to vote, how to vote,” she says.

Linklater says she’s like the Robert Redford character in The Candidate: In it, he throws his hat into a race that’s already been won, against a can’t-lose candidate. Suddenly freed to say whatever he wants, his candidacy catches fire. It didn’t hurt that Trudeau flew to Manitoba with a $3-billion promise to support the East Side Road that would connect 13 communities in the riding that are currently isolated.

Chartrand is still very much an underdog, though internal Liberal polls have her three points behind the NDP. But Ashton, who was just 23 when she knocked off the incumbent for the party’s nomination for the riding, is a formidable opponent.

She’s working on a PhD, and entered politics after returning after studying human rights. “The more time I spent looking out, I realized there were serious, human rights issues not being resolved right here at home.” She notes that she’s the only major candidate born and raised in the north—“that’s an issue for us in the north,” where “third-world living conditions” prevail. “You gotta fight hard, because a lot of issues we face are ignored at the federal level.”

Ashton, who was briefly interrupted by conservation officers who believed her team—dressed in orange hoodies—were illegally hunting moose, is also a key architect of the party’s Indigenous platform, being launched this week in Edmonton. “First Nations have paid a high price for 148 years of Liberal and Conservative governance. People want change.”

The 75 per cent Indigenous riding is deeply troubled, with the country’s lowest median income: just $16,606. It’s also the second-youngest riding in the country, after Nunavut. But with the country’s highest unemployment rate, at 32 per cent, there are few prospects for those young people. Overcrowding is a major problem: In the Island Lakes Area, 10,000 people live in slightly more than 1,000 homes, roughly 10 people per home. Another hot-button issue is flooding: Some of the First Nations communities displaced by provincial flooding four years ago have still not returned home, including Lake St. Martin First Nation, which has registered 17 suicides since 2011.

“These are not just Aboriginal issues,” says Chartrand. “These are our collective issue as Canadians, Manitobans. The North has been neglected for too long. What people are experiencing, day in, day out, is horrific.”

This story has been updated from an earlier version to include comments from Niki Ashton.