A new poll shows voters like the USMCA trade deal, as GM looks set to abandon Oshawa and the Senate gets back to debating a bill to end the Canada Post strike 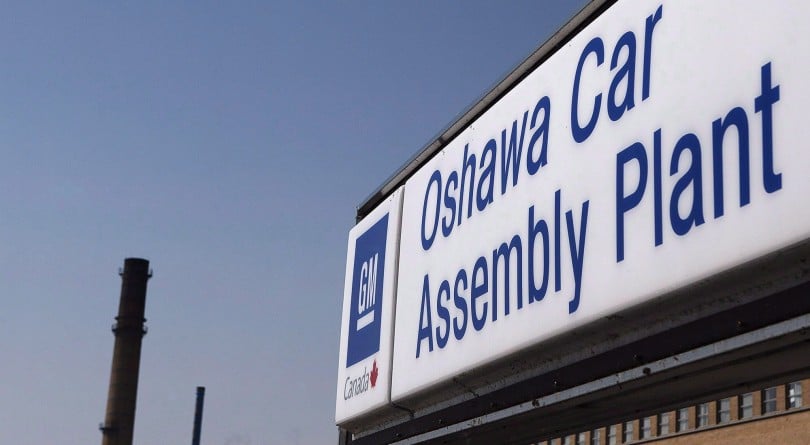 A sign stands outside Oshawa's General Motors on Monday, September 17, 2012. General Motors of Canada is proposing to build a 6.4 megawatt co-generation plant that will use renewable landfill gas as fuel to generate electricity and recover thermal energy. THE CANADIAN PRESS/Michelle Siu

In the wake of Canada, the U.S. and Mexico reaching the new trade deal to replace NAFTA, the opposition tried to paint the agreement as a failure. Conservative leader Andrew Scheer said he’d have “signed a better one” while the NDP Leader Jagmeet Singh summed it up as “new name, worse deal.” But as John Geddes notes, a new Pollara Strategic Insights poll for Maclean’s suggests that spin will fall flat with voters in the next election:

More than half of those surveyed who have an opinion—54 per cent—liked the way the government negotiated, and the same percentage feel upbeat about the outcome. Nearly half—49 per cent of those willing to state a position—go even further, agreeing that Canada “got the best possible deal.”

From the standpoint of Scheer and Singh’s plans for painting Trudeau as a lousy economic manager heading into next fall’s federal election, these results seem to take USMCA off the table. And that has emerged as a key dividing line between Canadian and U.S. politics. “Canadians are definitely on-side with free trade agreements and other multilateral agreements,” said Pollara president Craig Worden. “Canadians seem to realize that we need to be open and outward-looking, whereas in the United States protectionism is running at possibly an all-time high.” (Maclean’s)

Alberta has tried demanding and pleading with Ottawa to take action on the Canadian oil glut that’s driving down prices, but hasn’t yet got the answer it wants. So over the weekend Alberta Finance Minister Joe Ceci tried shame: “We need them to recognize that, to act quickly and not just voice platitudes,” he said. “If we were, say, Bombardier or if we were the auto industry, there would be all hands on deck trying to address this as quickly as possible.” (Global News)

Aaaaaand…. cue mass layoffs in the auto sector. The rumours broke last night and today General Motors is expected to to make it official. GM will end all vehicle production in Oshawa, Ont., a move that would impact 2,800 jobs. (CTV News)

The Senate will resume debate over legislation that would force striking Canada Post employees back to work. If it passes, the strike could be over as early as tomorrow. Meanwhile negotiators are still at it, trying to hammer out a deal before any legislation can take effect. (Canadian Press)

We can shake our heads and call it stupidity; it’s no secret that Trump lacks the intellectual rigour most U.S. presidents have possessed. But to say he is dumb misses the point. It isn’t a lack of intelligence that’s behind this latest act of madness.

In fact, there actually are smart people who think Trump has made the right decision. Their arguments echo Trump’s, though with more finesse. The problem, they say, is Iran. This raging bogeyman of the American right seems to be the only threat to the world order, and anything the U.S. does to confront it, even excusing murder, is acceptable.

But there is a fundamental flaw with this argument. It rests on the assumption that a country like Saudi Arabia offers the best partner for bringing some semblance of calm to the Middle East. It banks on the fact that the House of Saud, over more than seven decades in power, has been a reliable partner for the U.S. (Maclean’s)

What’s Ottawa doing with your money, Part I: A federal agency that was created to fight poverty spent $500,000 to come up with a name, logo and branding (Globe and Mail)