Andrew Scheer addresses Parliament: 'This is the job of Team Canada' [Full Transcript]

The Conservative leader raised concerns about the government response to the coronavirus, but struck an optimistic note on parties working together for Canadians 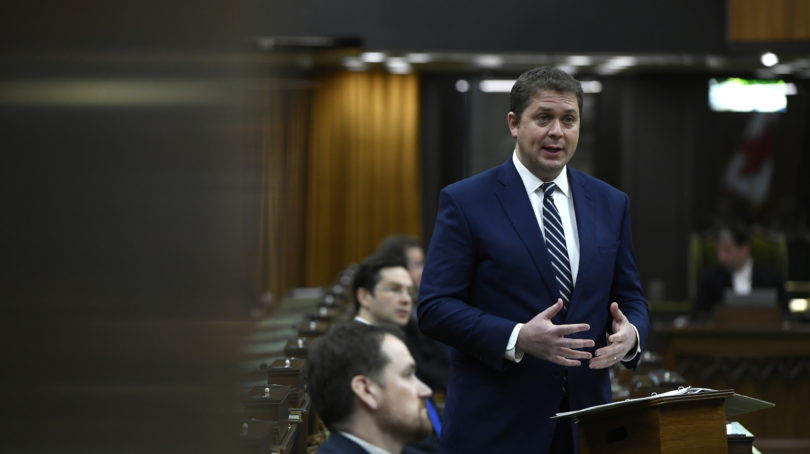 Scheer rises in the House of Commons, as Parliament was recalled to consider of measures related to the COVID-19 pandemic, on April 11, 2020 (CP/Justin Tang)

The leader of the Opposition addressed Parliament, which was recalled to debate the government’s emergency wage subsidy legislation, on April 11, 2020. Here are his remarks regarding the COVID-19 crisis.

It is perhaps very fitting that we are meeting here on this day, Holy Saturday. The day between the sadness of Good Friday, the day Christ suffered and died for our sins and Easter Sunday, the day he rose and conquered death.

For we are clearly in the middle of great hardship and suffering, but we have every reason to look ahead with hope towards the end of the health crisis we are currently facing.

Our hope is founded on the ingenuity and resilience of humanity and strengthened by the examples of previous threats which we have all overcome.

Mr. Speaker, the past month has tested Canadians. We’ve been told to stay at home away from family and friends. Birthdays, anniversaries, holidays, religious gatherings have looked different this year. We’ve relied on Skype or FaceTime to stay connected instead of family dinners, church services or weekend gatherings. Stores and restaurants have been told to close their doors. As a result, almost 6 million Canadians have lost their jobs, and the businesses that are still open are worried about how they are going to hang on.

[speaking in French] And despite all of our efforts, more than 22,000 Canadians have fallen ill and unfortunately, over 600 Canadians have died. Our thoughts and prayers are with all of those who have lost a loved one.

In the coming days and weeks our actions will be more important than ever. Now that the government has finally presented its projections. We know what to expect. We must continue to follow public health directives and we must act together as a nation. [French translation ends]

On behalf of the Official Opposition, I want to acknowledge all of the Canadians who are going above and beyond during these unprecedented times. To the nurses, the doctors, the truck drivers, the grocery store workers, cleaners, pharmacists, farmers and other essential workers, we say thank you.

To the parents juggling school work and their own jobs, we say thank you. I’ve always had respect for the teachers that have influenced my life, Mr. Speaker. But after spending the last few weeks trying to keep my children up to date with their studies, I have a newfound respect and admiration for what they do each and every day of the school year.

To the churches, the synagogues, mosques, temples, gurdwaras, food banks, shelters and other organizations helping Canadians during these difficult times, we also say thank you. And to the public servants working hard each and every day to make sure that Canadians get the help they urgently need, we say thank you.

[speaking in French] Canadians have important questions about the situation we are experiencing. Our economy is at a standstill. And even though the government is announcing programs, funds still aren’t flowing to Canadians. We have a deficit of $184 billion and years of discipline will be necessary to get the Canadian economy back on track. New government documents released to the Health committee also paint a concerning picture. [French translation ends]

New government documents released to the health committee also paint a concerning picture. As one reporter put it, “The documents show the government persistently downplaying the threat of coronavirus until it was too late.”

Other countries like South Korea, Singapore and Taiwan ramped up testing and secured medical equipment early on, which allowed them to flatten the curve quickly, preventing their economies from being completely shut down.

We were told for weeks that the risk of COVID-19 to Canadians was low. We now ask why that risk assessment seemed to change overnight. Why did the government wait so long to impose travel restrictions? Why were travellers not originally screened? Why do we have a critical shortage of medical supplies? Why is it taking the government so long to sign contracts with companies that are offering to retool their facilities to provide much needed medical equipment? Why are other countries further ahead of us when it comes to testing and tracing? These are some of the questions that Canadians have and they deserve answers.

And while we know that mistakes have been made in the past, Conservatives are focused on looking to the future on how best to get Canada through this crisis, keep our citizens healthy and get our economy back on track.

The Prime Minister has said that we need to prepare for a second and perhaps a third wave. Canadians want to know how this government is preparing to get ahead of those waves.

[speaking in French] This is why the Conservatives are demanding regular opportunities to ask the Prime Minister and the House of Commons questions about all aspects of the government’s response to the COVID-19 crisis. We also want to hold weekly parliamentary committee meetings where MPs can move motions, call witnesses and ask ministers and government officials questions. We cannot wait for this pandemic to end to hold our government to account.

Parliament has a crucial role to play right now through debate, discussion and regular questions from the Opposition. We will obtain better results for Canadians. [French translation ends]

Parliament has a vital role to play now through debate, discussion and regular questions from the opposition, we will get better results for Canadians. Today’s emergency legislation is a good example of this. When the government first announced a 10 per cent wage subsidy,  Conservatives and small business owners across this country raised concerns. Other countries were offering far more and it was clear that 10 per cent was just not going to come. So we pushed for a significant increase. A few days later, the wage subsidy was raised to 75 per cent.

Credit unions weren’t originally allowed to deliver the $40,000 emergency interest free loans. This left many business owners who use credit unions, especially those in rural locations, left in the lurch, making it harder for them to get the support they needed.

We called on the government to make changes and now credit unions can deliver these loans as well. The need to show a 30 per cent revenue decrease to qualify for the wage subsidy meant too many new and seasonal businesses didn’t qualify. We raised this concern and now there is more flexibility. And this week we rolled up our sleeves and worked with the government to ensure that businesses have the certainty they need to keep their employees on the payroll.

[speaking in French] Conservatives have been part of Team Canada since day one, offering constructive solutions to improve the government’s response to this pandemic. [French translation ends]

Conservatives have been part of Team Canada since day one, offering constructive solutions to improve the government’s response to this pandemic. But we know there’s still more work to do. Conservatives have proposed meaningful solutions, such as rebating the GST to small businesses that have collected it in the last year to provide a much needed cash injection. We’ve also suggested using loss of earnings, subscriptions or orders as a way to ensure that more businesses qualify for this wage subsidy. And we’ve put forward ideas to help our energy and charitable sectors, like increasing the charitable donation tax credit.

[speaking in French] We want the government to begin implementing our solutions so that no Canadians are left behind. This is the job of Team Canada. [French translation ends]

We are optimistic that the government will listen to the ideas that we’re putting forward to the benefit of all Canadians, Mr. Speaker. That will be a truly Team Canada approach. Thank you very much. Merci beaucoup.