Andrew Scheer and the Conservatives' choices

Paul Wells: The party aims to build a winning coalition, stay united and infuriate Liberals. Only one person has done it in the last 30 years. 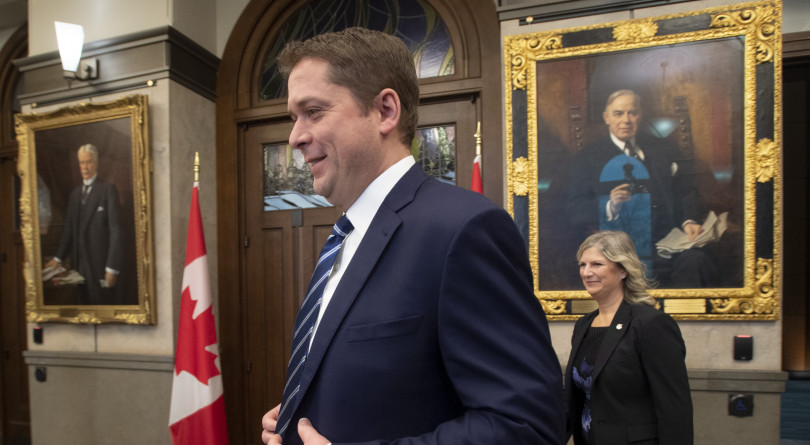 Scheer enters the foyer of the House of Commons to speak with the media on Nov. 28, 2019 in Ottawa (THE CANADIAN PRESS/Adrian Wyld)

On Friday Andrew Scheer will address the United Conservative Party convention in Calgary, and the reception he gets should give us all a better sense of his chances of hanging on to the Conservative leadership. So far we’ve mostly heard from Toronto-area Conservatives who backed other candidates against Scheer for the leadership, and colleagues of mine in the press gallery who haven’t voted Conservative since Joe Clark was the leader. Which doesn’t mean they’re wrong, necessarily. Scheer has been even less persuasive since the October election than he was before, which takes some doing. But Friday will offer hints about how Scheer is doing with the bedrock of the Conservative base.

A few words about the choices Conservatives face. Since I wrote this spectacularly half-hearted defence of Scheer a month ago, I haven’t developed greater certainty. All I know is that the problems facing the Conservative Party, and Canadian politics in general, don’t start and end with one Regina MP. And the cost of choosing the wrong path is high.

A party that makes poor leadership choices risks losing about three-quarters of its caucus. That’s not a number I made up. Between 2000, when the Liberals won 172 seats, and 2011 when they won 34, they had switched leaders three times and lost about 80 per cent of their caucus. And then the NDP followed suit. In 2011 under Jack Layton they won 103 seats. In 2019 under Jagmeet Singh they won 24. That’s a decline of 77 per cent of MPs. To be fair, of course, the NDP had no choice when this process began: keeping Layton was, sadly, not an option.

So if Conservatives spent the next decade losing 90 or so of their 121 seats, it would hardly be unprecedented. It’s precedented. Recently precedented. Doubly precedented. Keeping a leader offers no guarantee of success, but neither does replacing him. And “I’m sure we’ll come up with someone” isn’t a strategy.

The second thing to keep in mind is that what Conservatives want from their leader is hard to do. Liberals are hard to beat. They work hard, they can be wily, they get a sympathetic audience in the news columns, their power base—Ontario and sometimes Quebec—is big. Only one leader has beaten the Liberals in a federal election in the last 30 years. His name was Stephen Harper and he did it three times. That’s why Abacus found he’s the only potential candidate whom Conservative voters prefer to Scheer. And he’s probably not a potential candidate. He’s probably done.

I qualify those statements because he’s Stephen Harper, so who knows? But if Conservatives don’t have Stephen Harper as their leader, it’s hardly obvious who can achieve the same effect—build a winning coalition, keep the party united, infuriate Liberals — with a different style and different priorities. The usual answer from the news columns is that a leader should be socially progressive and economically conservative. But that combination’s wins-and-losses record isn’t great either.

The final question that should nag at Conservatives is whether the tools they’ve evolved over the past decade are compatible with good government. This question should be nagging everyone, in fact, and that very much includes supporters of other parties. The low ceiling on political donations set by Chrétien and tightened, in 2006, by Harper has had effects that were predictable and predicted.

As Ken Whyte wrote here in 2013, when 150 CEOs are forbidden to donate any more than 150 random people in Edmonton; and public subsidies are cut to zero, so that only private donations can finance party activities; and what makes individuals likeliest to donate is messages built on fear and resentment; then “get used to reams of government policy inexplicable but for its ability to grease the bagman’s gears.”

The Trudeau Liberals have learned these lessons as well as the Scheer Conservatives. Both parties specialize in “The other guys are coming to get you” as a campaign pitch. It’s a shaky foundation to build a country. In that light, it’s hard to generate too much sympathy for Scheer when I read that the same techniques of direct mail, phone blasts and targeted social media will be turned on Scheer as both he and his tormentors recently used against the Liberals. But again, Conservatives wondering how to proceed should note that a leader of the new group campaigning against Scheer is Kory Teneycke, and that Kory Teneycke’s last three big ideas were Ezra Levant, Maxime Bernier and Doug Ford.

Whether Andrew Scheer should lead the Conservatives is a big question. I honestly hope this column has not come close to answering it. There are bigger questions: what the Conservative Party stands for, and what Canada stands for, and whether our politics is now so hopelessly dependent on conflict over resolution, fear over hope, disdain over trust and denigration over accommodation that none of us can find our way home.