Andrew Scheer is dreaming of a stress-free mortgage

Politics Insider for Sept. 24: Scheer tackles housing affordability, Trudeau is back to being all-smiles-on-deck 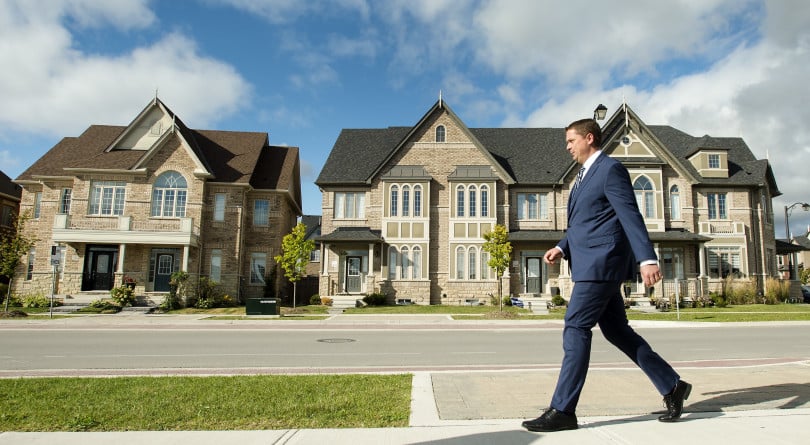 Don’t stress out. Conservative leader Andrew Scheer grabbed early headlines on Monday by announcing his government would nix the mortgage stress test for homeowners renewing their mortgages, while lowering the bar for first-time buyers. He also vowed to bring back 30-year amortization rates for first-time homebuyers (the current cap is 25 years), which would lower monthly mortgage payments⁠—but also, of course, create longer periods of interest-accruing debt. “Young first-time homebuyers often have their highest earning years ahead of them,” Scheer reasoned aloud to a crowd of reporters in front of a seemingly random backdrop of row houses in Vaughan, Ont. “And so, as they get promoted and as their incomes go up, they’ll be able to carry the mortgages that they’ve gotten into.”

Critics argue this would rescind measures that prevented a Canadian housing collapse similar to the U.S. recession of 2008. (The Twittersphere is filled with quippy one-liners to that effect.) In response to some Liberal programs, including their proposed one-per-cent foreign speculator tax and the new first-time home buyer’s incentive (which has the government offering interest-free loans of five or 10 per cent in exchange for the same percentage of the sale, whenever that may be), Scheer said his team would review those plans to see whether they were truly effective.

A different guy at home. For The Globe and Mail, Cathal Kelly spent an evening with Scheer in his home, breaking bread and slicing roast beef. The portrait is a quiet, intimate look at a man whose personality has yet to shine through into the media.

Upon meeting him, two things strike you about Mr. Scheer: He is taller than you expected – 6-foot-4 – but recedes upon introduction. He is one of those big people who take pains through their comportment not to loom over you.

This was meant to be an interview over dinner. He’s wearing a Saskatchewan Roughriders T-shirt tucked into jeans. I’m wearing a suit and tie.

“He’s wearing a suit,” Mr. Scheer says, looking at his aide and tugging at his shirt like it was forced on him. “Is this too casual?” (The Globe and Mail)

The $6-billion man. In a brief stop at a venerable Italian bakery in Niagara Falls, Ont., Justin Trudeau gave no speeches and made no promises, but a hundred-odd fans clamoured for selfies and roared in applause nonetheless. The event came hours after a more thorough stop in Hamilton, Ont., where he promised a $6-billion investment in more family doctors, mental health services and prescription drugs. After the CBC ran a story with an appropriately critical headline (“Liberals promise to build national pharmacare program—but offer few details”), Trudeau chose to tweet that article out, which seems, you know, a little odd, considering he could have easily picked a headline that didn’t criticize him for pulling $6 billion out of thin air.

Regardless, Trudeau is eager to move on from the blackface scandal, which still haunts his campaign. While he explained the Aladdin and Banana Boat instances, he’s yet to justify the third, which appeared in a video released by Global News. Lucas Meyer, a Newstalk 1010 reporter, pressed him on what that costume was meant to be, but Trudeau dodged the question with a broad line about fighting intolerance. “With all due respect, Prime Minister, that wasn’t even close to answering the question,” Meyer replied. Trudeau offered a second non-answer after that. The world may never know the answer.

Assad’s man in Montreal. In a quick and quiet move, Waseem Ramli, a Kuwaiti-born Syrian living in Montreal, has been promoted to the role of “honorary consul” between Syria and Canada. It’s an odd and unsettling appointment for a man whose close ties to Syrian mass murderer Bashar Assad could spell danger for Canada’s thousands of Syrian refugees, who specifically fled his lethal rule.

Among the thousands of Syrian refugees who have settled in Montreal since 2015, the Kuwaiti-born Ramli is a notorious character. To many, his Humvee is an unsettling, menacing sight. Even so, Ramli, the director of his own management consultancy and proprietor of the popular Cocktail Hawaii restaurant on Rue Maisonneuve, has held little sway over Montreal’s Syrian community.

On October 1, with Ottawa’s blessing, Ramli will become perhaps the most powerful Baathist regime official in North America. As Montreal’s “honorary consul,” Ramli will control the consular affairs of tens of thousands of people in the Syrian diaspora in Eastern Canada and much of the United States. The only other Syrian honorary consul in North America operates out of an office in Vancouver. (Maclean’s)