At the federal leaders debate, the Conservative leader became a target over his position on First Nations and pipeline approvals 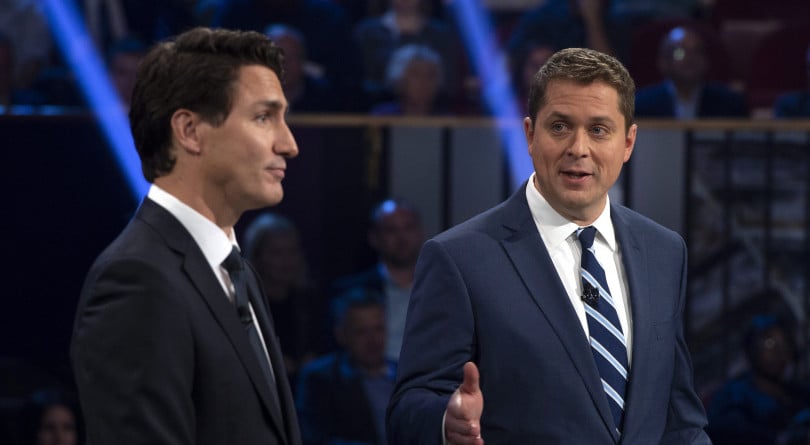 Scheer makes a point with Trudeau at the Federal Leaders Debate on Oct. 7, 2019 (Sean Kilpatrick/CP)

Conservative Leader Andrew Scheer came under repeated fire in the leaders debate section on Indigenous issues for his opposition to policies that he said would lead to First Nations blocking pipelines and other resource projects—often against the preferences of other First Nations that badly want that sort of economic development.

“There are dozens of Indigenous communities who want these projects to go ahead because they know that is the key to prosperity,” Scheer said in one part of a series of exchanges in which Liberal Leader Justin Trudeau and Green Leader Elizabeth May both pressed him on the question of how to consult with First Nations on resource projects in territory over which they have treaty rights or traditional claims.

When Scheer was answering questions from reporters after the debate, the issue came up again. He stressed that whatever system is put in place to give Indigenous peoples a fair way to be consulted must ultimately allow “big projects to get done.” “It will not happen if any one First Nation can can veto projects,” he said. “That is something that First Nations leaders and grassroots organizations are concerned about as well.”

Trudeau took aim at Scheer over Conservative opposition to the United Nations Declaration on the Rights of Indigenous Peoples (UNDRIP), which includes a clause calling for “free, prior and informed consent” from Indigenous peoples over development on their land. “We need to keep moving forward in a way that respects Indigenous peoples, respects that there’s going to be a range of views,” Trudeau said, “but is grounded in the UN Declaration on the Rights of Indigenous Peoples that you have consistently blocked through your party’s actions.”

But Scheer repeatedly stressed that exactly how the UNDRIP standard would apply in Canadian resource projects hasn’t been clearly spelled out. “When we’re talking about the UN Declaration on the Rights of Indigenous Peoples, we need to remember that when we talk about ‘free, prior and informed consent,’ that leaves a great deal of uncertainty about what that means,” he said. “And there are large numbers of Indigenous communities who want these energy projects to succeed and we need certainty and clarity around that.”

Trudeau argued that refusing to embrace UNDRIP is part of Scheer’s general backtracking to the approach of the Stephen Harper-led Conservative government, which led to lengthy court battles and stalled developments. “Mr. Scheer, you’re putting forward exactly the same plan that didn’t just fail Indigenous peoples, didn’t just fail Indigenous communities and their kids, but the also failed to get important energy projects built,” he said.

Asked about UNDRIP by reporters, Scheer noted that Perry Bellegarde, the national chief of the Assembly of First Nations, comes from his Saskatchewan riding. Scheer said he talked about UNDRIP directly to Bellegarde, and has not gotten an answer that satisfied him. “I’ve asked him, and I’ve asked other Indigenous Canadians who are promoting and supporting the United Nations Declaration on the Rights of Indigenous Peoples, what ‘free prior and informed consent’ means,” Scheer said.

NDP Leader Jagmeet Singh also waded in on the issue of Indigenous rights, but he seemed to contend that solving these problems is mostly a matter of political will, brushing aside policy specifics. “All of the issues that you’ve raised come back to that basic question of respect and dignity,” he said.