The Tory leader faces a choice—is he a nice guy, or nice and angry? 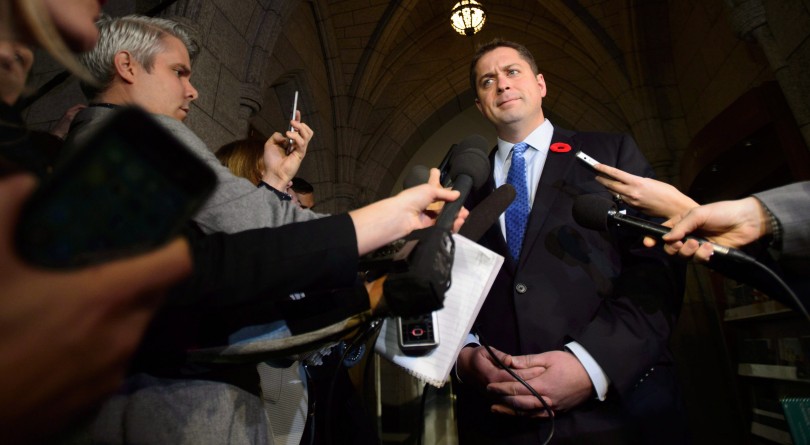 Remember the Choose Your Own Adventure books, where you’d read a chunk of narration starring you, then decide on a course of action and turn to the corresponding page to ﬁnd out what happened next?

You are a Canadian politician who is plenty experienced but still amiably baby-faced. Despite being in federal politics for more than a third of your life and taking over the leadership of your party a year and a half ago, you are a somewhat unknown commodity outside of your party. Your main opponent is, well, extremely not an unknown commodity. His socks have been the subject of international interest.

There is a federal election coming up fast. Recently, a political cousin of yours enjoyed enormous ballot-box success by basically being the human equivalent of the digit with which one might thumb one’s proverbial nose. The people who voted for him really, really liked that, and there were a lot of them.

A defector from your own party is now shimmying gleefully across what used to be the right-most frontier of the political landscape. Elsewhere, there have been signs that a slash-and-burn approach is popular, that people are hungry for politicians whose anger matches their own.

READ MORE: Why Andrew Scheer is spouting nonsense about GM

So far, that has not been your way. There were clear signs that people had tired of a certain glowering tendency from your party. You are not much for glowering. The guy with the socks has quite possibly never glowered once in his entire life.

So now you face a choice.

If you decide to stick to your friendly, incremental approach and search for an upbeat way to tell people you have ideas to make their everyday lives better, hoping they listen, turn to page 101. If you instead decide to forcibly ditch the amiable thing and grab some of that angry sizzle, turn to page 123.

Of course, pages 101 and 123 have yet to be written, and it’s tricky to predict whether either would be a path to electoral triumph or a drubbing. That’s the thing about choosing your own adventure: sometimes you ﬁnd a sack of gold in a cave, and sometimes there’s a hungry mountain lion wearing cool socks.

At the Conservative policy convention in Halifax in August, Scheer told the party faithful that when he ﬁrst became leader, people used to shake his hand when they met him and nonchalantly wish him well. Now, he said, they grip his arm with both hands and implore, “Andrew, you’ve got to beat these guys.” It was a good line, and he delivered it well: droll and knowing.

“The Liberal party is ﬁnally showing its true colours,” he continued. “And I’m talking about the real Liberal party. The tax-hiking, rule-breaking, perk-loving, deﬁcit-spending, debt-mounting, virtue-signalling Liberals Canadians have come to know and despise.” The harder-edged tone in that bit sounded a bit odd ﬁltered through Scheer’s natural “Aw, shucks” setting, but the audience liked it.

Among those at the convention was Chilliwack-Hope MP Mark Strahl, who became friends with Scheer after Strahl was elected in 2011, taking over the riding from his father, Chuck Strahl. “I’ve been in his minivan with the Goldﬁsh crackers ground into the seat,” Strahl says of Scheer. “That’s who he is, and I think what you see with Andrew is what you get, which is a humble, hard-working guy who understands the struggles of everyday Canadians.” This was a contrast Scheer emphasized in Halifax, too, and it’s certain to be a constant message as election day draws closer: we, the Conservatives, understand the everyday pressures of regular Canadians and can offer help, while Justin Trudeau and his party subsist on a steady diet of canapés and self-righteousness.

The message the Tories took from the 2015 election was that Canadians liked their economic and foreign policy just ﬁne, Strahl says, but had grown weary of what they saw as “the vindictive nature of some of our communication.” At the same time, he argues there is a real frustration among Canadians that his party needs to respond to next year. “We need to make the case—and we need to make a strong case—of why we need to replace this current government,” he says.

In recent months, Scheer’s Conservatives have dabbled in vindictive communication of their own, including direct shots at the media. “Never have taxpayers and everyday Canadians more needed someone who will stand up to this government, the media and the privileged elite on their behalf,” Scheer wrote in an open letter published by the Toronto Sun in October. Conservative MP Pierre Poilievre called a Bloomberg journalist a “Liberal reporter” in response to a story about a business organization supporting the carbon tax. Scheer, too, looks to be sampling from page 123 and trying out a nastier edge, particularly in question period.

Strahl says frustration and a “siege mentality” takes hold when politicians feel there is a double standard in coverage, and he argues that even ordinary pushback against the media or a whiff of the word “populism” is now loaded with toxicity. “I think that’s the danger, when people start to equate all criticism of the media with a Donald Trump-level scorched-earth strategy, where the goal is to undermine conﬁdence in the media,” he says. “That is certainly not the case with Andrew Scheer.”

Melissa Lantsman, Doug Ford’s war room director and spokesperson during the Ontario election and now vice-president of public affairs at Hill+Knowlton Strategies, detects a general anti-establishment shift to the right in Canadian public opinion lately, driven by people who feel the state isn’t helping them out. If, as seems likely, Albertans line up behind Jason Kenney’s United Conservative Party in May, more than half the Canadian population will be represented by conservative parties, she points out.

READ MORE: Trudeau and Scheer agree: Election 2019 is going to get nasty

But while she argues that Scheer has been “quietly” racking up wins such as the Chicoutimi by-election in June and leading the fundraising race, what he and his party lack is the surge of voter rage that propelled Lantsman’s former boss into the premier’s ofﬁce in Ontario. “I’m not sure that we’re there yet federally, and that’s an obstacle for Scheer,” she says.

To better understand the electorate, pollster Greg Lyle, president of Innovative Research Group, likes to group voters into “values clusters.” The voters Lyle calls “thrifty moderates,” for instance, hold moderate views on the environment and health care, and are ﬁscally conservative but not especially enamoured of free enterprise. That group would like what the Liberals have to say in several policy areas, Lyle says, but their support could be peeled away by elitist-tinged issues like the Prime Minister’s family vacation chez Aga Khan or the French villa that his ﬁnance minister, Bill Morneau, failed to disclose. The Tories need to hit the right note to draw them in. “The basic message is ‘They don’t get you, they’re not like you,’ ” Lyle says, adding that the carbon tax could be held out as proof.

But the slow-motion implosion of the NDP under Jagmeet Singh has given the Liberals a distinct and unusual advantage for 2019, he says, in that a core of left-leaning voters who would normally be at home with the New Democrats see a non-entity there at the moment and remain ﬁrmly with the Liberals. Once Lyle lays out the various groups of voters, it becomes clear what a tricky balancing act Scheer and his party face in trying to overcome that Liberal advantage. “It gives you a sense of how conflicted the public is, how hard it is to actually pull together a winning coalition,” he says.

RELATED: Andrew Scheer thinks he can actually build a pipeline

The next federal election will, once again, likely be decided by the vote-rich 905 belt that cinches Toronto. Darrell Bricker, CEO of Ipsos Public Affairs, believes the notion that Canadians vote one way provincially and another federally is outdated and has been replaced by calciﬁed “blocks” of conservative and progressive voters; the GTA suburbs full of new Canadians are the only true swing vote left. Those voters like law-and-order issues and lower taxes, so unless the Conservatives offend them in some way, they should present an opportunity for Scheer, Bricker says. “What the Conservatives really want is to replay the Ontario election,” he says. “If that’s what happens, they win—almost regardless of what happens in the rest of the country.”

However, Lyle’s research suggests that the carbon tax the federal government will impose on recalcitrant provinces on Jan. 1 is not the kiss of death the Tories are hoping it will be in Ontario. His most recent survey, from September, shows that 40 per cent of Canadians support a carbon tax and 27 per cent oppose one, with the strongest resistance in Atlantic Canada and Alberta. In Ontario, there’s a 20-point advantage in support of a carbon tax. “It’s not working the way it’s supposed to be working for the Tories,” Lyle says.

Strahl, for his part, believes the biggest risk is if world events overtake the domestic political narrative in 2019, turning the election into a proxy war. “The Liberals, I believe, would like to run against Donald Trump, Stephen Harper, Doug Ford and Andrew Scheer, in that order. Andrew is a very hard politician—a very hard leader—to demonize­­, because he is a genuinely pleasant person . . . he isn’t seen as a scary right-wing fringe guy,” Strahl says. “In a head-to-head battle between Andrew Scheer and Justin Trudeau, I like where that will end up.”

For Scheer, the best adventure to choose may be the smiley nice guy who isn’t afraid to get angry once in a while.