Stephen Maher: How the Conservative leader survived the first caucus meeting, as the party splits over the handling of social issues 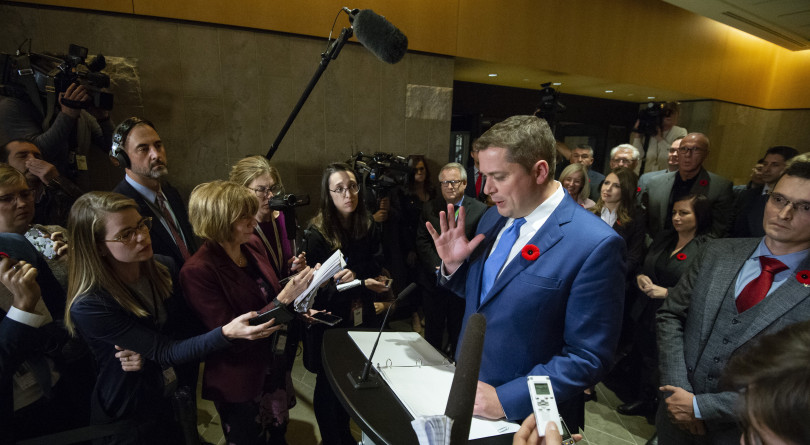 Andrew Scheer, who last week looked like a dead leader walking, has made it through a gruelling caucus meeting and looks ready to fight all the way to the party’s convention in April, where he will likely lose a leadership review vote.

While Scheer can breathe a sigh of relief, Conservatives interested in winning the next election are worried that Scheer will double down on social conservative messages that might help him fight that leadership battle but damage the party in the process.

On Wednesday, when Conservatives gathered behind closed doors for their first post-election caucus meeting, I am told that fewer than 20 MPs stood up to vote for the provision of Michael Chong’s Reform Act that would have allowed the caucus to fire Scheer.

The number might have been different if it were a secret ballot, but it was not. MPs had to stand, while their leader looked on, and claim the right to show him the door. After a few hours of wrangling and voting, MPs eventually went to the mics to talk about what went wrong in the recent election.

It appears there are two views on this. The socially progressive side, led by Calgary MP Michelle Rempel, thinks it is a mistake to allow the party to be dragged into debates over abortion and same-sex marriage. The other side—who think Scheer should not be afraid to stand for his beliefs, whatever they are—is led by Edmonton MP Garnett Genuis.

After the long and difficult meeting, Scheer went out to talk to reporters. He was asked whether he believes being gay is a sin. He did not say ‘no’, but promised to protect the rights of all Canadians, presumably including the sinners. This refusal to discuss his own feelings about spiritual matters hurt him in the campaign, particularly in Ontario and Quebec. Olympic champion Sylvie Fréchette, whose campaign was hampered when the party contradicted her on abortion, spoke for many in her province when she said, after the election, that she has “more balls” than Scheer.

The people around Doug Ford are almost as blunt in their assessment, likely in part because they want to distract from the impact Ford’s unpopular provincial government had on the race.

But social conservatives will never accept that their views are the problem. They typically think a better sales job or a more honest approach is all that is required. LifeSiteNews’s Jack Fonseca, for instance, concluded in a post-election column that ‘Scheer compromised beliefs, giving Trudeau an easy win.’

The party sent Genuis to deliver a similar message on CTV’s Question Period on Sunday, saying that the party needs to work harder to get Scheer’s message out. He also suggested that anti-Catholic bigotry was behind the media coverage on these issues, referencing attacks on John F. Kennedy, a not very persuasive argument to be making in 2019.

It’s interesting that Genuis, who was kept on the sidelines during the national campaign, is now out defending Scheer, a signal that the leader intends to stand his ground on religious issues. And potential leadership rival Peter MacKay, who last month said that social conservative issues were like a “stinking albatross” around Scheer’s neck, on Monday was playing the good soldier, sharing the new line: If there is an stinking albatross around Scheer’s neck, it was put there by the media, who are presumably motivated by anti-Catholic bigotry.

Scheer can expect supporters to rally around him, including straight male commentators who don’t have to worry about abortion access or anti-gay discrimination.

Conservatives who would like to get rid of Scheer are afraid now that he will appeal to social conservative activists to try to win the leadership review vote. Christians opposed to abortion and same-sex marriage have played an important role in the party in recent years, helping give both Scheer and Ford their leaderships. Thanks in part to organizational work by pro-life activists, the Conservative social conservative caucus is more powerful than before.

They are no doubt closely following the moves of their allies in Alberta, who are  pushing a bill that would give health-care providers the right to refuse to provide medical procedures they dislike, a backdoor attack on abortion rights.

I hope I won’t be accused of anti-Catholic bigotry if I suggest that a good number of Canadians, many of whom might vote Tory, have no patience for this kind of thing, and that the Conservatives should take care not to link the party to highly organized but politically marginal groups.

We are unlikely to have another election before Oct. 19, 2021, when MPs first elected in 2015 will have qualified for pensions, at which point they may feel braver in confidence votes. The Liberals will likely want to go before June 22, 2022, the likely date of the next Ontario election, so that they can run against Ford again.

I don’t think the Conservatives need to be in a hurry to rethink their environmental positions, because so much is likely to change before we go to the polls again, in particular an election in the United States that will either give heart to opponents of a carbon tax or show that the world is moving to cut emissions.

But I don’t think Conservatives have as much time to clarify where they stand on social issues. Scheer may be tempted to follow in the footsteps of Stockwell Day, whose leadership of the Canadian Alliance ended in confusion and defeat. Stephen Harper, who beat Day to take over the party, represented the less religious side of the party. That is the side of the party that can win again.

A lot of Conservatives are well aware that they are at a fork in the road and one way leads to an electoral dead end. I doubt that they will let Scheer steer the party that way past April.