Andrew Scheer's path to leadership of the Conservative Party

Tories seem ready to unite around their new leader. Will enough Canadians join them to make him a threat to Justin Trudeau in 2019? 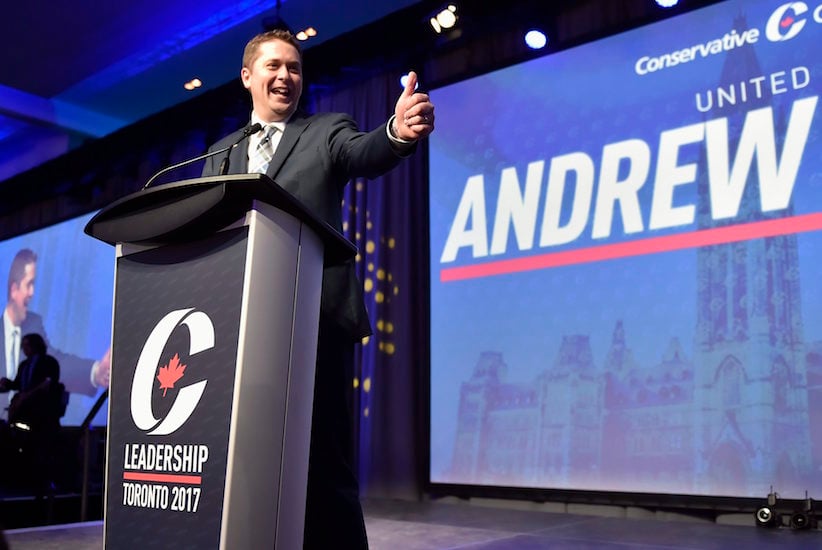 Andrew Scheer will have to get used to the limelight.

As former House Speaker during the Harper majority government—the youngest ever to hold the role at the age of 32—he gained respect from caucus, but that never translated into name recognition away from Parliament Hill. Throughout the Conservative leadership campaign, he never made the front pages. And in the polls, he was never even close to the lead.

But in a preferential ballot system for Conservative Party leadership, Scheer’s combination of mild-mannered social conservatism, caucus credibility, a smattering of red meat policies, and a sense of continuity from the Stephen Harper government—which many Tories look back on fondly as 10 years of electoral success—were together enough to vault the Saskatchewan MP to become the next leader of the Conservative Party.

Tories seem ready to unite around their new leader. Will enough Canadians join them to make him a threat to Justin Trudeau in 2019?

From the moment he entered the Conservative leadership race last September, Scheer seemed content to fly under the radar. He boasted the support of 20 members of caucus from the start, giving him credibility as a serious contender, but by then the nation was more interested in debating Kellie Leitch’s “Canadian values” test. Scheer, meanwhile, was talking about party unity. (He didn’t get much media attention.)

When O’Leary was on the verge of dropping out in late April, Scheer pitched for O’Leary’s support—and hopefully the backing of the 35,000 new members the TV celebrity boasted about signing up. Instead, O’Leary threw his support to Bernier–making the libertarian MP from Beauce, Que. appear all but certain to win.

“We knew from the beginning there was no scenario where anybody—and certainly not Andrew—would win this on a first ballot,” says Scheer’s campaign manager, Hamish Marshall. “That means being a strong second choice, and that limits what you can say. You can’t be a polarizing figure and maintain being second choice for everyone from [social conservative] Pierre Lemieux supporters to [fiscal conservative] Lisa Raitt supporters.”

Many Conservative insiders said there was no single alternative to Bernier, since Scheer, Erin O’Toole and others seemed to share second-tier status. Nonetheless, Scheer quietly found himself second in the polls. Still, he couldn’t go on the offensive.

“There was this ongoing continuous decision-making about how forcefully we should attack Max,” says Marshall. “What we would see is whenever we attacked Max, Erin O’Toole would get a bit of a bump [in the polls.] People would say ‘I want a unity candidate but I don’t like how Andrew’s attacking somebody.’”

Scheer appeared to walk the “get attention, but don’t offend anybody” tightrope to perfection. On a surprising first ballot at the convention in suburban Toronto, Scheer garnered nearly 22 per cent of the vote, putting him within striking distance of Bernier with 29 per cent, and giving him needed daylight between him and his closest competitor, Erin O’Toole, who stood at less than 11 per cent in third.

By the time the 13th, and final, round of ballots were counted, Scheer vaulted ahead of Bernier to victory, winning 51 per cent of the vote in a heads-up contest.

Scheer not only managed to become the primary contender to take on Justin Trudeau in 2019 but, in the process, managed to leave many Canadians wondering who, exactly, is this new leader of the Conservative Party of Canada?

Growing up in Ottawa, Scheer was the kind of kid who skipped gym class in school to check out Question Period at Parliament Hill. At 25, a year after moving to Regina with his wife, he became an MP by defeating a popular NDP candidate by less than 1,000 votes.

Now 38, Scheer is often called “Stephen Harper with a smile.” He’s said he doesn’t mind the description because he maintains it was the party’s image—not Conservative policies—that cost them the last election. During his victory speech he called Harper “a man whose leadership I enjoyed working under and a man who will always stand tall in the conservative movement.”

“If we become what [British Prime Minister] Theresa May called the “Nasty Party,” we can’t expect to tap into people’s hopes and dreams,” says Marshall.  “We need to be united. If we go down the path of niche ideologies, we’ll have fewer votes than last time. To beat Trudeau, we need to grow the party.”

With consensus-building in mind, Scheer announced policy ideas aimed at both social and fiscal conservatives. He pledged to withhold federal grants from universities that stifle debate on campus in the name of political correctness. Property rights would also be added to Canada’s Charter of Rights and Freedoms.

Scheer, a father of five who sends his children to a private Christian school, also put forward a new policy to give tax relief to parents who put their kids in private school or homeschool. And perhaps to appeal to the populist sentiments within the Conservative Party, he mused about making gas stations put flags on pumps showing the country of origin for their fuel.

Scheer equally pledged to remove GST/HST from home energy bills and kill any carbon tax Trudeau implements. Lastly, he promised he would balance the budget.

In other words, nothing so polarizing that it would drive Conservatives apart or Canadians away. However, Scheer took a gamble with rock-ribbed social conservatives by saying he’s with them but would continue Harper’s strategy of keeping hot-button issues from gaining prominence.

“I had some concern about his position on abortion and gay marriage,” says Luc Berthold, one of four Quebec MPs who ultimately endorsed Scheer, despite Scheer’s previous pro-life support and attempts to re-open debate on traditional marriage. “He said he has his personal view on that but he’ll respect the position members took at the last convention. That convinced me I could be okay with him.”

In short, Scheer promised not to re-open the debate on abortion or gay marriage.

“He’s been in the business a long time. He knows how the system works,” says Norm Vocino, a former campaign staffer for the O’Leary campaign in Quebec. “That’s what this party needs.”

Never mind that few Canadians will have heard of Scheer until Saturday night. “Unless you’re the leader of the opposition,” Marshall says, “nobody has a clue who you are.” Now that will change.

But if Scheer was able to slip quietly by the Tory field, there will be no getting past Justin Trudeau without making some waves. To beat the sitting Prime Minister, Scheer will have to show he’s more than just a patient strategist, but can be a compelling figure on the national stage.

For his next race, he can’t bank on being everyone’s second choice.