Paul Wells: Industry is a good fit for the ambitious Champagne. Garneau will be a dignified presence in foreign affairs. And making an impact will be a huge task for either of them. 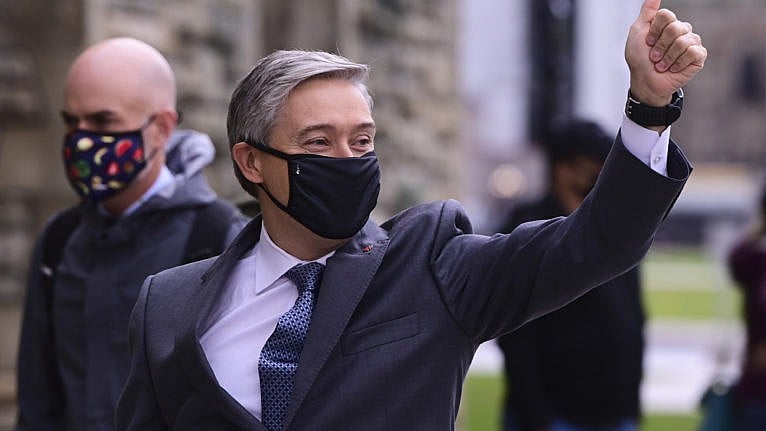 “For once,” a Liberal I trust told me, “it really is about family.” Apparently Navdeep Bains makes time for a family call every night when he’s on the road—well, he used to, I mean who’s on the road any more? Over the holidays, his oldest daughter told him that if he runs again, she’ll be heading off to university by the time he finishes the next mandate. Assuming it’s a majority. This corner levels no penalty for filial optimism. Out goes Bains. He’ll serve the rest of his term from the back benches, and that may not be long.

Justin Trudeau decided early he likes modest cabinet shuffles. This one has a lot to be modest about. Bains has been this government’s only Minister of Innovation. Before 2015 the job title was Minister of Industry, and since 2019 “Industry” has been tacked back onto the end of Bains’s title. But if you’re going to keep pretending the job’s about innovation, the simplest patch would be to move Marc Garneau, who rode three times in space shuttles. Instead the job goes to François-Philippe Champagne, who’s been foreign minister.

A demotion for Champagne? I’m not so sure. I know some people who worked for Champagne were hoping he’d get the Industry—sorry, innovation—portfolio a year ago. Industry is a good fit for an ambitious pol: it spends a lot of money, it has stakeholders with clout, it puts you in front of Canadian voters full-time, rather than sending you off jetting around the world to spend time with people who don’t vote here. I doubt Champagne is at all displeased by this turn of events.

Garneau to Global Affairs, then. (It’s like Foreign Affairs, but more innovative.) He’ll be a dignified presence at any international conference he attends. He won’t commit gaffes. But it’s hard to imagine him taking the lead with members of the Biden foreign-policy team or with European leaders as the world tries to sketch the contours of a post-Trump democratic coalition. If it does try, I mean maybe I’m being overly optimistic. Despite a c.v. that was already formidable before he ever reached orbit a lifetime ago, Garneau has not been a take-charge guy in government. Trudeau’s listless attention to international files has begun to be noticed by Canada’s international partners, as witnessed by the drubbing Canada sustained in the U.N. security council election. And Stéphane Dion’s botched appointment to two concurrent European diplomatic posts. And the revolving door Trudeau has installed at the entrance to Fort Pearson: Garneau becomes the fourth foreign minister in five years, and there’s no particular reason to expect he’ll keep the job after the election.

The most recent annual report from Freedom House, a U.S. non-governmental organization dedicated to tracking the success people and nations have in promoting civil rights and democratic freedoms, carries the subtitle “A Leaderless Struggle For Democracy.” Lately I find the adjective in that phrase haunting. It’s great to point out that Donald Trump was a problem, but the problem is global, it’s becoming entrenched, and who’s the solution? Is it actually inconceivable that a Canadian could provide part of the answer? In Washington last week we saw the passionate intensity of the worst. The other side seems to lack all conviction. Maybe Garneau, with counterparts from other countries not yet lost to the mob, will help lead a change. This would be excellent news if it happened.

But in a government of quite unprecedented centralization, where the centre struggles to deliver anything but more ideas for subsidies, it’s fair to ask, as I did two years ago almost to the day, what a cabinet shuffle is for. There would be much for François-Philippe Champagne to reform at Industry or Innovation or whatever they want to call it, if he wanted to, if he were granted any leeway. That department is an elephant’s graveyard of earlier governments’ half-baked subsidy programs. In 2017 Kevin Page and his colleagues at the University of Ottawa found $23 billion in existing annual spending from 147 programs and other “activities” to promote “innovation.” Bains made no attempt to rationalize that inherited mess before adding new programs.

The result is predictable. In the banking world, firms hire “quants,” number-crunching specialists to navigate the opportunities the market offers. In Canadian business, companies hire specialists to navigate the forest of subsidies and incentives available from the federal government. This is full-time work because the programs are too numerous and make too little sense. In many cases there is no decision a business can make on its core area of competence that will make as speedy a difference in its balance sheet as its success or failure in capturing the next bit of government help. Here again, the results are predictable: Canadian firms don’t research new ideas, they research the subsidy landscape. An arms-length advisory panel used to deliver this news to Canadian governments every two years. In 2015 Bains released the panel’s most recent report on the lousy results of the Harper government, and then abolished the panel. In its place he had a sunshiny report prepared in-house, which everybody properly ignored.

Bains used to have a simple measure of success in his portfolio: “Ten Shopifys wouldn’t be so bad,” he’d say. Fair enough. What are we to make of the fact that the counter remains stuck at one? Meanwhile Sidewalk Labs fled Toronto’s Quayside project, Element AI sold to U.S. investors for a lot less than its claimed value, and Bombardier is out of the commercial aircraft business.

Making any impact at all on that kind of departmental performance would be a huge task for any minister. But this will be Champagne’s fourth cabinet post in five years. The hatches are already battened down for an election. With the inevitable futzing around in its aftermath, the election will swallow half a year. Then it’ll be time to shuffle Champagne again. I keep reading about ministers being promoted or demoted and I keep wondering, how on earth can anyone claim to tell which is which?